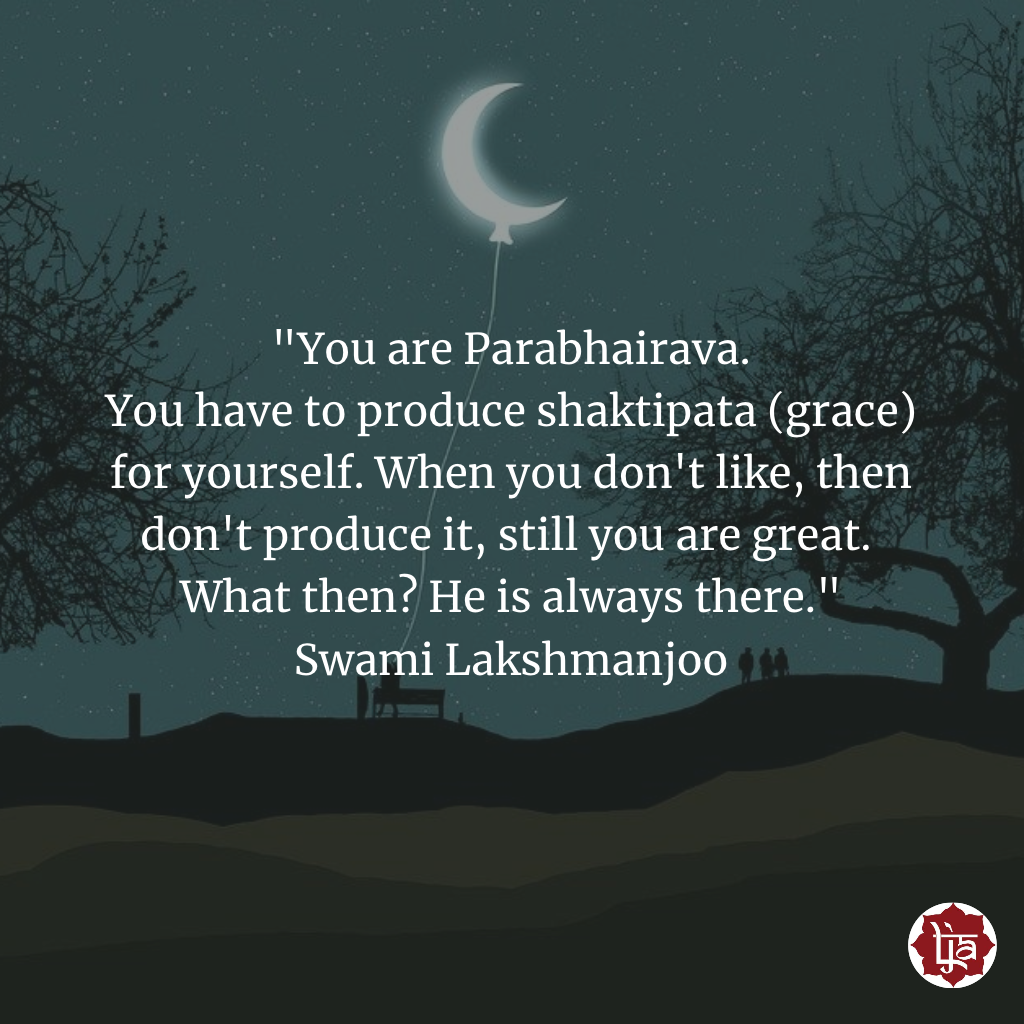 Due to the Mahasamadhi Celebrations and Fall Retreat, we will take a break from posting the weekly excerpts. We hope you can join us for these events.

In this excerpt, Swami Lakshmanjoo explains why YOU are really Parabhairava (supreme state of God Consciousness). This is from the Bhagavad Gita, In the Light of Kashmir Shaivism, chapter 8 by Swami Lakshmanjoo.

Antarālīna tattvaughaṁ, where all of these differentiated thirty-six elements and one hundred and eighteen worlds are consumed inside (antarālīna tattvaughaṁ). And that state which is cid-ānanda-ghanaṁ, filled with all consciousness and all bliss. Yat-tattvaṁ śaivadhāmākhyaṁ, which is the reality, the abode and residence of Lord Śiva. Tad-om-ityabhidhīyate, that is [the meaning of] oṁ.

And that oṁ you should recite inside.272 “Recite” means you should live in that oṁ.

Yaḥ prayāti tyajandehaṁ [verse 13], at that time [one] who shatters this physical body at the time of death, sa yāti paramāṁ gatim, he is sentenced to that supreme state of Parabhairava.274

Pārtha, Hey Arjuna, O Arjuna, who in this way, ananyacetāḥ, being one-pointed and one-pointedly remembers Me who is Parabhairava, and remembers Me always, in each and every activity of his daily routine of life in his lifetime, tasyāhaṁ sulabhaḥ pārtha, for him, I am at his disposal, nitya yuktasya yoginaḥ, because that yogi is always a yogi. He has not accepted any other activity besides this yoga.

It is said somewhere [in a Shaivite text], he gives reference:

And Bhaṭṭanārāyaṇa, in his [Stava] Cintāmaṇi (he was a Shaivite master, one of the ancient Shaivite masters), his reference also Abhinavagupta puts in his commentary:

If, in the period of one twinkling of the eye, You make somebody, some fortunate soul blissful by fixing him in the state of Parabhairava, kim na saṁpādayiṣyasi, then what more could You do? You have done everything for him.277 So whatever is being done in one twinkling of an eye, that is all [that is needed].278 There is no effort, there is no [need] to insert effort. There, tīvra tīvra śaktipāta279 is found and that is under your control, not under the control of Parabhairava. That tīvra tīvra śaktipāta is under your own control!

This is the Shaivite Philosophy. 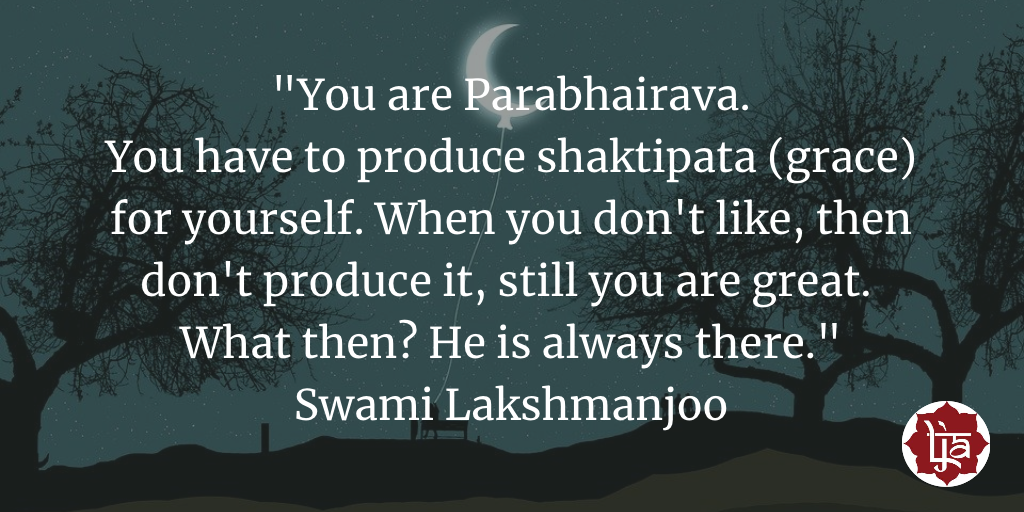 JOHN: How is it under your control? How?

See footnote 228 for an explanation of the four levels of vāk.

273 “Māmanusmaran means you must remember Me repeatedly. Remember Me and then remember Me again, afresh. Don’t put only one push of memory of God, that won’t do . . . it will fade. . . . Refresh this push again and again. . . . That is anusmarana; repeatedly you have to remember Him.” Bhagavad Gītā (1978).

274 Or one “who leaves this attachment for body [during their life-time]. . . . This is tyajan dehaṁ, he must not be attached to this bodily existence through mind. That is a real death.” Ibid.

275 “Utkrānti [means] coming out from this physical body and getting entry in God consciousness–that is utkrānti. That is ekadeśena; eka-deśena means God consciousness is situated somewhere [else].
“This kind of teaching that is found in Bhagavad Gītā is absolutely incorrect. Sāra śāstras does not recongize this kind of dhāraṇa. Sāra śāstras say, “why to go? Where to go? What is up and what is down? Down below is Lord Śiva, up is Lord Śiva.
“Yadi sarvagato devo vadotkramya kva yāsyati. Athāsarvagatas tarhi ghaṭa-tulyastadā bhavet. If Lord Śiva is everywhere, then this body is also Lord Śiva! Why should you leave this body and go in higher level–what is there? If Lord Śiva is not everywhere, athāsarvata, if He is only in seventh [heaven], not in other worlds, ghaṭa, then He is [like] a pot, then He is just like [an inanimate object].”
Swami Lakshmanjoo, Tantrāloka, 14.33-34 (1980).

278 “Iti yeṣāṁ śaṅkā. So, those people who consider, who take this for granted that, ‘it does not matter if you think of God for your lifetime; if you have thought over God and concentrated on God for your lifetime, and at the time of death you don’t remember Him, you will be destroyed, you will be ruined,’ those people who say this, tān vīta śaṅkānkartum, this decision is incorrect . . . and this point is declared by this śloka: ananyacetāḥ satataṁ yo māṁ smarati nityaśaḥ, that person who remembers Me in his lifetime, always he will be with Me and he will not be destroyed at the time of death [even] if he does not think of Me.” Bhagavad Gītā (1978).

(source: Chapter 8, Bhagavad Gita, In the Light of Kashmir Shaivism, by Swami Lakshmanjoo)
also available as on-demand video (without book)
All Content is subject to Copyright © John Hughes.