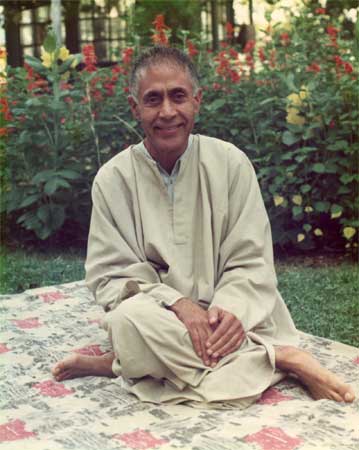 The Universal Shaiva Fellowship is happy to announce the Mahasamadhi Celebration of our beloved Gurudev Swami Lakshmanjoo. This grand occasion will take place on Sunday, the 22nd, of September 2013.

Swamiji left his physical frame twenty-two years ago in New Delhi (Noida), India, on September 27, 1991. Since that time, each year we joyously celebrate his Divine life and remember him by performing a traditional “Havan” or “Fire Ceremony” along with worship and the recitation of sacred hymns.

HAVAN: This grand celebration will take place at our Fellowship Center located at 10925 Stever Street in Culver City, California, U.S.A. The havan will begin in the morning at 10 a.m. and culminate in the afternoon with the taking of prashad (food spiritually blessed by the Master) consisting of very tasty vegetarian Kashmiri preparations and sweets.

There is no charge for attending the Mahasamadhi celebration but we encourage donations to help pay for the Havan expenses. Each year when Swamiji prepared for his Master’s Havan ceremony he would ask his disciples to donate towards the Havan. He said that at this time begging for your Master is always considered to be appropriate and befitting.

RETREAT: On the day following the Havan, Monday, September 23rd, through Thursday the 26th, the Fellowship will hold its bi-annual four-day retreat at the Culver City Center.

Each day will begin at 9 a.m. with meditation and recitation of Sanskrit verses Swamiji selected for worship.

Through the sacred revelations given to us by Swamiji we will examine a number of important texts central to the philosophy and practice of this great tradition of Kashmir Shaivism.

Each day we will study relevant sections of the following:

Tantrāloka: We will continue with the examination of Swamiji’s revelation of Abhinavagupta’s 9th chapter of this seminal text. This chapter deals with the following topics:

Bhagavad Gita: Video recordings taken in Nepal in the Spring of 1990, of Swamiji’s revelation of the Kashmiri recension of this sacred text based on Abhinavagupta’s commentary. This recording represents one of the last revelations given to us before Swamiji left this world. As he tells us in the beginning, this revelation is new and flows out of the supreme elevation he had recently experienced.

We look forward to seeing you.