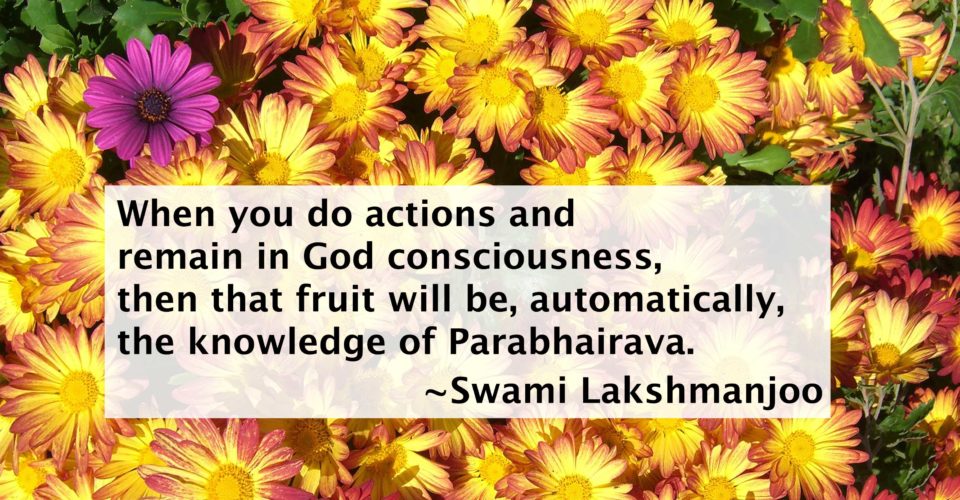 Swami Lakshmanjooo explains the yoga of knowledge and action in this excerpt from Chapter Three, verse 5-9, of the Bhagavad Gita, in the light of Kashmir Shaivism.

When you do actions and remain in God consciousness, then that fruit will be, automatically, the knowledge of Parabhairava. ~Swami Lakshmanjoo

It is well said in Shaivite philosophies:

Yataḥ paravaśa eva kāyavāṅmanasāṁ parispandāt [comm.]. Paravaśa eva means dependently. He will be dependent to do something. Without doing something he won’t remain [alive]. He won’t live.

DENISE: So that’s action too?

Karmendriyāṇi, all organs of action, one who will squeeze all of his organs of action, his own organs and ya āste, who just sits, manasā smaran, through mind, what will he do? Indriyārthān, through mind he will be thinking, he will go here and there, and his disciples will think, “our master is in samādhi.” [But] sometimes he goes to sleep.

Indriyārthān, he goes here and there through mind. Mūḍhācāraḥ sa ucyate. Mūḍhācāraḥ, he is a fraud and he is not a good master. He is [more] wretched than an ordinary person. An ordinary person who works day and night in the garden and goes on digging the ground and everything, that person is far better than that yogi who sits like this [Swamiji sits straight].

The one who is always walking, talking, and fully aware of God consciousness while walking, while talking, while doing gup-shup (idle conversation), and seeing, shaking hands, karmen-driyaiḥ karma yogam asaktaḥ, without being attached to all of these. He sees . . . he [walks] on the pathway for a change, but he does not know where he went and wherefrom he returned. Because, it is just like rathyaṁ grāmaṇe tṛṇaparṇādivat. When you walk on the roadside, you will see [objects] on the roadside here and there. When you go in motorcar, in motorcar ride, you see leaves and everything on the right side and on the left side of your car, but those impressions of leaves do not remain in your mind; it is just nirvikalpa63.

[Lord Kṛṣṇa]: So you should do action, always do action with God consciousness. Karma jyāyo hyakarmaṇaḥ. Karma is, action is very superior, most superior, more superior than discarding actions. Śarīrayātrāpi ca te. Śarīrayātrā means this bodily existence also is dependent to karma. Without karma, bodily existence . . . the body won’t exist, the body won’t live, it will be shattered to pieces.

SWAMIJI: No, these actions will bear fruit [only] when you ask for them, when you ask for fruits. When you do actions and remain in God consciousness, always be introverted and do all actions, then there will be no fruit from that. And that fruit will be, automatically, the knowledge of Parabhairava. 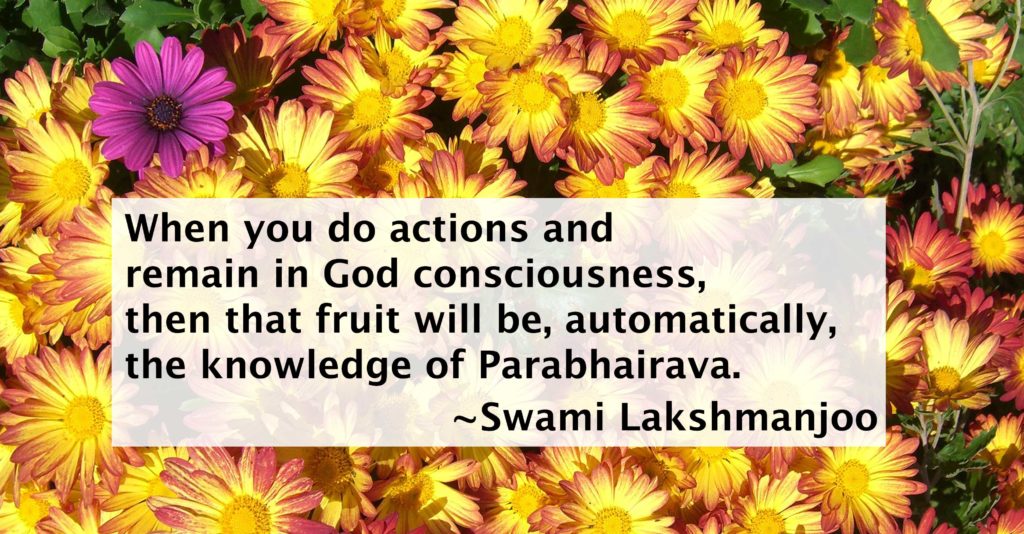 “[For example, in] some peacock painting, citra vijñāna, there are differentiated things, there are so many various colors in that painting. But we don’t perceive those various colors one by one. What do we then perceive? We perceive, “this is a peacock.” That is Lord Śiva! The totality, that is nirvikalpa. These variations of those colors is savikalpa.” Ibid.

“When you say idam (e.g., “this is such and such a thing, this is a book, this is a pot”) . . . this is just directing you to limitation only, not unlimited thing. . . . When you perceive some particular object, it means the other objects are not included there, so it is limited. . . . Where there is limitation, that is vikalpa, it is not nirvikalpa. Nirvikalpa is that state where there is unlimited surface of understanding.” Ibid.

“When that [absolute] consciousness descends in the cycle of differentiatedness (bhedasāratālabdhatayā), then artha bhāvaṁ kuryat, then “this is right, this is wrong, this is pot, this is that and this is that,” this kind of [discriminating] activity takes place. Otherwise, in the state of absolute consciousness, there is no [discriminating] activity at all; it is one with God consciousness. But these vikalpas, these differentiated aspects of life cannot exist without coming out from that nirvikalpa bhāva.” Ibid.

“The first flow of [perception], it is nirvikalpa (without impression). . . . That is prathama anusaṁdhāna, the first movement of realization. That is nirvikalpa, that is the reality of God. . . . it is just aham (I-ness), it is not idam (this-ness). First there is some sensation, after that sensation you come to this [realization] that, “this is a pot, this is a jug, this is tape recorder.” This is the next step from that point of God consciousness, state of God consciousness. Otherwise, there is only sensation, vibration, some vibration of coming out. You don’t come out first. It is only the vibrating force that makes you to go outside.” Ibid.

“When I begin to deliver lectures with the help of a book, it is savikalpa knowledge. When I deliver lectures . . . without the help of [books], without keeping [books] in front of me . . . that is nirvikalpa, that knowledge is nirvikalpa. . . . It is only residing in the oneness of God consciousness because there is no need of getting help from books, from other sources.” Ibid.

“Memory exists through nirvikalpa, otherwise memory would not exist at all.” Ibid.

“How that past knowledge is united in this present knowledge? That is antarāla, that is the gap, the gap [between] these two (present and that past) . . . these two knowledges of present and past were absolutely separate from each other, so how could they be united [in memory]? There is only one way to unite them, i.e., by this nirvikalpa state, which is always there in the gap; and that antarāla, the state in-between the two objects, it is saṁvit ātmakameva, it is just consciousness, that is God consciousness.” Ibid.

“You have to rise to nirvikalpa state through vikalpa in āṇavopāya and śāktopāya. But in śāmbhavopāya, you have not to rise [with vikalpa]. You have to get establishment in an instant with awareness, with awareness of śāmbhava state. And that is the real samāveśa (absorption).” Tantrāloka 1.179 (1972).

Source: Chapter Three, verse 5-9, The Bhagavad Gita, in the light of Kashmir Shaivism
by Swami Lakshmanjoo
also available as video download
All Content is subject to Copyright © John Hughes