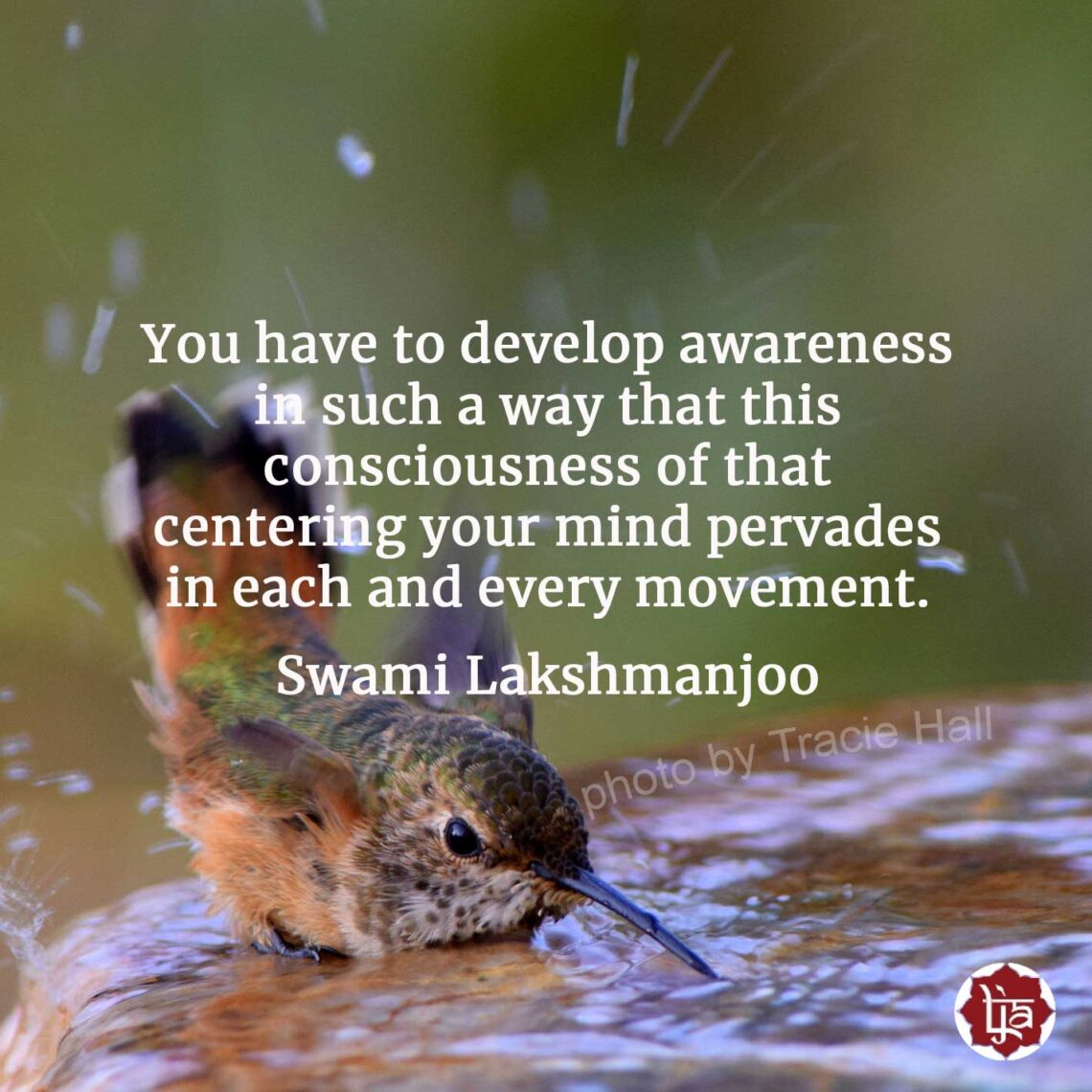 In this excerpt from Abhinavagupta’s Tantraloka, Chapter 5,  verse 11-15) Swami Lakshmanjoo revealed why we should practice and how (in Kashmir Shaivism). “How you should travel on that individual way, he says in this next śloka.”

“You have to develop awareness in such a way that this consciousness of that centering your mind pervades in each and every movement, in dull movement and conscious movement also.”  ~Swami Lakshmanjoo 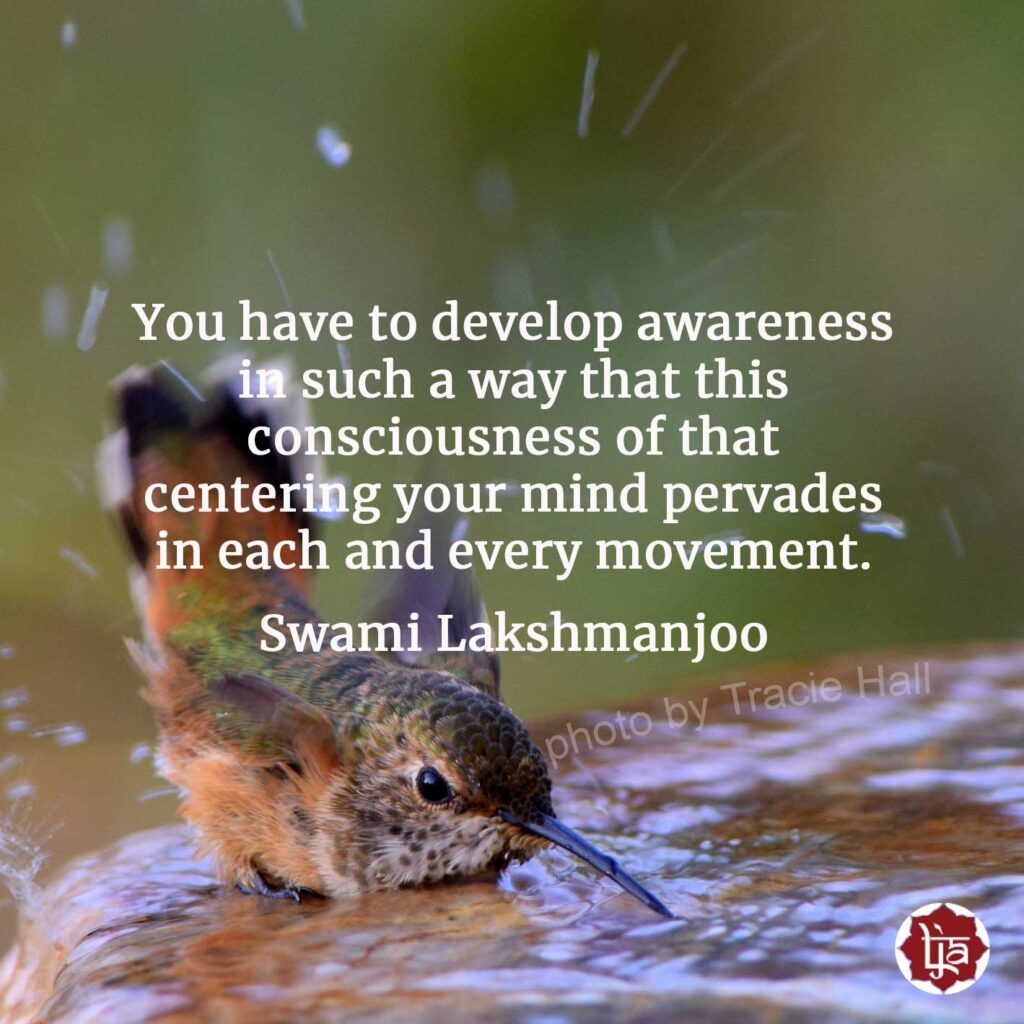 This is reference here.

. . . in intellectual body, in the body of prāṇa, buddhau prāṇe, and in the elementary body, dehe; and deśe not only in there, in external space, form . . .

. . . yā jaḍatā sthitā, this jaḍatā is already there existing. Tāṁ tirodhāya medhāvī, the one who is a realized one, the one who is filled with awareness, he has to subside that jaḍatā, tirodhāya and give rise to that consciousness, give rise to that conscious state in the beginning and in the end and in the center.

DEVOTEE:  But awareness is always growing in the extremities at first.

And you have to develop awareness in such a way that this consciousness of that centering your mind pervades in each and every movement, in dull movement and conscious movement also.

DEVOTEE:  And then also in the progression of this samādhi, first in the point between waking and sleeping, and then with complete freedom moving from waking to sleep.

DEVOTEE:  Without loss of awareness.

SWAMIJI:  It is why krama mudrā is also there.

DEVOTEE:  That these three are separate?

SWAMIJI:  . . . that these three are separated from God consciousness.

DEVOTEE:  But in the course of āṇavopāya this winding up is emphasized?

SWAMIJI:  Winding up is emphasized.

DEVOTEE:  Though in śāktopayā this course of illusion is short.

Satyatas, but, tad abhinnam syāt tasyānyonyavibhedataḥ, but that is tat abhinnam, in fact, in true sense, that God consciousness is adjusted in each and every individual state of being; in prāṇa also, in intellect also, and in the physical body also.

SCHOLAR:  So this is the real meaning of mantra vīrya.

SWAMIJI:  This is mantra vīrya, yes.

SCHOLAR:  That this is realized internally . . .

SWAMIJI:  Yes, this is mantra vīrya.

Because the limited establishment of three bodies, only three bodies are to be functioned, not the fourth one.

Because the limited establishment of three bodies is existing when one formation out of these three is felt separated from other two formations. This limitedness comes only when you see the intellectual body is separated from physical body and the body of breath; and the body of breath is separate from intellectual body and the physical body; and the physical body is separated from the intellectual body and the body of breath. When you collectively understand and observe what is the reality of that, that is God consciousness. So there is the possibility of rising to God consciousness by these limited ways. So āṇavopāya is no less than śāktopāya in that way. You should not think when you adopt the means of āṇavopāya you are adopting the inferior means, it is not the inferior means; it is really the real means, the real way.

If nirvikalpa state is already there in body, in the body of intellect and in the body of breath, [if] that God consciousness is exactly residing there, if it is true, then what is the use of practice?

DENISE:  To recognize it?

Taṁ vinā dṛṣṭe api adṛṣṭā kalpatvaṁ, although it is there, it is just, rathyāṁ gamane tṛṇa parṇādivat, when you walk on the road, you go in motorcar or chariot or anything or cart; on the road side there are leaves, there are blades of grass, you find them lying down on either side, right and wrong, right and right, right and left; right and left, but they leave no impression in your intellect, no saṁskāra [impression] of those things. In the same way if God consciousness is there existing, they don’t leave that impression. Impression leaves only when you are face to face observing that God consciousness. And that observing God consciousness face to face is done only in practice, is maintained only by practice. So practice is essential for this.