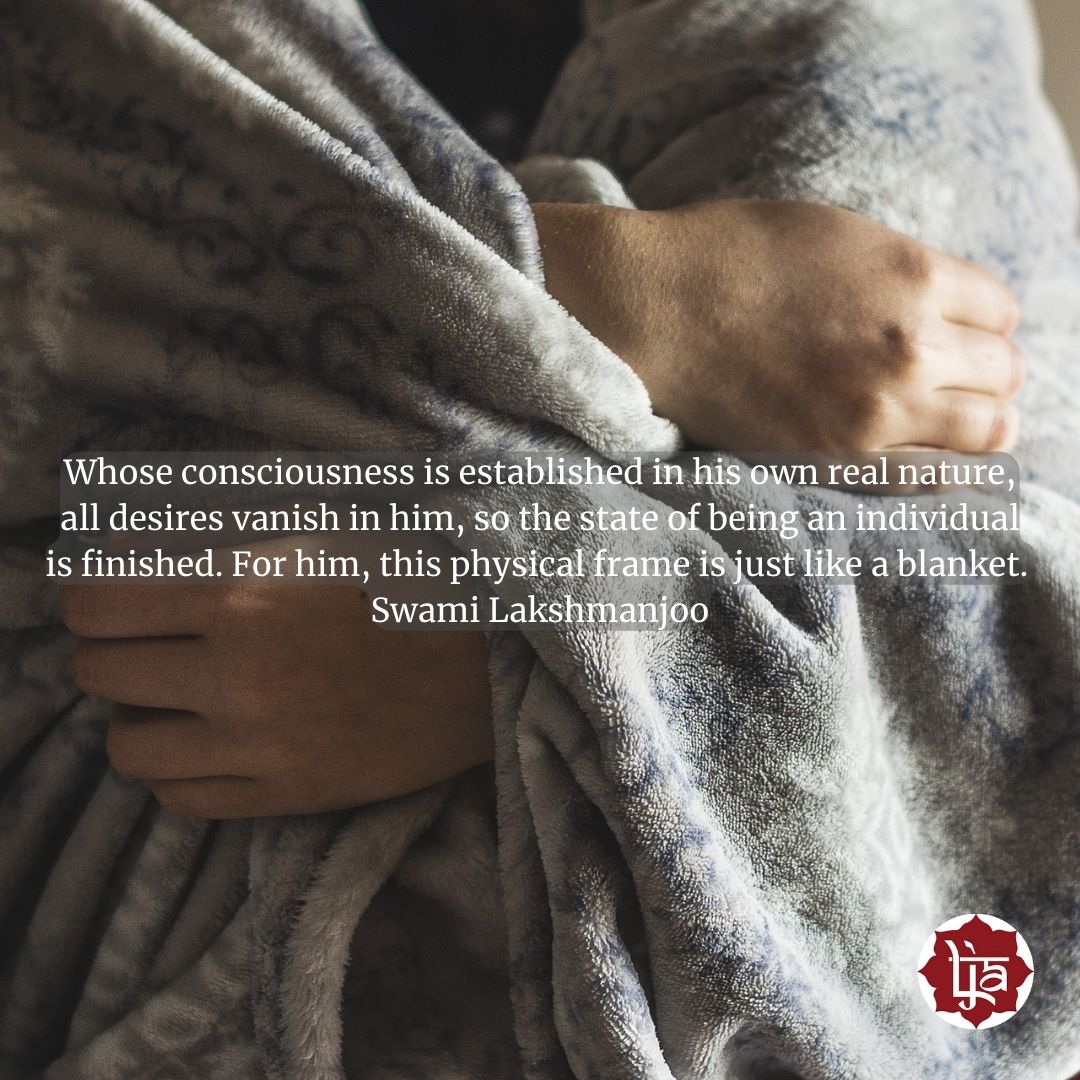 In verse 40 of the Shiva Sutras by Vasugupta, Swamiji explains how the individual is carried by the energies of God towards the objective world and not towards the subjective consciousness according to Kashmir Shaivism. And in verses 41 and 42 he then goes on to reveal what happens to the one “Whose consciousness is established in his own real nature…”

This is an edited excerpt from the transcript of the original audio files of the Shiva Sutras, The Supreme Awakening as revealed by Swami Lakshmanjoo. This is a continuation of the 39th verse of the third awakening, where Swamiji told us that:

“. . . by that desire to fulfill his nature of being, he feels there is a gap, it must be filled, and by that desire bahir gatiḥ, his flow and his movement moves towards the objective world and not towards the subjective consciousness. Thus he is carried from one birth to another birth, from one death to another death, he is carried just like a beast.”

Carried by those energies which have been established, or governed, by the supreme wheel of the energies of God.

And by that āṇavamala, desire rises in you, and by that desire, bahir gati, you are carried in the outside world, not the internal world of spirituality. Hence, your consciousness is diverted towards worldly pleasures.

“When that ignorance covers that Self by the way of treading on vikalpas [thoughts, impressions], then, he cannot perceive this whole universe beginning from earth to Śiva as one with God consciousness. He does not perceive like that. He perceives differentiatedly, in a differentiated manner.”

Then what is the fruit of that?

When on the contrary the grace of Lord Śiva is infused in his consciousness – pārameśa śaktipāta vaśa unmiṣitam – and by that infusion when he contemplates and realizes his own nature in the true sense, then he destroys all desires in himself, and he does not move towards the outside world, on the contrary, he is always centered in his own God consciousness.

That is what he explains in this next śloka.

“That fortunate person whose consciousness is established in his own real nature,
all desires vanish in him, so the state of being an individual is finished.”

Then, that state of being aware that, “I am puryaṣṭaka, I am the body, I am organs, I am the mind, intellect and ego,” that state is over. That means, it is appeased, it is śānta.

On the contrary, his consciousness shines in cit, in his own nature.

In Kālikākrama it is said:

“When one is experiencing the dreaming state and he perceives so many dreams, various dreams, various ways of the world of dreams, when he gets out of it, when he enters in wakefulness, then all of those dreams vanish altogether, no dream is existing at all.”

So, this imagination also becomes true for him.

By and by, by and by, you put your awareness in this imagination that – “this whole universe is nothing but my own Self-nature” – go on meditating on it in continuation and a time will come when you will become one with that God consciousness.

So that yogi is established in that final beatitude of God consciousness, and he achieves that state of nirvāṇa, mokṣa – final liberation.

So how can he say that he is established in God consciousness?

So this theory of yours is incorrect!

For that he puts now the answer.

“He is said to be bhūta kañcukī, these five elements are just like covering for him, and at that moment he is vimukta, ‘absolutely liberated’, and he is patisama, ‘just like Lord Śiva’, and supreme.”

And in the course of time when he leaves this physical frame also, he becomes one with Lord Śiva.

So, for him, this physical frame is just like a blanket, just like some covering. Not like us, just as we do for our physical body, we insert I-consciousness that, “this is my body, this is me.”

I go to some doctor, “please see my pulse.”

But I have no pulse!

In fact, if you go into the true sense, I have no pulse – pulse is for the body.

But the body is unwell, I am always the same.

So this previous sūtra (3.26), in which we have explained, his body is just like that sheath in which we put sword, like that his body exists. But he does not infuse his I-consciousness in that sheath, i.e., sword is sword and sheath is sheath, separate from it.

Hence, when a supreme master reveals to you that supreme [state], from that very moment he is said to be liberated, absolutely liberated, and his remaining portion of his life is just like a yantra, just like a machine.

So he is centralized in his God consciousness for eternity afterwards, and his existence of body is just like a machine, nothing else.

So, what can we say to that wise person who is established in that supreme brahman only for one second; he becomes liberated and he liberates the whole universe.

In Netra Tantra also it is said:

Source: Excerpt from the transcript of the original audio files of the
Shiva Sutras: The Supreme Awakening revealed by Swami Lakshmanjoo