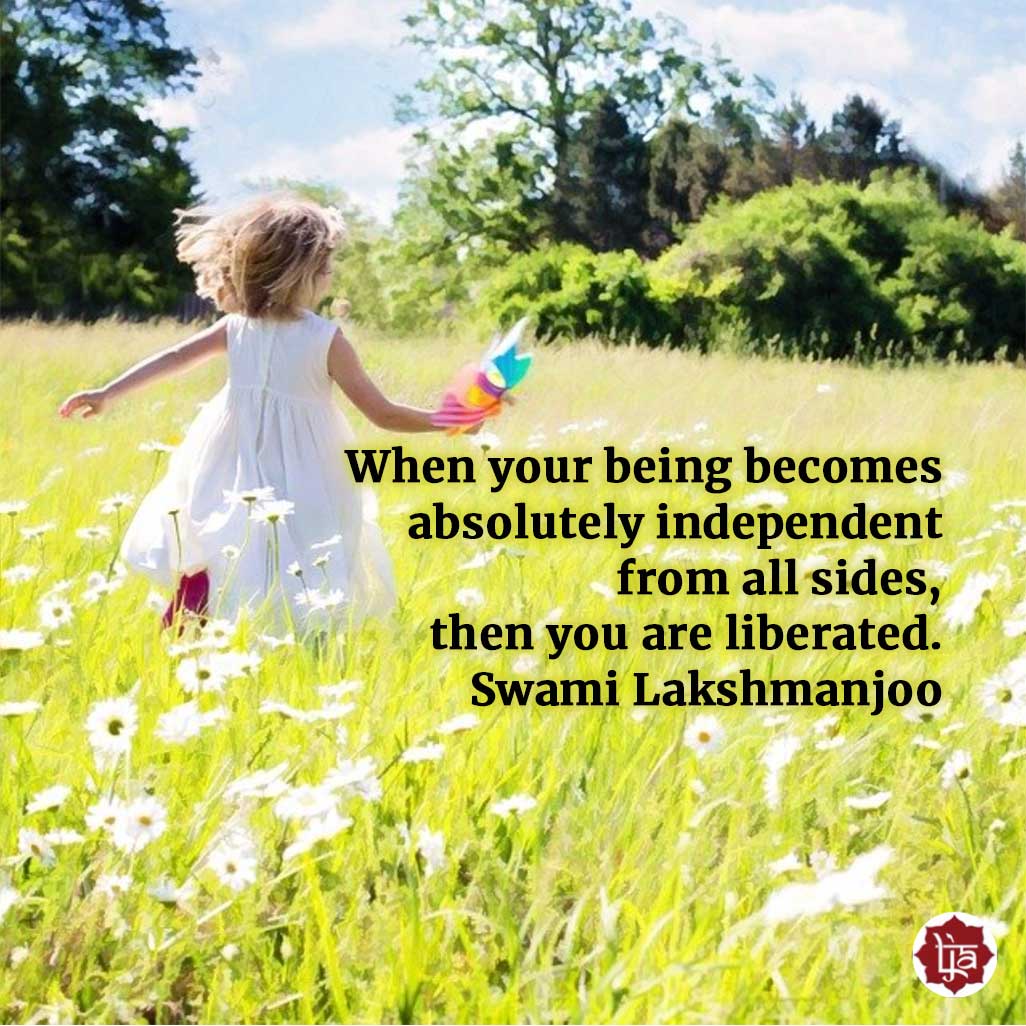 In this excerpt from The Light on Tantra in Kashmir Shaivism, Abhinavagupta’s Tantraloka, Volume One, Swami Lakshmanjoo reveals the nature of liberation (mokṣa). 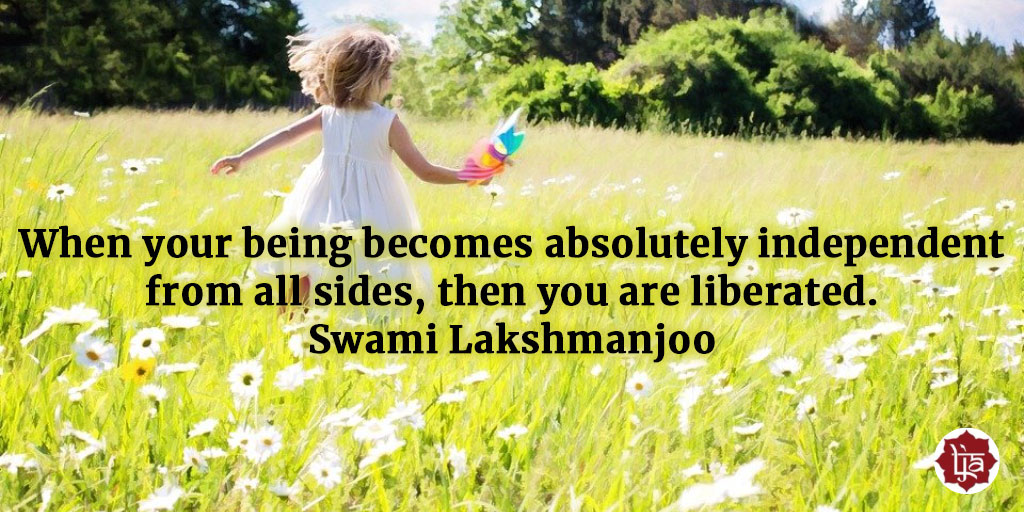 Mokṣa, he explains, mokṣa is only svatantrātma, when your being becomes absolutely independent from all sides. That is mokṣa, that is liberation, then you are liberated.

Without that absolute independence, whatever is existing in this world, if it is tuccha or if it is atuccha, if it is empty (worthless) or if it is worthy, . . .

SWAMIJI: . . . whatever it is, that is not mokṣa. So, there is nothing separately explained as mokṣa except svatantrātma.

The essence that we have to perceive [of that which is] worth perceiving, that essence [of that] which is to be perceived (that is, Lord Śiva), and that perception, as long as it becomes full by-and-by, in succession, as much as it is full, you are near mokṣa. If it is not full, if it is incomplete, you are away from mokṣa. So, that [incomplete] fullness is differentiated fullness. For some masters of some other schools, they consider that full, but in other systems it is not, it is incomplete. So that complete fullness lies only in Shaivism, although they77 are liberated from that saṁsāra of their own (tattat saṁsāra śāntidam78).

Now he explains the same in the thirty-third śloka:

Some masters of [other] schools say that, “rāgādi akuluṣo asmi,” the reality of the Self is [realized] when you are absolutely away from the bondage of rāga (attachment), kāma (desire), krodha (wrath), etcetera (rāgādi akaluṣo asmi).

SWAMIJI: Yes, it is for Yogācāras. Another school of thought explains that the reality of the Self is just to become deprived or away from all substance. When you are an absolute void, [when] you become an absolute void, you are free. Absolute voidness is freedom.

JOHN: Which school is this?

SWAMIJI: Mādhyamikā. And another school explains that the reality of the Self is when the Self becomes absolutely away from kartṛ bhāva (action).

JOHN: This would be Sāṁkhya?

SWAMIJI: Patañjali yoga also.82 So this way (itthaṁ), samāsavyāsābhyāṁ jñānaṁ, this knowledge, this perception, relieves them from that bondage of their own, collectively83 or separately.84 Some become aware and that jñāna (knowledge) removes the bondage of those people collectively, . . .

SCHOLAR: Up to that point.

SWAMIJI: Up to that point.85

SCHOLAR: What does that mean?

SCHOLAR: But none of these three are freed completely.

SWAMIJI: They are not freed completely.

SCHOLAR: So, how can he say “samāsa” in that sense?

SWAMIJI: From their point of view, [it is] samāsa [totality].

JOHN: And, at the same time, is it possible to be liberated from, say, māyīyamala and not from kārmamala?

SWAMIJI: Successive, yes, these two malas. Āṇavamala is the most subtle mala.

SCHOLAR: Just from that.

SCHOLAR: That would be vyāsa.

So, next, the thirty-fifth śloka:

The perception of that worthy-[to-be]-known object, Śiva (jñeyasatattvasya), that perception, when it is sarvātmanā ujjhitam avaccheda, when it is absolutely away, absolutely away from all bondages, that kind of perception is nowhere [non]-perception [of the undifferentiated Self], nowhere ignorance, and it gives you the real liberation (satya muktidam), and that is the Shaivite liberation.

77 The masters of other schools who have an incomplete knowledge and understanding of what liberation is.

79 Literally, “yoga practice,” Yogācāra is one of the two principal schools of Mahāyana Buddhism that prescribes the overcoming of kleśas (afflictions) as the means towards liberation.

80 Literally, “intermediate,” Mādhyamikā is the second principal school of Mahāyana Buddhism, which was founded by Nāgārjuna.

81 The third among the six classical systems of Indian philosophy, Sāṁkhya literally means “pertaining to numbers.” Founded by Rṣi Kapila, the doctrine of Sāṁkhya posits the existence of 25 tattvas (elements), all of which are incorporated in the 36 tattvas of Kashmir Shaivism. According to this dualistic system, there exists a multiplicity of souls (puruṣas), each of which exist independent of one another and of material nature (prakṛti). Sāṁkhya is the most widely incorporated systems in Indic philosophy. According to Sāṁkhya, knowledge alone is sufficient for the achievement of liberation (mokṣa).

82 The fourth of the six classical systems of Indian philosophy was formulated by Patañjali in his Yoga Sūtras. This system, which is considered to be an atheistic doctrine, wholly incorporates the doctrine of Sāṁkhya and provides systematic and practical guidelines for the achievement of liberation (mokṣa).

85 Up to the point of their particular understanding of liberation.

86 In general, the Buddhist conception of liberation is the experience of pralayākala* (viz., sūnya or suṣupti), which, according to Kashmir Shaivism, is a condition still mired by āṇavamala and māyīyamala. It is agreed, however, that the cycle of repeated births and deaths ceases at this stage on account of being freed from kārmamala. The pralayākalin, however, will again enter the cycle of saṁsāra after mahāpralaya (the great destruction). For Sāṁkhyā-Yoga and Advaita Vedānta, the highest conception of liberation is the experience of vijñānākala, which is still mired by āṇavamala. As such, these conceptions of liberation are said to be incomplete. According to Kashmir Shaivism, complete liberation is not merely the cessation of repeated births and deaths (saṁsāra), but more significantly, the achievement of absolute freedom (svātantrya śakti), which is achieved only when āṇavamala has been completely destroyed, and this occurs only at the state of Śiva/Śakti. Swamiji tells us: “When āṇavamala is gone, everything is gone, and you have got entry in God consciousness.” Tantrāloka 9.120 (LJA archive). *See Appendix 10 (p394) for a discussion of the seven perceivers and their associated malas (impurities).

89 Aṁśa means a portion, and aṁśāṁśikāya means forming a part of that portion. Here the sense is that māyīyamala and kārmamala are parts of āṇavamala.

Source: The Light on Tantra in Kashmir Shaivism, Abhinavagupta’s Tantraloka, Volume One