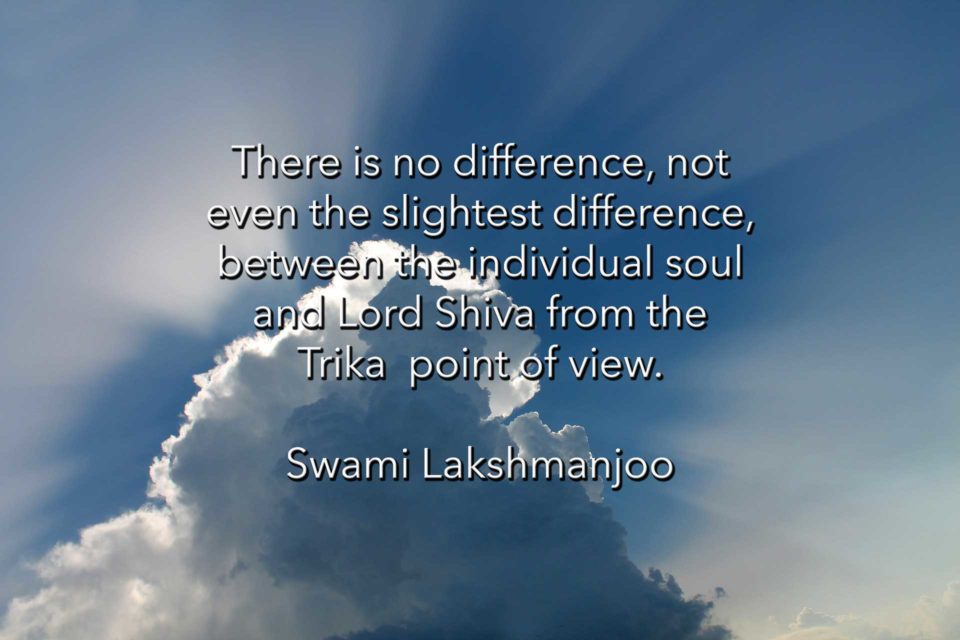 In his revelation of the Vijnana Bhairava: The Manual for Self Realization verse 6 Swami Lakshmanjoo explains the difference between introverted and extroverted paths in Kashmir Shaivism, as well as the significance of sakala [differentiated] and niṣkala [undifferentiated], and aham and ma-ha-a.30

This is a misunderstanding of Pārvatī. She wants to clarify it.

Sakalatve na ca bhavet, if there is sakalata, paratva won’t be accepted there in sakala. Sakala cannot be niṣkala, and niṣkala cannot be sakala.29 This is the misunderstanding of Pārvatī.

But, in fact, sakala can be niṣkala,** and niṣkala can be sakala, because of our theory of that pathway of traveling when we reach that aham and ma-ha-a.30

*Sakala literally means, consisting of parts, divisible, material. “Sakala is where there is some sensation–it may be in form, it may be in space, it may be in time. Only these three things exist: space, time, and form.”

** niṣkala means without any thought

29. Parapara and apara reside in sakala rupa, while para will reside in niskala.

30. Swamiji further explained: “This twofold process [of aham and ma-ha-a] is meant by Lord Shiva to equalize inside and outside, equalize lowest and topmost. [Then] this will be adjusted to krama mudra. [However,] krama mudra is automatic. It is not to be done; it appears. You are not doing. It is not your choice. It is not anybody’s choice. It appears like that. It happens. Krama mudra is the real point [and] for this is this twofold way of aham and ma-ha-a. The pathway is through sauh and pindanatha.”

In his commentary on the Paratrishika Vivarana, Swamiji explains: “It may be in aham bhava [state] or in ma-ha-a bhava–that is one and the same thing from the Shaiva point of view. When you digest this whole, along with Shiva, in the individual, that is aham bhava (we are situated in aham bhava at present). And when it [the individual] is digested in the supreme nature of God consciousness, that is ma-ha-a bhava. Ma-ha-a is the introverted course, and [aham] is the extroverted course; [it is] one and the same thing. You may be individual, no worry; you may be universal, no worry. There is no difference, not even the slightest difference, between the individual soul and Lord Shiva from the Trika point of view.”–Paratrishika Vivarana, introductory verse 3, translation and commentary by Swami Lakshmanjoo, original audio recording, Universal Shaiva Fellowship archives.

Source: Vijnana Bhairava: The Manual for Self Realization
by Swami Lakshmanjoo