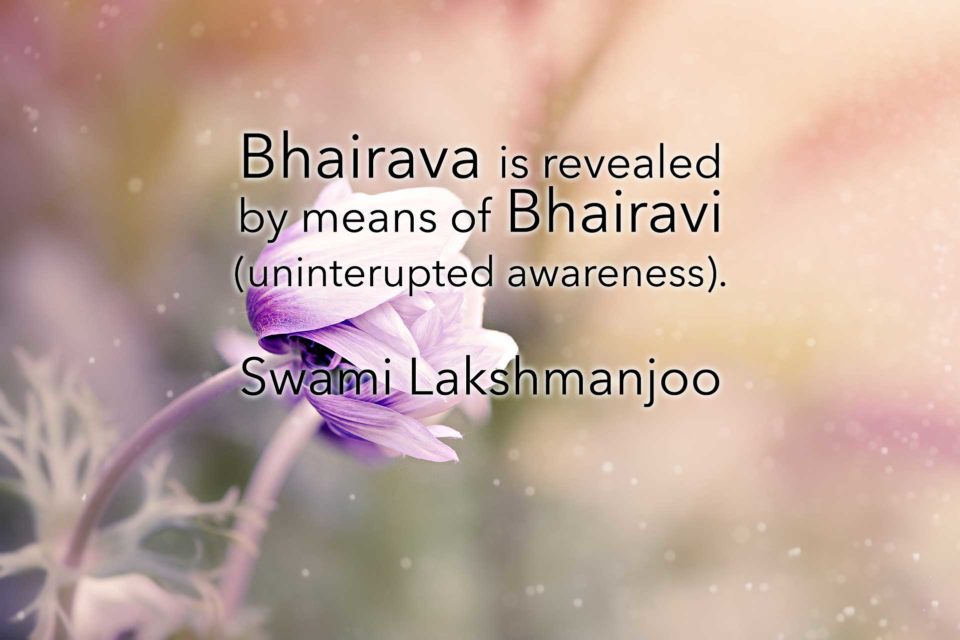 Antar bahir, internally or outwardly (vāpi means “or”), internally or outwardly, marutaḥ, this energy of breath, when [it] is followed by two voids by returning back to two ethers, viyat yugma ānuvartanāt, by maintaining the uninterrupted awareness there–[that] means “bhairavyā”, by means of Bhairavī (Bhairavī means, uninterrupted awareness)–when You maintain uninterrupted awareness in these two voids (internally and externally; there is an internal void and an external void), ithaṁ, by this way of treading on this process (ithaṁ, by this way), bhairavasya vapuḥ vyajyate, the formation of the svarūpa [nature] of Bhairava is revealed (vyajyate).

O Bhairavī, O Pārvatī, here, You have not to recite ‘so’72 or ‘haṁ’. It is without the recitation of ‘sa’ and ‘ha’. It is only awareness that functions here.

It is why this is śāktopāya. This can’t be āṇavopāya because you have to maintain awareness only, no recitation of mantra. Only you have to [inhale] and [exhale] breath and see where are these two voids.73

DEVOTEE: Between going out and coming in?

SWAMIJI: Between going out and coming in. Here74 and in the heart.

JOHN: In āṇavopāya, there is an object.

SWAMIJI: Because [there is an] object [and] there is mantra also.

JOHN: But there is not an object here.

SWAMIJI: There is no object. It is why it is called here śāktopāya.

72 That is, ‘saḥ’. According to the Sanskrit rules of phonological processes that occur at word boundaries (sandhi), visarga (‘aḥ’) followed by a voiced consonant becomes an ‘o’.

73 Swamiji emphasized that these are two “voids”, not two “gaps”.

Source: Vijnana Bhairava: The Manual for Self Realization
by Swami Lakshmanjoo
All Content is subject to Copyright © John Hughes