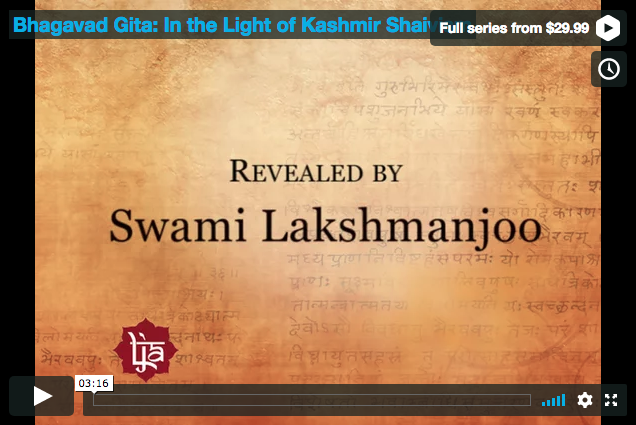 We are happy to announce the Bhagavad Gita, in the Light of Kashmir Shaivism by Swami Lakshmanjoo is now available for video on demand streaming.

These 26 videos of approximately an hour each of the 18 chapters of the Bhagavad Gita are now available to stream (watch online), rent and purchase to watch on your computer or home TV.

The Bhagavad Gita was one of the last works that Swami Lakshmanjoo, the distinguished philosopher/saint of the non-dual tradition of Kashmir Shaivism, completed before leaving this world. It was recorded by John and Denise Hughes when they met with Swamiji in 1990.

When he began his translation Swamiji told John and Denise, it was his new revelation revealing the supreme secrets hidden in the Kashmiri recension of the world-renowned scripture Bhagavad Gita – the Song of God. This revelation was an outpouring of Swami Lakshmanjoo’s direct experience of the state of Universal God Consciousness.

The translation is based on Abhinavagupta’s commentary on the Gita, the Gitarthasamgraha, “The Essence of the Gita”. Here Swamiji reveals the unique and liberating teaching of Kashmir Shaivism which proclaims; “Freedom from all our miseries, as Abhinavagupta boldly declares, can neither be obtained through the renunciation of the world, nor by hatred of this world, but by experiencing the presence of God everywhere.” At last, the secret and profound meaning of the Bhagavad Gita – The Lord’s Song – is being made available for the spiritual illumination of all humankind.