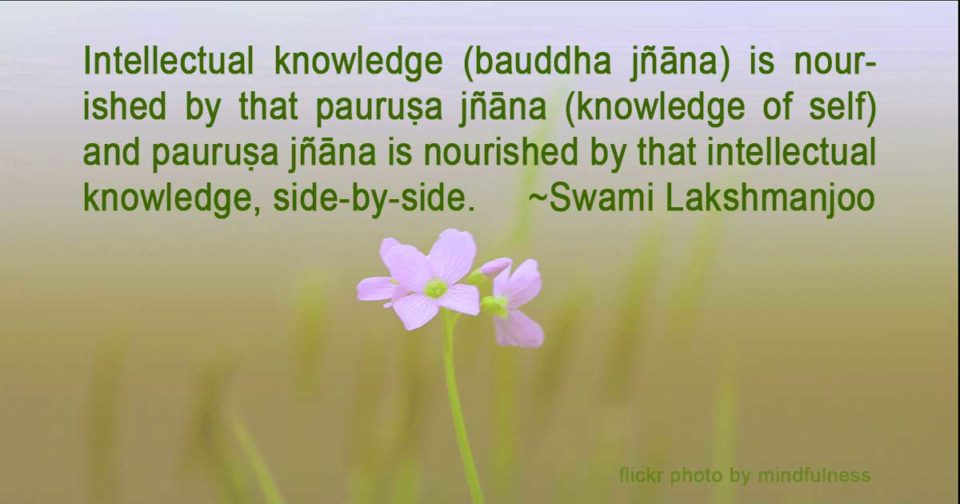 In this section from the Light on the Tantra of Kashmir Shaivism, Abhinavagupta’s Tantraloka, Chapter One Swami Lakshmanjoo is explaining two different types of knowledge that are important in Kashmir Shaivism. 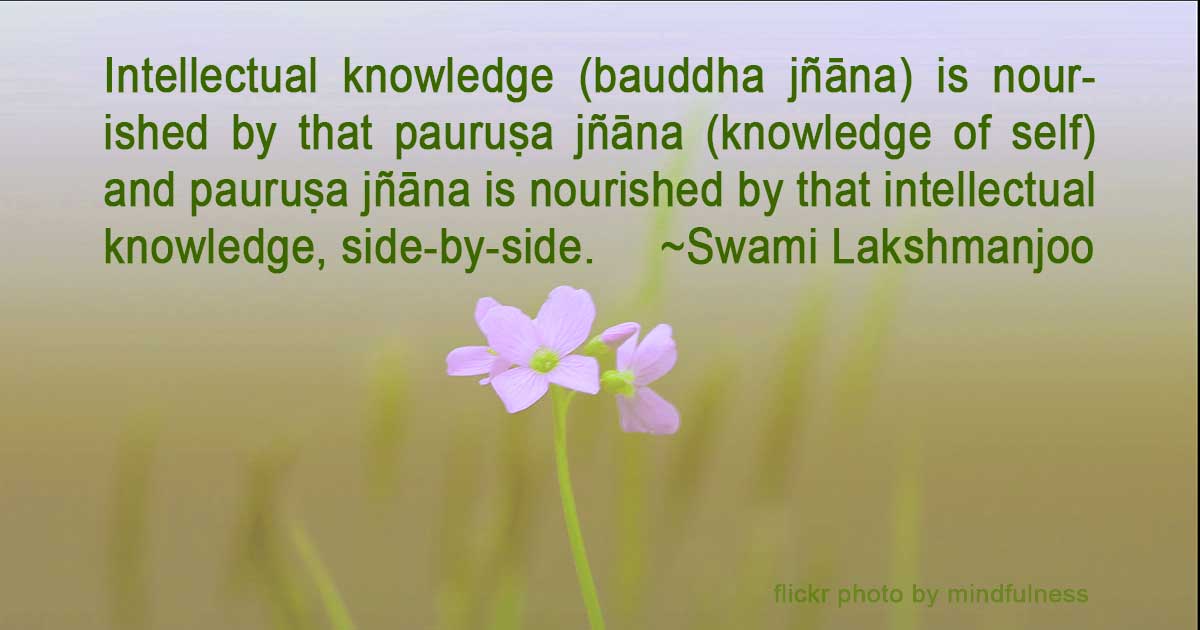 SCHOLAR: As opposed to inherent ignorance and inherent knowledge.99

SWAMIJI: Yes. That intellect which perceives that, “I am perceiving this object, such and such object, this way (aham ittham, idaṁ vedmi),” this kind of intellectual perception, when it comes into existence by the reflection that has come out from puruṣa who is entangled by the six coverings, . . .*

JOHN: Ah, kañcukas.
SWAMIJI: Ṣaṭ kañcuka. Ābila means, he who is covered by these six coverings.100 From that puruṣa, it is reflected. That reflection is penetrated in that intellect and that intellect then perceives that, “I perceive this in this way.”

SCHOLAR: As in the state of great grief, eventually the object of grief appears before you. Is that what he means here?

SCHOLAR: It’s the example [given by Jayaratha].

SCHOLAR: For the limited subject.

SWAMIJI: From the limited subject[’s point of view]. Nirvikalpakam is for the unlimited subject.101 Vikasvara avikalpātma jñānaucityena yāvasā, and, to that puruṣa, who is filled with that real knowledge, that intellect which is existing in that puruṣa according to the existence of his own knowledge of pauruṣa, which is vikasvara and avikalpa (all-round shining and thoughtless; without any impressions, without any differentiated impressions), and that intellect is called bauddha jñāna.

SCHOLAR: The difference being that, in the first case, there is no awareness . . .

SWAMIJI: There is no awareness.

SCHOLAR: . . . and no judgment, but here there is awareness but no judgment.

JOHN: So that other one is śūnya.

[Among] these two perceptions,103 this ignorance of puruṣa is destroyed by being initiated by masters. When you get initiation from your master, then that ignorance concerned with the puruṣa is destroyed. Although it is destroyed there, the fruit of that destruction is perceived only at the end of the body, not in his lifetime. Although it is there, that knowledge is there, pauruṣa jñāna is there, but the fruit of pauruṣa jñāna [i.e., liberation] is found, is perceived, only at the end of leaving that physical body.

SCHOLAR: So, how can vedha dīkṣā occur and bauddha jñāna not appear?

SWAMIJI: Vedha dīkṣā. Bauddha jñāna will appear only by knowledge, by book knowledge.

JOHN: Does he explain later why it is the case that you don’t attain mokṣa [while embodied] if you don’t have bauddha jñāna? What it is . . .

SWAMIJI: Yes, he will explain it. Now, the forty-fourth śloka:

SCHOLAR: It is still avikalpitam.

SWAMIJI: It is still avikalpitam.107

SCHOLAR: For him at that level, too. It108 doesn’t affect the awareness of the mind.109

SCHOLAR: So this bauddha vijñāna is not as Jayaratha takes it: the bauddha jñāna which is necessary in the master in order to be able to initiate the disciple.

SCHOLAR: But surely if intellectual knowledge (bauddha jñāna) is required for . . .

SWAMIJI: For the disciple.

[In the following verse, Abhinavagupta says], “This two-fold knowledge and two-fold ignorance is not my own invention”:

SWAMIJI: Yes, commentators. [Abhinavagupta says], “So this is not new. So this is not my invention regarding this knowledge and ignorance.”

SCHOLAR: But dīkṣā is a necessary prerequisite for that.

SWAMIJI: Yes, previously you must have dīkṣā (initiation). Only bauddha jñāna won’t liberate you.

SCHOLAR: So, it is really bauddhājñāna (intellectual ignorance).

JOHN: So, they grow together then?

SWAMIJI: They grow together. It is already explained previously.

JOHN: So then, the whole function of Śaiva sādhanā (practice) is, on the one hand, practice and devotion to the master, and on the other hand, this . . .

110 Although that is not what is meant in this instance, Swamiji tells us: “The master must be established in God consciousness which has come in his experience by getting entry in svātantrya; svātantrya, which makes him one with Lord Śiva. Sa eva hi guruḥ kārya, that guru you must find out for getting initiation in these rituals. Tato asau dīkṣaṇe kṣamaḥ, he is the perfect master to handle these rituals, no other master. That master who is only authorized in rituals without [personally] getting entry in God consciousness is not fit to become a master. He knows rituals but he has not āveśa, he has not experienced the entry of God consciousness, so he is not a fit master for this.” Tantrāloka 15.38 (LJA archive).

113 That is, in order for an initiation to produce the desired result: embodied liberation.

115 Advaita śāstra (non-dual scripture) refers to the Bhairava śāstras, the monistic scriptures of Kashmir Shaivism, which are the substance of the Tantrāloka.

(source: Light on the Tantra of Kashmir Shaivism, Abhinavagupta’s Tantraloka, Chapter One, revealed by Swami Lakshmanjoo

All Content is subject to Copyright © John Hughes.
[/column]