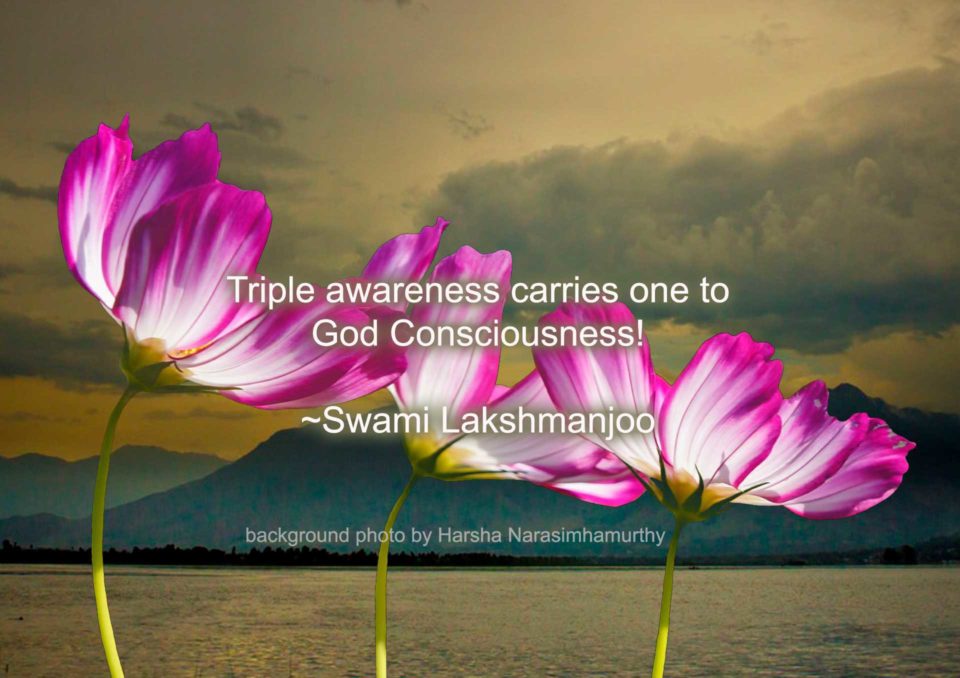 In this excerpt from the Shiva Sutras: The Supreme Awakening Swami Lakshmanjoo explains how a “yogī whose God consciousness is destroyed by the state of illusion becomes dependent on his action.” Swamiji then reveals how to overcome this with “Triple awareness.” 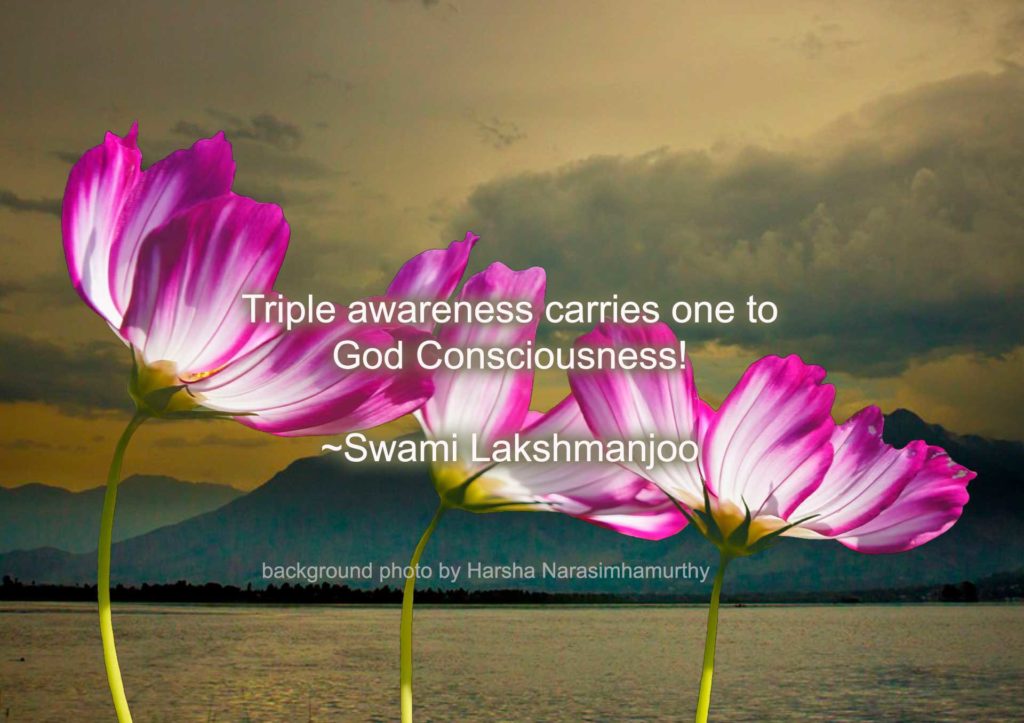 The yogī whose God consciousness is destroyed by this state of illusion
is dependent on his action.

On the contrary, the yogī whose God consciousness is destroyed by this state of illusion is dependent on his action. The past, present and future actions (karmas) of this yogī, whose God consciousness has been destroyed by the illusion of duality, will control him and make him their plaything. He is just an ordinary human being. He is not capable as a yogī. Having his state of being destroyed by this illusion of duality, he thinks, “This is pain and it is not good. This is pleasure and it is better than pain. I have a good job which is very nice. I have been fired and I am very sad!” This is the state of individual being.

The Sanskrit word moha means ignorance (ajñāna). The words prati saṁhataḥ mean “who is constricted by this ignorance, this illusion” (moha). He is not the player of pain and pleasure as a yogī is. Being shrunk by illusion, he is pain and pleasure’s plaything. He is said to be the embodiment of action (karmātmā) and as such, he is dependent upon action. Actions will control him. He is always stained (kalaṅkita) by good and bad actions.

When this yogī does not maintain the awareness of God consciousness, having his God consciousness covered by ignorance, then because of his differentiated perception of the world, he does not experience the thirty-six elementary states of the universe, beginning with the element Śiva and ending with the element earth, in a supreme or universal manner. Only the states of good and bad appear to him, which are unfortunate and which, when experienced, cause supreme pain to shine within him. Because of this, he has become an absolutely unfortunate being. (Kālikākrama Śāstra)

So, although such a yogī has become dependent on his past actions, as ignorant persons are, when, by the means of the absolutely independent grace of Lord Śiva, his state of perfect independence again shines, then…

He drives away the field of differentiated perceptions and enters into a new world of God consciousness.

In this verse we are told, “He drives away the field of differentiated perception.” This means the differentiated perceptions of that subjective being are kept apart from his self. This subjective being is that individual who is residing in the sakala and pralayākala states because he has defined his ego in relation to the body (śarīra), the vital breath (prāṇa), the self of the dreaming state (puryaṣṭaka), and the self of deep sleep (śūnya), and not in relation to his own real nature of God consciousness.

Then, ignoring the previous state of degraded individual consciousness, he (sargāntara karmatvaṁ) enters into a new world of God consciousness wherein whatever he thinks, whatever he desires, comes true. This is already illustrated in Svacchanda Tantra:

When you fix your awareness not only in two, but in three, you are carried to God consciousness and you become one with Svacchanda.32 (Svacchanda Tantra)

And so it is explained in this verse in the Svacchanda Tantra, as he becomes one with Svacchanda (with Bhairavanātha), then differentiated perceptions do not exist. In another verse in the same Tantra, we are told:

He becomes so great he terrifies Brahma, Viṣṇu, and Indra, the Siddhas, Daityas, and those who rule the great deities, garuḍa, etc. He causes them to be fearful, or if he is satisfied with them, drives fear away from them. He is the bestower of boons and curses. Even the Lord of Death cannot stand before him. By the power of his will, he can level great mountains. (Svacchanda Tantra 6.54–55)

This is not difficult for him to attain, because:

The power of creation is the experience of every individual.

It is the experience of each and every individual being that while they are in the dreaming state or using their imagination, they have the power to create and destroy as they will (karaṇaśakti). When you are intoxicated with alcohol, you can think that you are the Lord and that no power can weaken you. That is your conception in that state. Or, when you enter the dreaming state, you can create a motorcar to drive, the road to drive on and the fields and vegetation to drive through. In this dream, the road is created by you, the motorcar is created by you, the trees on the sides of the road are created by you, and it is you who are seated in the car and you are you. Everything in this dream is you. If somebody comes in front of you and stops your car, that is also you. In this dream, you create the entire universe yourself because in dreams no one else is created except your own glory. So in this way, the power of creation is experienced by every individual, and in the same way, the power of creation of this yogī is universal.

In this respect, it is said in the Pratibhijñā Kārikā:

So according to the thoughts he chooses, every individual being has the power of knowing and acting. (Īśvarapratyabhijñā Kārikā 1.6.11)

So, when it is proven that the power (karaṇa śakti) to create and destroy already exists, then when he desires with an intense force of awareness, that desire will come true not only in the dreaming state or world of imagination, but also in the waking state. He can also create worlds of his own in the waking state. In fact, he can create whatever he desires in the outside world and these worlds which he has created can also be perceived by others.

It is also said in Tattvagarbha:

When those individuals, who are masters of the dreaming state and the world of imagination, discard the absence of the establishment of awareness and secure and strengthen the power of their awareness, then their desire becomes just like the heavenly wish-fulfilling tree (kalpataru).33

32. Svacchanda is that Bhairava who is absolutely filled with free will. etc. He causes them to be fearful, or if he is satisfied with them, drives fear away from them. He is the bestower of boons and curses. Even the Lord of Death cannot stand before him. By the power of his will, he can level great mountains. (Svacchanda Tantra 6.54–55)

33. The kalpataru tree is one of the five trees of heaven, fabled to fulfill all desires.

Source: From the third awakening of the
Shiva Sutras, The Supreme Awakening, by Swami Lakshmanjoo)
All Content is subject to Copyright © John Hughes.