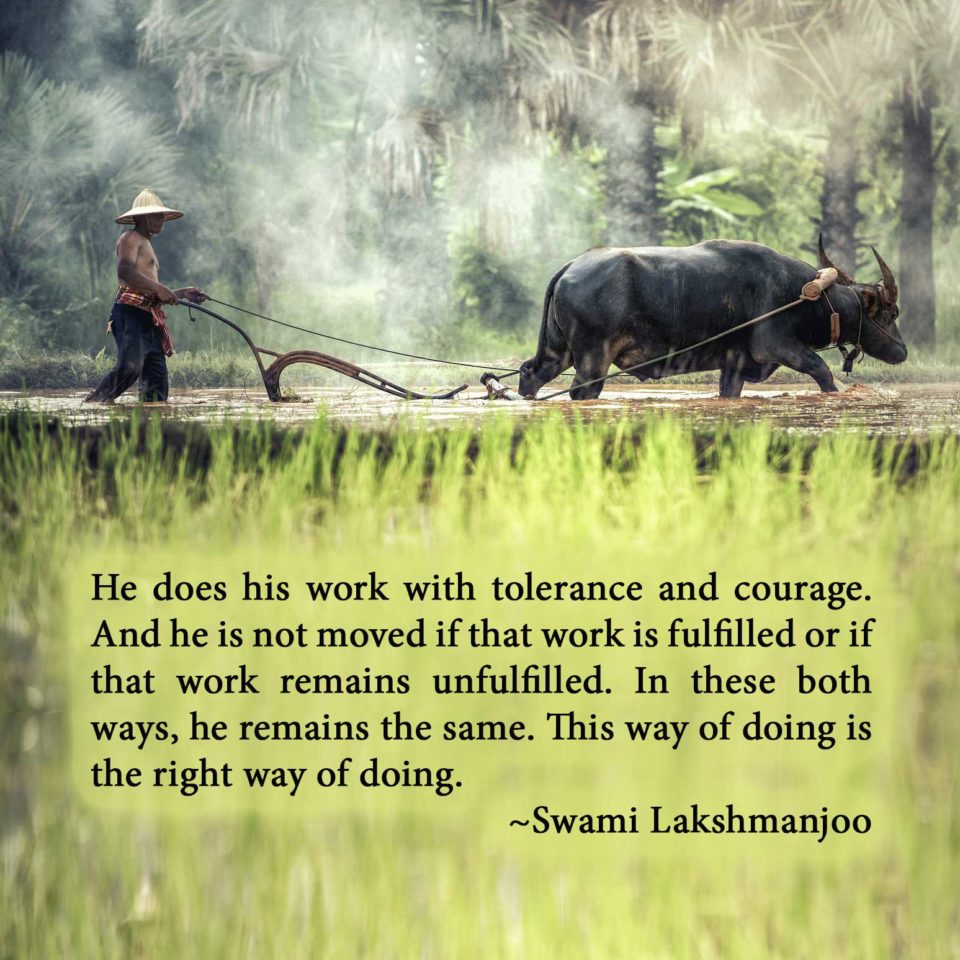 Whatever the śāstras have [prescribed] . . . This is the 23rd śloka?

SWAMIJI: Whatever the śāstras have ordered us [how] to behave, you should do that action, saṅgarahitam, without being attached to that action. Arāgadveṣataḥ kṛtam, and rāga and dveṣa, attachment and hatred, you should discard while doing this action. Aphalaprepsunā, and you should not behave [i.e., seek] how to get fruits out of it. You should not think of fruits, any [fruits from] this action. That action is sāttvic action. Yattu kāmepsunā karma . . . now rājas action.

Yattu kāmepsunā, that action which is done with desires, various desires and thoughts and ambitions, sāhaṁ kāreṇa, and putting I-ness in that that, “I am doing this job for such and such profit,” kriyate kleśa bahulaṁ, and he puts all [kinds] of effort in that [desire for achieving] success [in] doing that computer’s work . . .   How much you tried your best to do it, but it was, in the long run, it was for realizing the truth of God, so it was divine507. Otherwise, if it would have been for satisfying [your] nature with songs and dancing, then it would have been rājas [action].

JONATHAN: But Swamiji, can I ask one question here? If you do some work, sometime, but you have the desire to get money to be able to live . . .

JONATHAN: Sometimes if you do work, you have some desire to get a reward for that. Because you are doing some employment because you need money to live.

SWAMIJI: Yes. That is fine.

JONATHAN: That could be sāttvic?

JONATHAN: Or to look after your family, that’s okay?

JONATHAN: The desire is there to make your family comfortable.

SWAMIJI: Then that is dharma, yes. That is your duty. [But] not collecting more money for nothing, to just . . . just to keep in the World Bank. What for?

JONATHAN: Because you said, “to possess more than you need in this lifetime is a sin.”

[Anubandhaṁ], what will be the fruit of this action? Kṣayaṁ, [will] anybody get harmed by this action? Hiṁsām anavekṣya, and [will] anybody get slaughtered by this action? And [anavekṣya ca pauruṣam], are you capable of doing this [action]? While asking [him these questions], he [replies], “I am capable of doing this!” And he thrusts–without understanding–he thrusts into that job.508 Yattat tāmasam ucyate, to indulge in that job [in this manner] is tāmas. This was the 25th śloka. [Video missing!] From the 26th śloka, there is [explanation of] kartā, which means the doer: sāttvic doer, [Video back] rājas doer, and tāmas doer.

Muktasaṅga, who is not attached to whatever action he does, he is not attached to it. Anahaṁ vādī, and he does not believe that, “I have done this” [or] “I am doing this.” Dhṛti utsāha samanvitaḥ, he has got courage, he has got tolerance and courage. He does his work with tolerance and courage. And he is not moved if that work is fulfilled or if that work remains unfulfilled. In these both ways, he remains the same. And this way of doer is called sāttvic doer. And he is on the right path; this way of doing is the right way of doing. 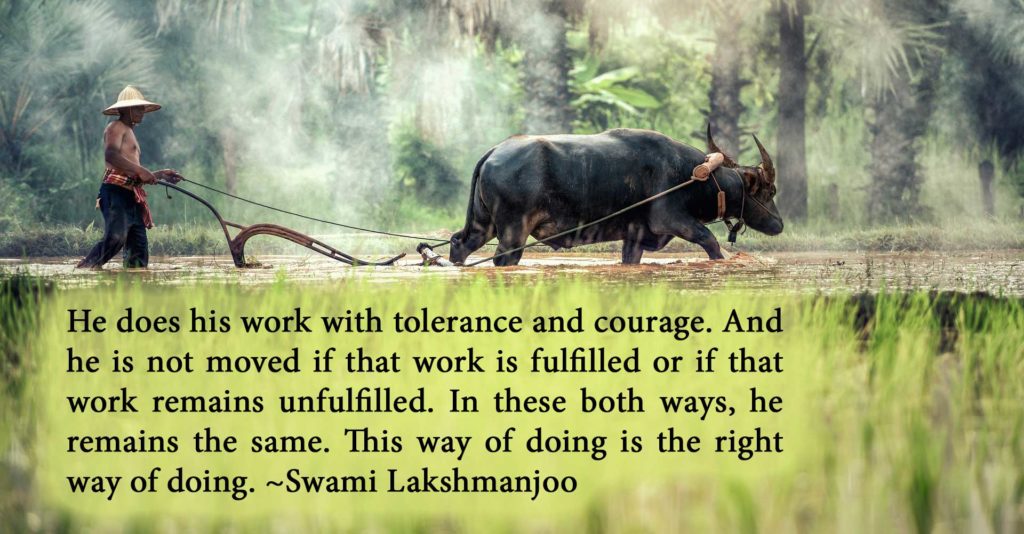 [The rājas doer is] rāgī, who has got attachment for that work; karma phala-prepsur, who always craves and longs for its fruit; lubdho, he has too much greed; hiṁsātmaka, he does not mind if somebody is harmed by [his] doing. [He feels], “let him be harmed. I must get its fruit.” Aśuciḥ, and his behavior is dirty [i.e., impure]; harṣaśokānvitaḥ, he is always with harṣa means happiness and śoka is grief; happiness and grief are absolutely at his disposal. If he has done . . . if he is successful in his doing [something], he is happy; if he is not successful, he is filled with grief. This way of doer is called rājas doer and it has no value. Now the doer of action in tāmasa state.

Ayuktaḥ, who does not know how to do this action [and] who is not truly doing actions with good behavior. Prākṛtaḥ, he does not listen to anybody’s suggestion that, “this way you should do it.” [He replies], “no, no, no, I don’t like your suggestion, I know how to do it.” That is prākṛtaḥ, he depends upon his own [limited] understanding. Stabdhaḥ (stabdhaḥ means he is unmoved by others suggestions). Śaṭha, he is śaṭha (śaṭha means he is internally rigid509). Naikṛtika (naikṛtika [means] he has no compassion for others510). Alasaḥ (alasaḥ means he is always sluggish). Viṣādī, he is always repenting [afterwards], “I have done it wrongly.” Dīrgha sūtraśca, and his [activity] takes more [time] than anything in this world, more time. [If] he can do that work of half an hour, it will take him at least fifteen days to complete it. This way of doer is called tāmas doer.

Source: Bhagavad Gita, In the Light of Kashmir Shaivism, by Swami Lakshmanjoo
All Content is subject to Copyright © John Hughes