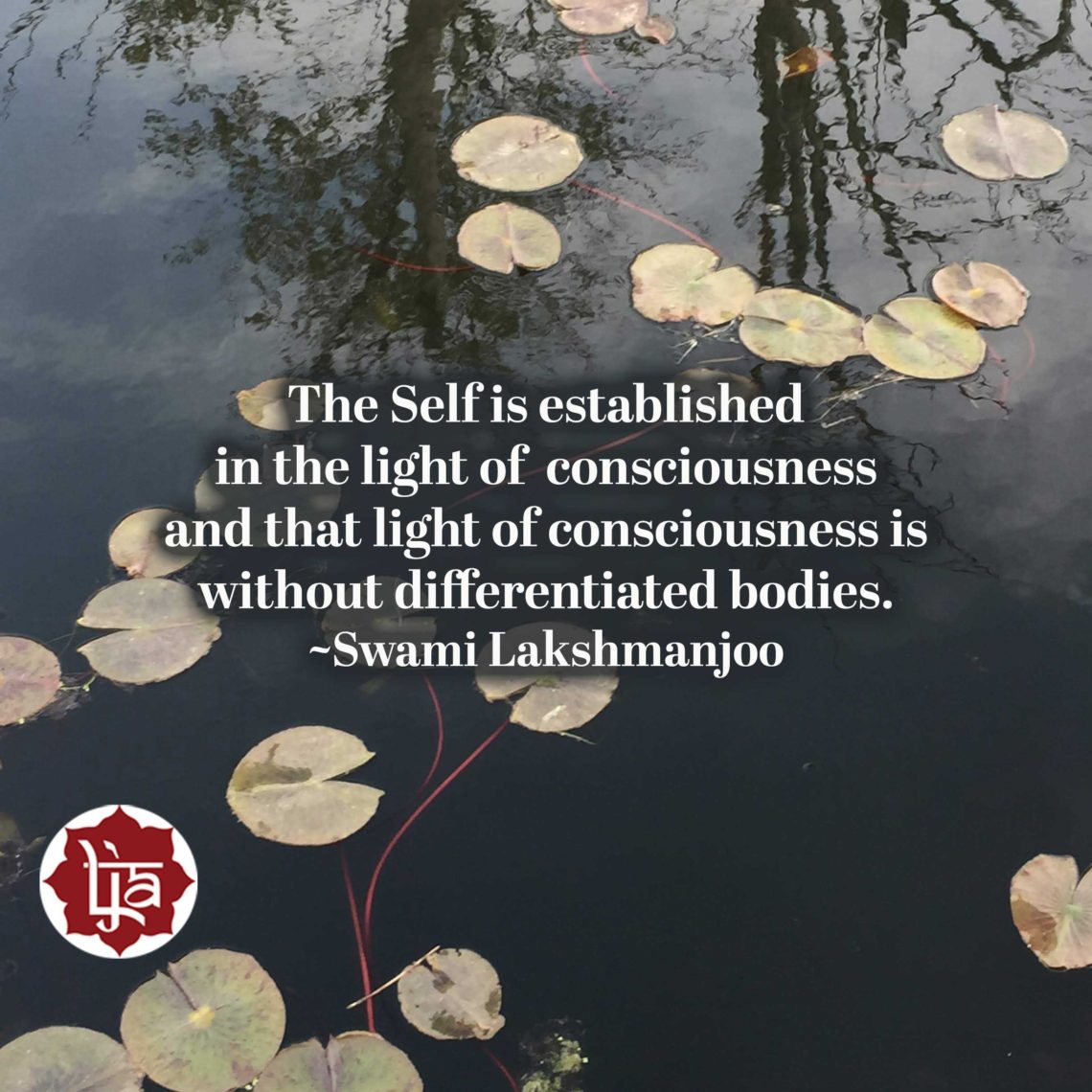 This is part three of our series about ‘glamour of Lord Shiva’ in Kashmir Shaivism. We will learn how this relates to where the real Self is established in the following excerpts from Abhinavagupta’s Paramarthasara, The Essence of the Highest Reality, followed by audio excerpts from the Svacchanda Tantra (Shiva Sutras) and Abhinavagupta’s Tantraloka. Each time Swami Lakshmanjoo gives us a clearer and clearer description of the glamour of Lord Śiva.

You can find part one here and part two here.

From Abhinavagupta’s Paramarthasara, The Essence of the Highest Reality…

Source: Abhinavagupta’s Paramarthasara,
The Essence of the Highest Reality, by Swami Lakshmanjoo.
Now also available as video on demand.

From the Shiva Sutras: The Supreme Awakening…

When fire has risen from wood, from fuel, nirmala, and it has become absolutely pure, atīva bhāsara, and is with full glamour shining with flames, na bhūyaḥ praviśet kāṣṭhe, it does not get entry again in firewood, it does not enter in fire wood again. Once it has come out from firewood it won’t get entry in that again.

In the same way, adhvana uddhṛtaḥ ātmā, from the differentiated perception of the universe, when the ātmā has come out he does not get entry again in that differentiated universe.

Having destroyed the impurities (mala) ānavamala, māyīyamala and kārmamala, and become absolutely pure (nirmala), then, even though he lives in the world of impurity (mala), he does not become attached to it. (Svacchanda Tantra 10.372)

From the Light on Tantra in Kashmir Shaivism, Abhinavagupta’s Tantraloka…

SWAMIJI: Maha, teja, yes, teja. Ātma jyotiḥ svabhāva prakaṭana vidhinā tasya mokṣaḥ, and it is not only that He is bound, He again becomes liberated by revealing the nature of His Self-consciousness, His own consciousness. When He reveals His own consciousness again, by that way, He again becomes liberated and becomes mukta. And this liberation and being bound is the play of that Being who is citrakāra, who has consumed various formations of His Self. Sometimes He seems to be bound, sometimes He seems to be liberated.

SWAMIJI: Citrakāra, “he has many.” This is the artha, this is the essence, of the Tantrāloka, that this is only a play.

SWAMIJI: Being bound and being liberated. Otherwise, there is nothing to be done.

JOHN: That is why you have this secret word “rām.”

This incorrect knowledge, when you know your Self not in the correct way, that is mithyā jñāna. In the differentiated state, when that knowledge is timiram, . . .*

SWAMIJI: Yes, illusory and not correct.

*. . . that is really the blindness or the darkness of the Self. By that blindness, you can’t perceive your nature–by this mithyā jñāna. And that blindness creates (prasūte, creates) asamāna dṛṣṭi doṣān, many drawbacks, . . .*

SWAMIJI: Asamān: unparalleled, great, huge. Tat sad-bhāvāt, and by the existence of that false perception, vimalamapi tad mālinyadhāma bhāti, although that state of God consciousness is absolutely pure, but It seems to be impure, It appears to be impure. And when, yattu prekṣyaṁ dṛśi parigataṁ taimirīṁ doṣamudrā dūraṁ rūnddhet, when (yattu-yadā; yattu means, yadā), when prekṣyaṁ dṛśi parigatam, prekṣyam, that [which] is to be perceived and [which] is not existing in your own eyes, in your own sight, in your own knowledge(dṛśi parigatam), and because in your sight there is taimirīṁ doṣa mudāraṁ (there is the defect of blindness, blindness of perception), when that blindness of perception is put away, is removed away, prabhavatu katham tatra mālinyaśaṅkā, then there is no question of the rise of impurity in your Self. Your Self shines in glamour.