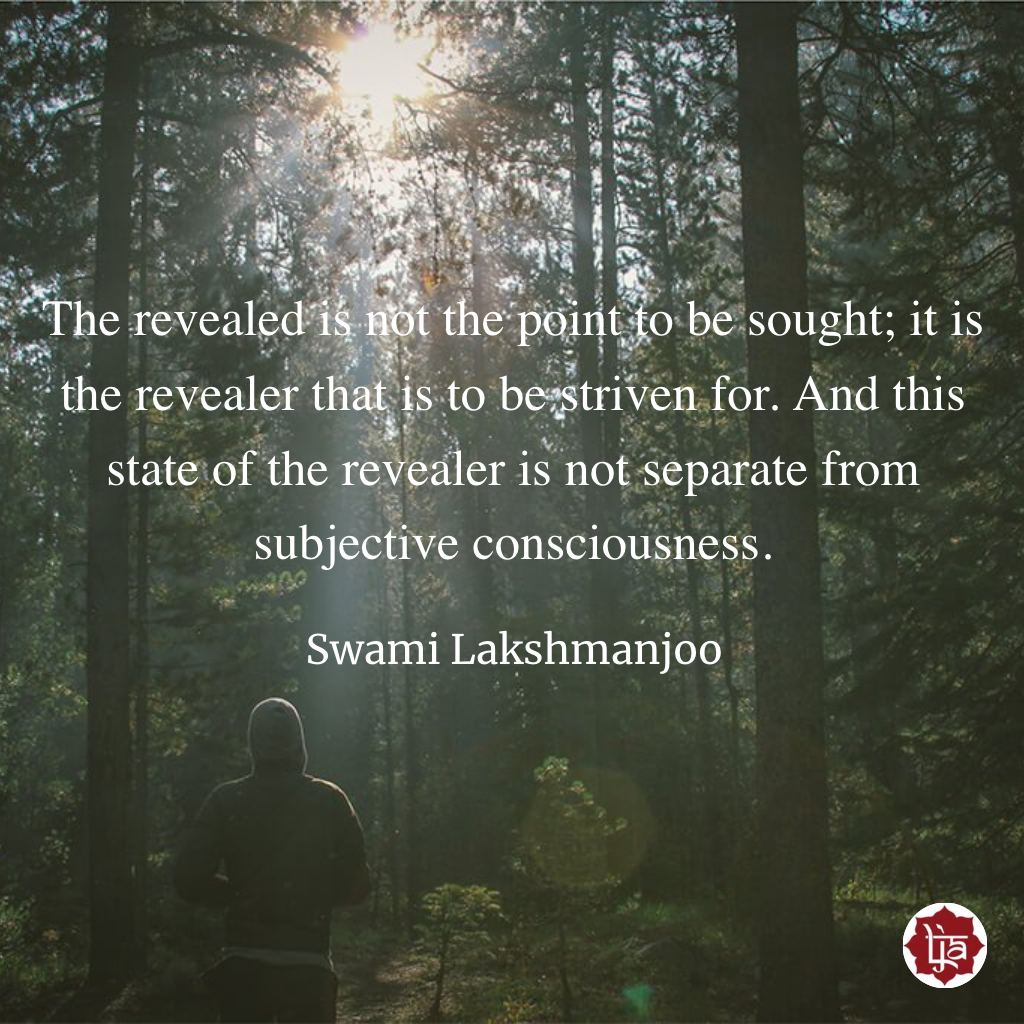 The Shiva Sutras are divided into three parts. According to Kshemaraja, the three parts correspond to the three means (upayas) for the attainment of liberation (moksha), as revealed by Kashmir Shaivism. The three upayas for traveling from individual limited consciousness to universal God consciousness are shambhavopaya, shaktopaya and anavopaya.

Abhinavagupta, drawing from the Malinivijaya Tantra, defines shambavopaya as the upaya wherein the aspirant achieves entry (samavesha) into supreme consciousness just by the grace of his master, without adopting any process. He does not use thought (dhyana), mantra, or any other aid to meditation.

Shaktopaya is defined as the upaya where the aspirant achieves mystical entry (samavesha) through contemplation of the mental object that cannot be spoken or recited.

Anavopaya is defined as the upaya where mystical entry takes place through concentration on parts of the body (sthanaprakalpana), contemplation (dhyana), recitation (varna), taking the support of the breath (uccara), and mantras.

The means of traveling from limited consciousness to universal consciousness depends on the ability of the aspirant. Abhinavagupta tells us in the Tantraloka that the aspirant should always try for the highest and best thing first. Failing that, he should try for the next best, and so on. Thus, in his Tantraloka, he has defined and elaborated the highest upaya, Shambavopaya, first. His descriptions of shaktopaya and anavopaya follow.

This is an excerpt from the Shiva Sutras: The Supreme Awakening, revealed by Swami Lakshmajoo, third awakening 3.16. [This is not a word-by-word transcript]. 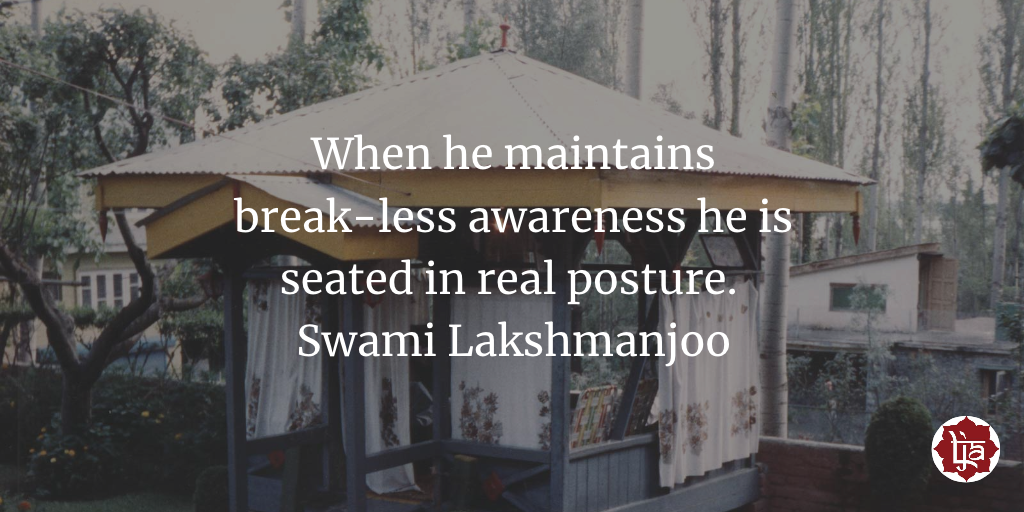 Then, when such a yogī acts in this way:

Seated in that real posture, he effortlessly dives in the ocean of nectar.

Actually, the postures (āsanas) explained in the yogadarśana are not really āsanas at all. Śivayoga is the only posture that must be understood when you are seeking to understand the real posture for such a yogī. This real posture is the supreme energy of awareness. You are seated in that posture when you hold and possess the supreme energy of awareness. Then in each and every act of your life, you are aware, you are seated in that posture. This is the real āsana. The physical postures called āsanas are not actually āsanas. These so-called āsanas are only imitations of the real āsana. They are only imagination. The real āsana actually exists when you are truly residing in the state of absolute awareness, the awareness of self.

The yogī who, leaving aside the effort of āsana (yogic exercises), prāṇāyāma (breathing exercises), dhyāna (contemplation), and dhāraṇā (meditation), simply remains in that posture with nothing left to do, aware of what he actually is. This is why the author has used the word sukham in the sūtra; because “effortlessly” means that, without exerting any effort in respect to breathing or yogic exercise, contemplation or meditation, he remains seated in that posture.

So in an internal, not external, way he perceives the reality of his embodiment of awareness18 and without any effort finally immerses himself in the ocean from which the universe rises and expands. He dives and enters for good in that ocean, which is filled with real nectar.

What does diving mean? In diving into the ocean of nectar, he lets the impressions of the body (deha), of the breath (prāṇa), of the eight constituents (puryaṣṭaka) and of the void (śūnya) sink into that ocean and he becomes one with that nectar. This is the real way of diving.

In Mṛityujita Tantra (Netra Tantra), it is said:

You do not have to concentrate above on sahasrārdha cakra or below on mūlādhāra cakra. You have not to concentrate on the tip of the nose, on the backside, or on the nostrils—breathing and exercising prāṇa and apāna.

You do not have to concentrate on your organic field, or on the universal elements, or on sensations of the five senses—sound (śabda), touch (sparśa), sight (rūpa), taste (rasa) and smell (gandha).  You have to put all of these aside and enter into that universal being of awareness. This is what Śaivaite yogīs do successfully.

Actually, this state of the Śaivaite yogī is the real state of Śiva. This state is not revealed to others; it is revealed only to the revealers. (Netra Tantra 8.41–45)

This state, which is the real nature of Śiva, is not revealed; this state is the revealer. This state is subjective, not objective. So the aspirant must be active in an interior way, not in an external way. He must be active in being aware of himself. That is real activity. Real activity is not moving about here and there. The revealed is not the point to be sought; it is the revealer that is to be striven for. And this state of the revealer is not separate from subjective consciousness. It is only subjective consciousness. 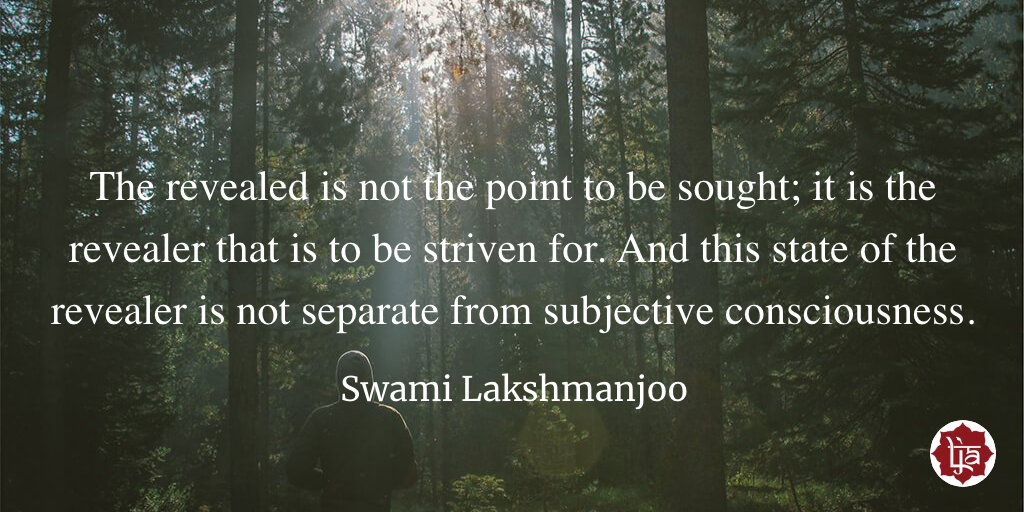