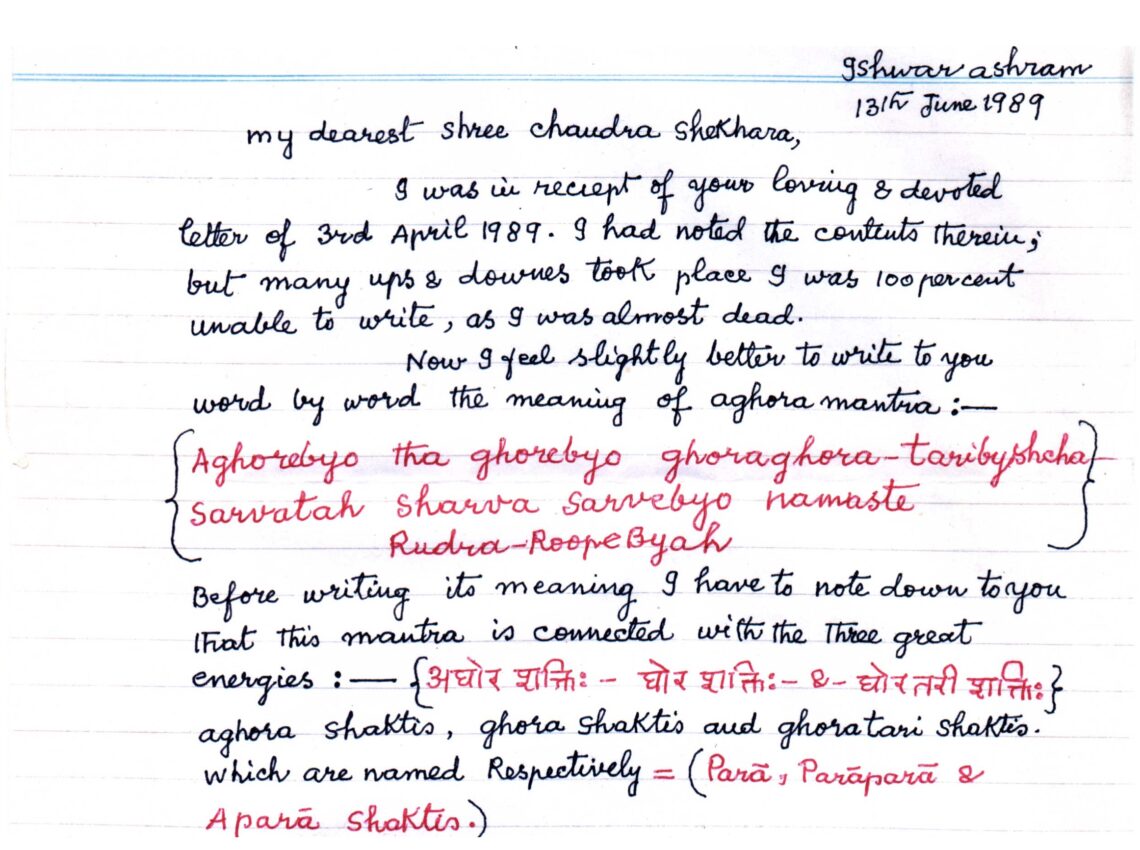 This is a lecture that explains the Aghora Mantra in detail. In the summer of 1989, John Hughes received a letter from Swami Lakshmanjoo writing to him about the Aghora Mantra and its importance, after having the darshan of Svachanda Bhairava. In the following excerpt from the Weekly Sangha, which we broadcasted on the morning of Swamiji’s Mahasamadhi Havan, you will learn more about this mantra and its significance for Kashmir Shaivism and your own practice, and the whole world.

This is the first part in a two-part series. In part two we go deeper into what is the reality of Svachandanatha and why is he so important in Kashmir Shaivism. 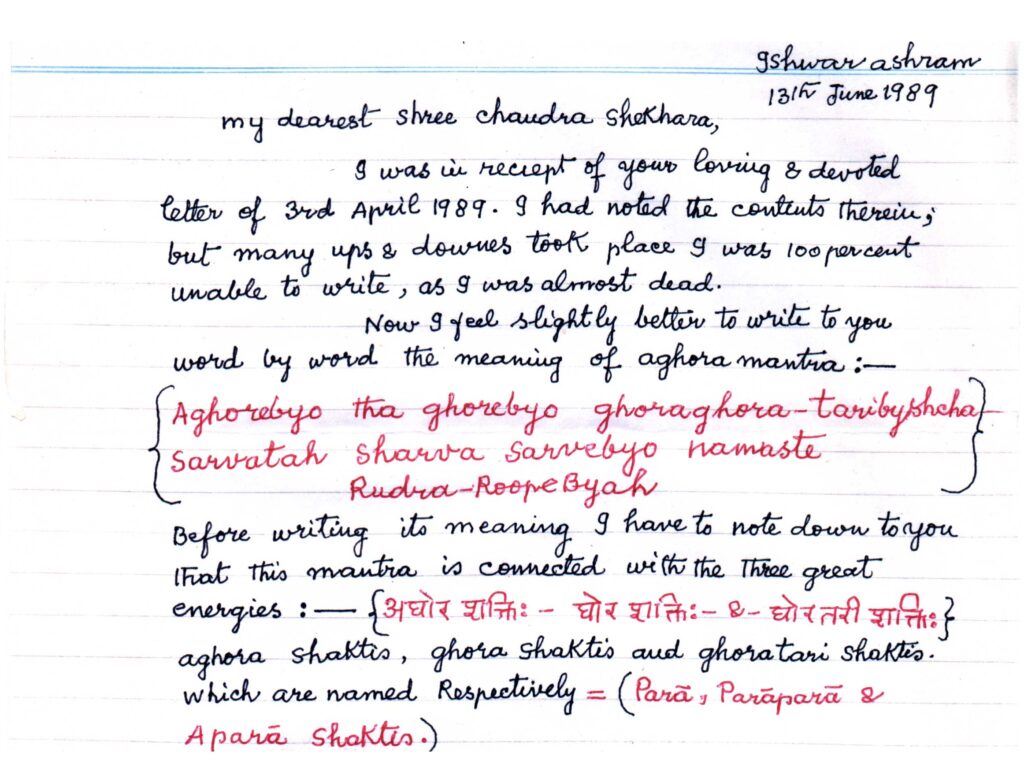 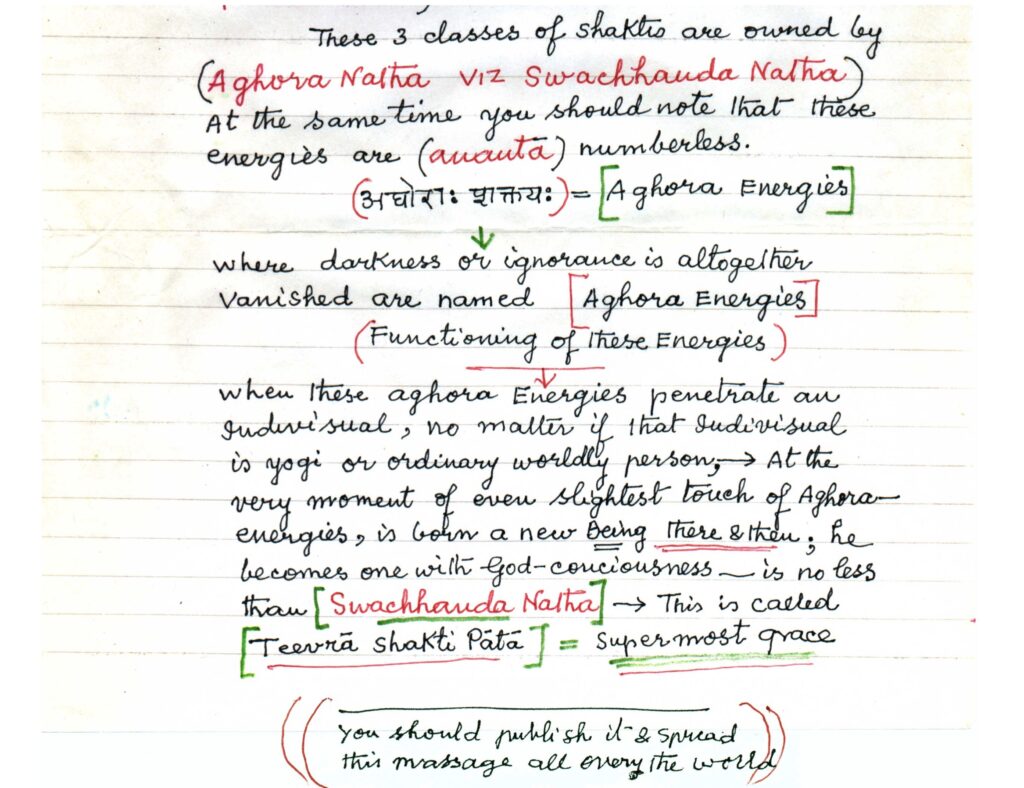 Efficacy of the Aghora mantra

O Lord Shiva! You alone transform yourself into all forms, into the forms of the powers of Rudra as Aghorā, the enlightening and uplifting energy, Ghoratarī, the frightful darkening energy which pushes one down, and Ghorā, the energy which keeps one fixed, neither rising or falling. These forms, embodied in Rudra Shiva, are helpful to the aspirant while he is aware, and frightful for the one who is ignorant, pushing him down and down.

The following extract on the nature of Svacchandanātha, also known as Aghoranātha (the lord of the three Aghora energies) is taken from: “Self Realization in Kashmir Shaivism, the Oral Teachings of Swami Lakshmanjoo,” chapter 4, Talks on Discipline.

When we study the Śaiva Scriptures we must always remember that these scriptures were narrated by Lord Śiva Himself in the form of Svacchandanātha (Aghoranātha).

Svacchandanātha, while creating these Tantras through His five mouths, possessed eighteen arms. These eighteen arms are symbols of the eighteen elements or tattvas. These tattvas are offshoots of His five great śaktis:

These eighteen arms of Lord Śiva, in the form of Svacchandanātha, are created by Lord Śiva for the protection of the individual, but in order to receive this protection the individual must adhere to divine discipline (yamas and niyamas). If you carefully follow what I have said, there is no question that Lord Śiva in the form of Svacchandanātha will protect you with His wonderful eighteen arms and, through His shining Grace, reveal Himself to you.

Īśvara-praṇidhāna is the final and supreme niyama. It means love and devotion to God. The love of Lord Śiva creates devotion. If you love Lord Śiva and are devoted to Him, it is not possible for Him to neglect you. He will reveal Himself to you and purify you with his glorious eighteen arms. He will help you enter into the realm of God Consciousness.

Excerpt from the book

The Birth of the Tantras

These five energies appeared in His five mouths which are known as: Īśāna, Tatpuruṣa, Sadyojāta, Vāmadeva and, Aghora and these five energies got the sensation of illuminating the universe (anugraha). And this grace came out through Lord Śiva’s five acts of: creation, protection, destruction, concealing and revealing, for the purpose of illuminating the whole universe.

Part two will be posted next week… Check back here or sign up and chose “interest”: ‘Email me weekly Excerpts of Swamiji’s teachings’ to receive weekly lectures delivered to your inbox.