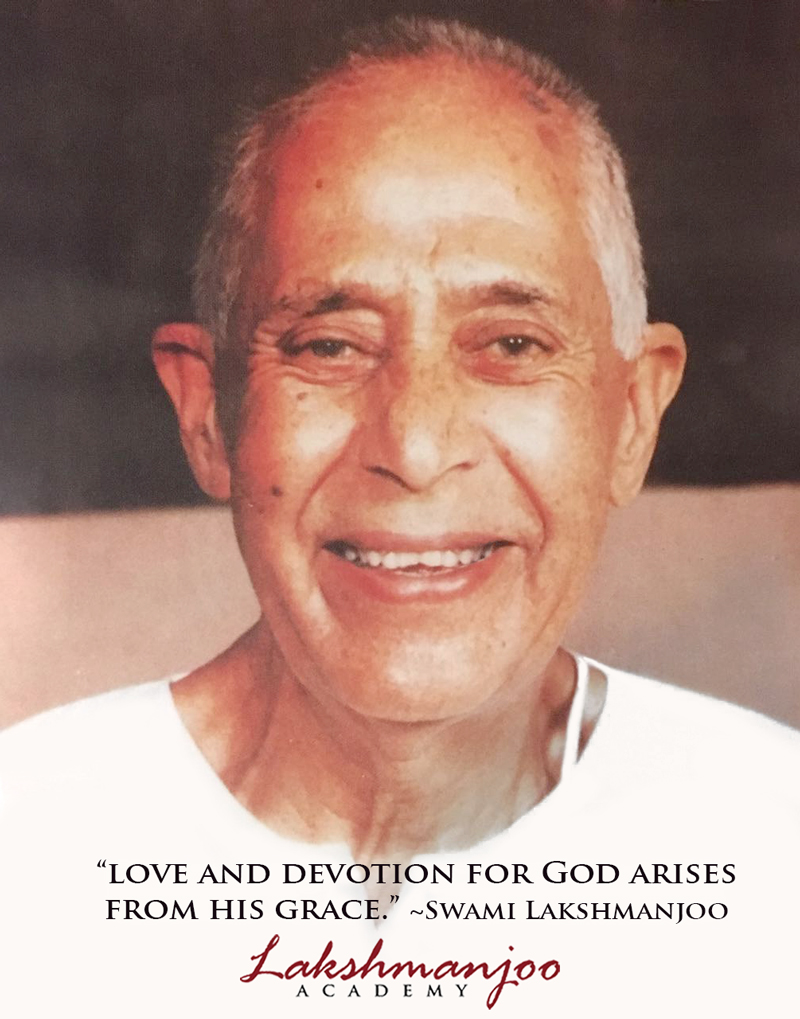 “Love and devotion for God arises from His Grace”.
~Swami Lakshmanjoo

Thank you, with a special excerpt from Abhinavagupta’s Tantraloka (Kashmir Shaivism)

We thank everybody who came to the annual Birthday Ceremony for Swami Lakshmanjoo and made it a memorable event. We all enjoyed the wonderful atmosphere created by the traditional recitation of mantras and chanting, and took preshad (food blessed by the Master) of delicious traditional Kashmiri vegetarian foods and sweets.

Afterwards we came together for the next four days to meditate and study audio recordings of Swamiji from the Archives: Swamiji’s collection of verses, the “Wisdom of Kashmir Shaivism”, Abhinavagupta’s Tantraloka 13th Ahnika, and the newly published book “The Mystery of Vibrationless-Vibration in Kashmir Shaivism: Vasugupta’s Spanda Kārikā, Kṣemarāja’s Spanda Sandoha“.

Below is one of the many gems from the texts we studied, an extract from the Tantraloka 13th Ahnika revealed by Swami Lakshmanjoo…

In Purāṇa also, in historical tantras also–tantras which propound only histories of the past saints–in those historical śāstras also it is said tasyaiva prasādād bhaktiriṣyate when bhakti, love and devotion for God arises from his grace. It does not rise from your good actions, developing good actions or meditating and weeping, it does not.

SWAMIJI:  How does it appear?

DENISE:  By his grace.

So there must be unlimited handling, it must be from above.

There is eva–eva means only.

What does only indicate–the only word there in Purāṇa–what does this indicate?

Evakāreṇa, this only word, which is existing in that Purāṇa; only by his grace bhakti rises, devotion and attachment for Lord Śiva rises, appears.

What is meant by only, this word only?

Eva kāreṇa karmādi sāpekṣa tvaṁ niṣidhyate ‘only’ means not by your effort, not by your conducting manners, conducting discipline, conducting bhakti and fasts and penance; and all those things won’t do anything.

SWAMIJI:  By his grace only; by his only grace if he wills. If he wishes you are free.

DENISE:  And he wishes for no reason.

SWAMIJI:  No reason, there is no reason.

SWAMIJI:  Just his independent will.

This is what is meant by eva–only; by only his will the grace shines.

What is prasāda, what is grace?

He explains the word grace-prasāda.

DENISE:  What’s the clean surface, what do you mean?

SWAMIJI:  Without bad thoughts, only attachment for Lord Śiva, that is clean surface inside you. When it is not clean surface you crave for going to talkies, going to cinema, going to dinners, and lunches like that.

He has got some śaktipāta . . . he does not like to go for lunch.

SWAMIJI:  In the same way.

Not by purifying your nature, but by his grace.

DENISE:  Can it be perfect, I mean, as long as there is a body isn’t there some imperfection there?

SWAMIJI:  There is some slight imperfection, that too will vanish at the time of leaving this physical frame.

DENISE:  So until you leave your body you are like Śiva.

SWAMIJI:  You are like Śiva, you are not one with Śiva; yes, you can’t be.

SWAMIJI:  Yes, you are just like him; all manners . . . in Kashmiri you call it wattabeta, all wattabeta is just like Śiva.

BHAGAVAN DAS:  All your movements, actions.

SWAMIJI:  Movements, actions, all are divine.

(source: Abhinavagupta’s Tantraloka, 13th Ahnika, as revealed by Swami Lakshmanjoo
unpublished text from the Archive of the Lakshmanjoo Academy)
All Content is subject to Copyright © John Hughes.