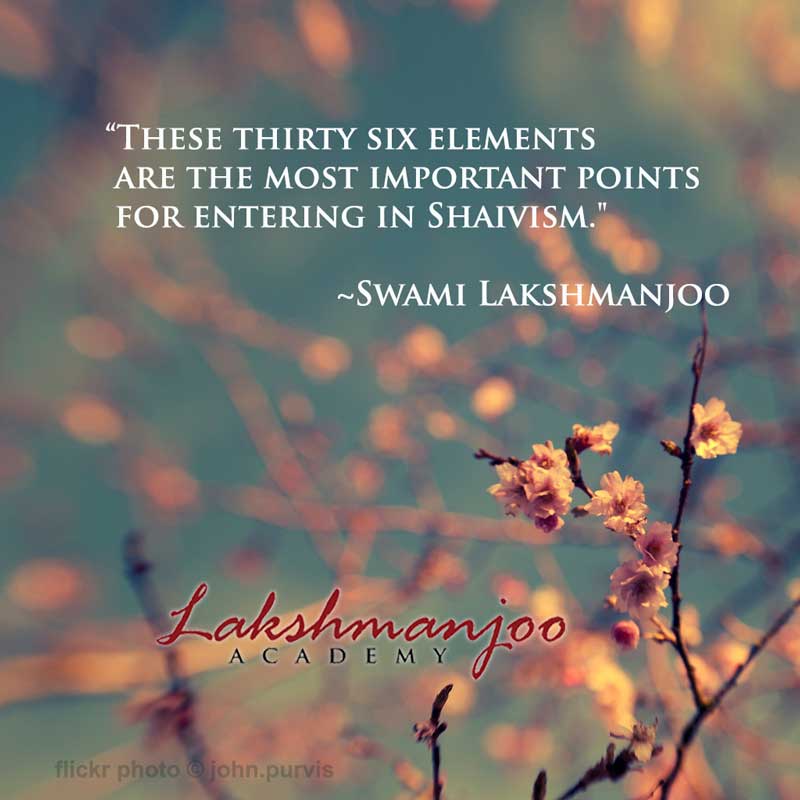 Below is the transcript of the audio that accompanies the Book Kashmir Shaivism, The Secret Supreme. Read the first chapter of the book with a diagram of the tattvas on our website. You can also study the “Tattvas (Elements); The Building Blocks of Creation according to Kashmir Shaivism” as an online course the Lakshmanjoo Academy created from a live online event, along with Q&A and discussions by John, Denise Hughes and George Barselaar, who studied and lived for many years with Swami Lakshmanjoo.

“These thirty-six elements are the most important points for entering in Shaivism.” ~Swami Lakshmanjoo 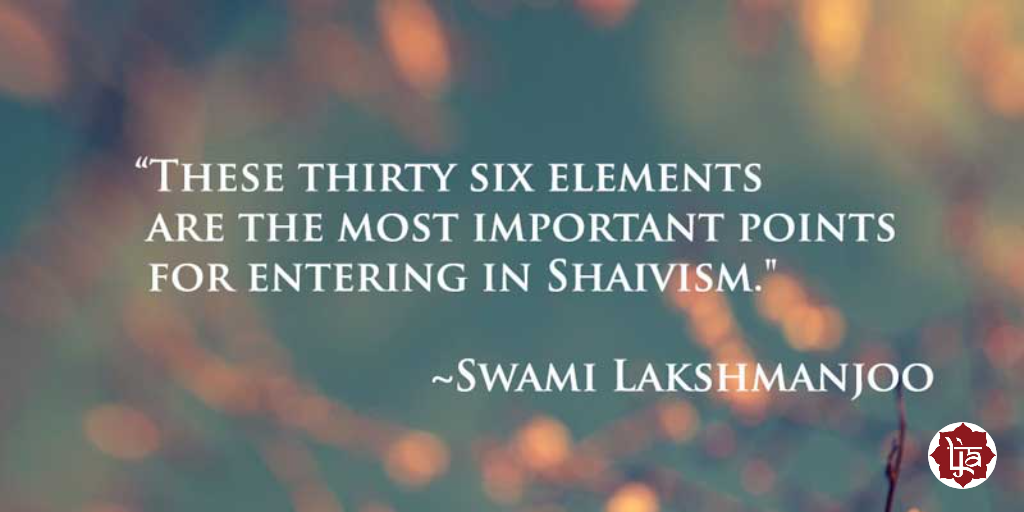 Chapter One – The 36 Tattvas 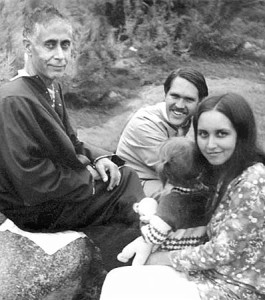 Swamiji with John Hughes and family 1972

JOHN:  To be attended by John and Denise Hughes at Swamiji Shree Lakshmanjoo’s ashram in Srinagar, Kashmir, on November 25th, 1971 at 2:30 pm. This will be the first lecture given by Swamiji to the two of us.

SWAMIJI:  For the time being, I would like to tell you something regarding the tattvas (elements).1 In Vedānta, we have got, we explain, twenty-five tattvas.2 But in Shaivism there are thirty-six [tattvas]. [So] first I want to tell you regarding the explanation of the tattvas. I will begin from the lowest degree of the tattvas, I mean, the gross [tattvas].3 The gross tattvas are called the Pañca Mahābhūtas, the Five Great Elements.

SWAMIJI:  Mahābhūtas, yes. Earth (pṛthvī), water (jala), fire (tejas), air (vāyu), and ether (ākāśa). These are gross and these are called mahābhūtas because the whole universe is based on these five bhūtas.

JOHN:  These five elements (earth, air, water, fire, and ether–ākāśa), they are pretty much the same for most Indian philosophies, is that right?

SWAMIJI:  Yes, these are the same.

JOHN:  In Greek philosophy, too, they are pretty much the same.

SWAMIJI:  Gandha tanmātra. And the next one has come out from the water mahābhūta–jala.

SWAMIJI:  Rasa. Where the impression of taste resides is called rasa tanmātra. And then from agni (tejas, fire) comes out rūpa tanmātra.

JOHN:  Form. So this would be sight, then.

JOHN:  Then this would be in conjunction with sight.

SWAMIJI:  Yes. This is in conjunction with sight. That will come afterwards.6

These are the most important points for Shaivism, to enter in Shaivism.

SWAMIJI:  No, these thirty-six elements.

JOHN:  Ether, but that is not perceptible.

SWAMIJI:  Not perceptible, it gives you room to walk.

SWAMIJI:  Yes space, it is space.

JOHN:  Without air. It is just space, air-filled.

SWAMIJI:  Air fills into it.

SWAMIJI:  And these tanmātras are clear now.

SWAMIJI:  And then what comes out are the five karmendriyas, the organs of action.

JOHN:  Now, these are all objective elements here?

SWAMIJI:  These are all objective.

JOHN:  Even the karmendriyas?

JOHN:  These are objective.

SWAMIJI:  Objective, with body, with mind, with even ātman (the soul)7 also, [they are] called objects in Shaivism.

SWAMIJI:  Only that super Being (Paramaśiva) is subjective.

SWAMIJI:  Pāyu; pāyu is the organ for passing stools. Upastha is for water. Then comes the tattva, pāda tattva–pāda. Pāda means, foot, by which you move about. This is also a tattva in our system. In Vedānta also, this is a tattva–pāda. And then is pāṇi.

SWAMIJI:  Hand. Hand is another tattva by which you take and give. And then is vāk, the organ of speech. These are five?

And then comes five organs of cognition.

1 Lit., the essence or substance of anything. As Swamiji will explain, “It creates and is not created. [A tattva is] un-manifested and manifestation comes out from that.” Kashmir Shaivism–The Secret Supreme (LJA archive). “Tattva means, ananāt iti tattva, that which is adjusted in many–that is a tattva. A tattva is not one. This chair, you cannot say [that] this is a tattva. This specks, this is not a tattva; a pot is not a tattva, a body is not a tattva. A tattva is that substance which is found adjusted in many things, [as] one function, pervading many things, not all.” Tantrāloka 9.2 (LJA archive).

4 Lit., subtle (tan) elements (mātrā). “Tanmātras means, where it is there, it is existing there, although it is not vividly seen, vividly perceived.” Tantrāloka 9.271 (LJA archive).

6. Sight (cakṣu) is the 18th tattva which is in the category of jñānendriyas.

Source: Kashmir Shaivism, The Secret Supreme, book with free audio.
Read the first chapter of the book with a diagram of the tattvas on our website.
You can also study the “Tattvas (Elements); The Building Blocks of Creation according to Kashmir Shaivism” as an online course the Lakshmanjoo Academy created from a live online event, along with Q&A and discussions by John, Denise Hughes and George Barselaar, who studied and lived for many years with Swami Lakshmanjoo.
All Content is subject to Copyright © John Hughes.