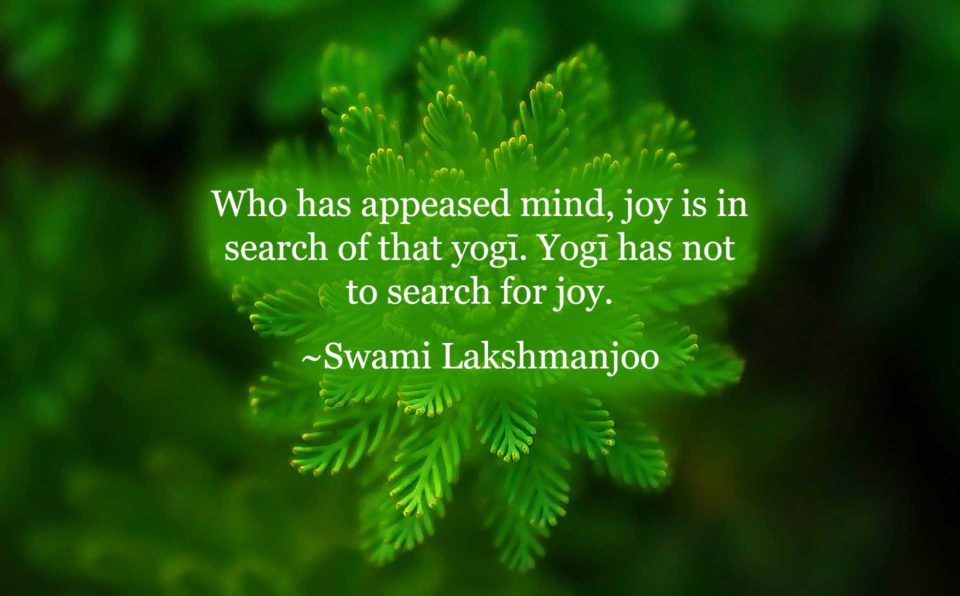 This is Swami Lakshmanjoo’s translation of chapter 6, verses 21 to 24, of Abhinavagupta’s commentary of the Bhagavad Gita explaining the stages of mind and the joy of an appeased mind in Kashmir Shaivism.

In the summer of 1987 Swami Lakshmanjoo began compiling important verses from the various scriptures he had studied throughout his life. Each Sunday he would distribute one or two slokas to devotees, at the same time giving in brief their essential meaning. In all Swamiji revealed a total of eighty-five verses. The following year Swamiji traveled to Nepal where he spent a month with the Hughes family.

During that time he translated all eighty-five verses, explaining them and revealing their essential spiritual and practical meaning. We are truly blessed that we were able to video record Swamiji reciting and revealing these special verses on practice. When asked about the source of these verses Swamiji replied, “It is not for research, it is for your daily recitation . . . maybe sometime you will experience these stages . . . it will be helpful to you in your spiritual practice.”

These, or one more?

I’ll show you how to note it down. Give me a pencil. Like this; kulakam means it has got connection with all these.

Now I will explain the meaning of this.

Yatroparamate cittaṁ there when he takes this vow, according to the directions of his master, “that I have to do accordingly what I will feel that has been ordered within,” after taking this vow perfectly the time comes yatra uparamate cittaṁ, niruddhaṁ cittaṁ, his mind, sādhakas mind, mind of sādhaka becomes, takes the position of niruddhāvāsta.

There are so many stages of ones mind; first is kṣipa, second is vikṣipa, third is ekāgra, fourth is niruddha. Kṣipa means when you think, “this is tape recorder, this is pencil”, i.e. without any meaning what for you are thinking.

DENISE:  Mind just moves from one thing to the next.

What is this called . . . this is called kṣipa.

JOHN:  Because you don’t realize that your mind went away.

SWAMIJI:  Went away, you are unaware; at that time you are unaware. And afterwards you think, “Oh I was meditating, what have I done, I am thinking of almira [wardrobe], or book now.” That is the position of mind, it is called vikṣipa.

Then comes third state of mind when you are bent upon putting it on one point with concentration. That is called ekāgratā, one-pointed. When you keep it in one-pointedness it tries to go away, it tries to go away. Every now and then it tries to go away to some other object, to some other object. You have to be attentive in such a way that you don’t let him go to that object. Before he goes to [that] object you drive him back to his own point. This is the state of mind which is called ekāgra. Then you have to go like this, this also has nothing to do with yoga. Samādhī is not possible in this way also.

And afterwards the state of mind comes in such a way that it becomes nirudha, it does not go away at all. If you drive it away it won’t go, it will go to one point. That is nirudhāvāsta, that is when this mind has taken the position of nirudhāvāsta. Nirudhāvāsta is one-pointedness, automatic, when you have not to drive him again back and back to return to his point.

Niruddhaṁ yogasevanāt by the practice of yoga, continuity of yoga, this mind, when it takes the position of niruddhāvāsta, yatra uparamate, where this mind automatically ceases to function. It does not function in the way it was going to do this function, i.e. function of going here and there.

Yatra caivātmanātamānaṁ paśyannātmanituṣyati, and where ātmanātamānaṁ paśyan, he realizes the nature of his own Self consciousness. And ātmanituṣyati and he is satisfied with enjoying the bliss of Self consciousness, at that time. Sukham ātyantikaṁ yattat, he experiences the sukha–this is second śloka–at that time he experiences the sukha; sukha means joy.

And what kind of joy?

Ātyantikaṁ, where there is no parallel, there is no parallel joy to it. That joy he experiences at that moment when he realizes the nature of his own Self at that moment. It is tremendous joy he experiences. And that joy is not seen by eyes, it is not felt by your organs. Buddhi grāhya it is felt by your intellect only, internal intellect, super intellect.

Where this joy is felt na caivāyaṁ sthitaścalati tattvataḥ, and when he is absolutely established in that joy, na calati, then he does not move from that joy at all.

There is another point to be watched and marked there at that time. Yaṁ labdhbā when this joy is achieved, this automatic joy, āparaṁ lābhaṁ manyate nādhikaṁ, then he feels there is no another joy like this in all the one hundred and eighteen worlds; this is the only joy which one has to possess and own.

You can’t imagine the fullness of that joy nādhikaṁ tataḥ, he does not feel any other joy like this. Yasmiṁ sthito, when he is established once in that joy na duḥkhena guruṇapi vicālyate, even heaps of tortures come in front of him, heaps of pains come in his experience, na vicālyate, he is not moved by those. He is not moved at all by those pains and sorrows and sadnesses of the world. This sadness of world, if it comes to him, it appears as if it is in that joyous position. It is just like scratching a little bit . . . bas, that also is joyful.

SWAMIJI:  Just scratching like this, bas, no more. It is fun for him afterwards. It becomes fun, it is not saddening.

JOHN:  Anything in this world?

SWAMIJI:  Any torture, any pain, he feels just additional joy.

SWAMIJI:  Last śloka is in this connection.

DEVOTEE:  So nothing is to be excluded.

DENISE:  He is not afraid of anything.

SWAMIJI:  . . . everything is included there.

But that does not take place in this experience of this joy. This is not boring joy, you want to have it again and again the same way.

SWAMIJI:  Nourishing, it is nourishing.

JOHN:  You crave after it, is it? I mean you never get enough.

SWAMIJI:  But you want to have it again and again.

JOHN:  That’s what I mean, you can never get enough.

Praśānta manasaṁ that yogi whose mind if praśānta, whose mind is appeased from all sides; there is no need to worry about his position of mind, his mind is appeased, it has come to this perfect statement of being appeased. Yoginaṁ for that kind of yogī, sukham uttamam upaiti, praśānta manasaṁ hyenaṁ yoginaṁ, yogi becomes object there. Yogi has not to find out the reality of God, the reality of the nature of God; yogi has not to find it. The nature of God has to find this yogī. That is what he says, praśānta manasaṁ hyenaṁ, it is objective, he has to become object. Yogī has to become object for this joy. Joy has to go to him . . . joy will find yogī. Joy wants to find out that yogī.

SWAMIJI:  Who has an appeased mind.

So joy is after finding out, in search of that yogī. [So] that yogī has not to search for joy.

That is Abhinavagupta’s interpretation of that Bhagavad Gītā verse.

SWAMIJI:  Yogī has to remain passive, he is not active. Joy is active.

JOHN:  So this is automatic. This is that point in sipping down where, from then on God carries you, there is nothing to do from your side.

That is what he says in this śloka.

Praśānta manasaṁ hyenaṁ yoginaṁ sukham uttamam upaiti śānta rajasaṁ, this is śānta rajasaṁ, where all the activity of the world is appeased brahma bhūtam, he is absolutely one with God, he has become one with God, why should he worry about God. God has to search for him akalmaṣam, he is without any akalmaṣa. Akalmaṣa means there is no dirt, without dirt, he is absolutely clean. He has clean mind, he has no dirt in his nature.

DENISE:  You mean no malas?

And God is bent upon finding him, he has to remain lying on sofa.

DENISE:  Not even waiting.

SWAMIJI:  It is His [God’s] headache to see him.

DENISE:  He is fine already, he is appeased.

They have spoiled this roman.

Yuñjanne vaṁ sadāt mānaṁ, this way you should contemplate always; yogi should contemplate this way niyata mānasaḥ, and keeping his mind absolutely under control, full control. Full control means that nirudhāvāsta. When it keeps quiet, it does not move. If you are away also, if you are not attending your mind, mind has no guts to move; it won’t move, it is appeased. This way yogī should act. Sukhena, he has not to put effort to realize the position of God then. Sukhena, playfully brahmasaṁyogam atyantam, he becomes one with supreme God consciousness playfully, without doing any effort he attains the state of God consciousness for all times.

Source: Archives of the Lakshmanjoo Academy
All Content is subject to Copyright © John Hughes.