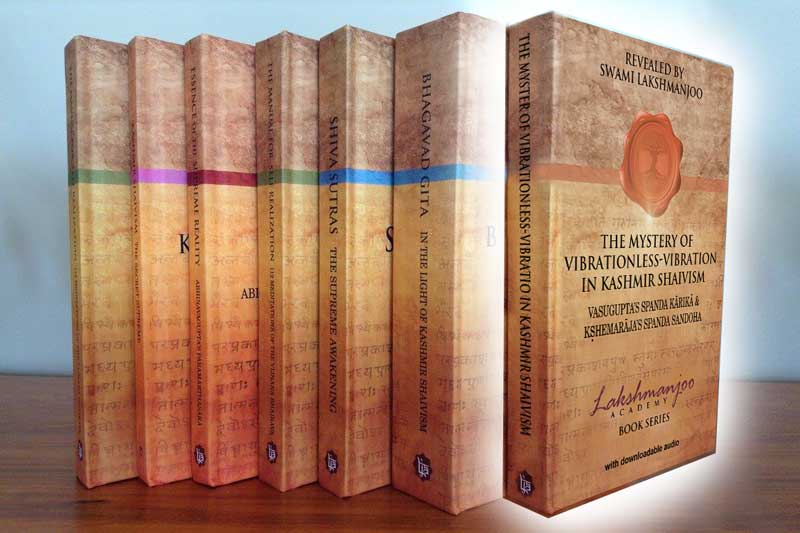 We are delighted to announce the publication of our seventh book in the Lakshmanjoo Academy book series. This book is called

In this book, Swami Lakshmanjoo reveals two important texts, the Spanda Kārika and the Spanda Sandoha from the philosophical tradition of Kashmir Shaivism. These two texts are important in many ways but especially because they introduce us to the principle known as Spanda.

The 300-page book, which includes a free downloadable audio of the original lectures by Swami Lakshmanjoo, is available as hard cover, soft cover book and ebook now.

You can also order the complete nine book series here.

So what is Spanda?

Swami Lakshmanjoo in his translation and explanation of these texts defines Spanda as stable movement. Later he further expands on his initial definition by describing it as motionless motion or vibrationless vibration. In the Spanda Kārika we are told that all that is manifested in all states of consciousness, including the physical world, exists because of oneness with the Spanda principle. Spanda is the life of this world.

The noted Quantum Physicist Dr. Lothar Schafer tells us, “Quantum physics is the branch of physics that deals with the elementary constituents of things: electrons, atoms and molecules. At the level of these things we discover that the basis of the material world is non-material, that the virtual states of molecules actually exist as waves. Thus, the empirical world is a creation out of a realm of waves. In Kashmir Shaivism, the visible world comes out of Spanda: subtle vibrations, waves, or throbs of the divine.”

The theory of Spanda is not new. It was hidden in the body of the Tantras and extracted by Vasugupta, founder of the Shiva Sutras, and initiator of monistic Shaivism in the valley of Kashmir. Vasugupta composed the Spanda Kārikā, a text filled with the fundamental precepts (kārikās) regarding Spanda and the philosophy surrounding it.

Kṣhemarāja, the chief disciple of the very important and central figure in the tradition of Kashmir Shaivism, Abhinavagupta, is the author of the second pivotal text regarding Spanda, the Spanda Sandoha. This text is an extensive exposition (sandoha) on the first verse of the Spanda Kārikā.

Order your book and ebook now.

Listen to selected excerpts from the book below…

Please share this Announcement with your friends and family.