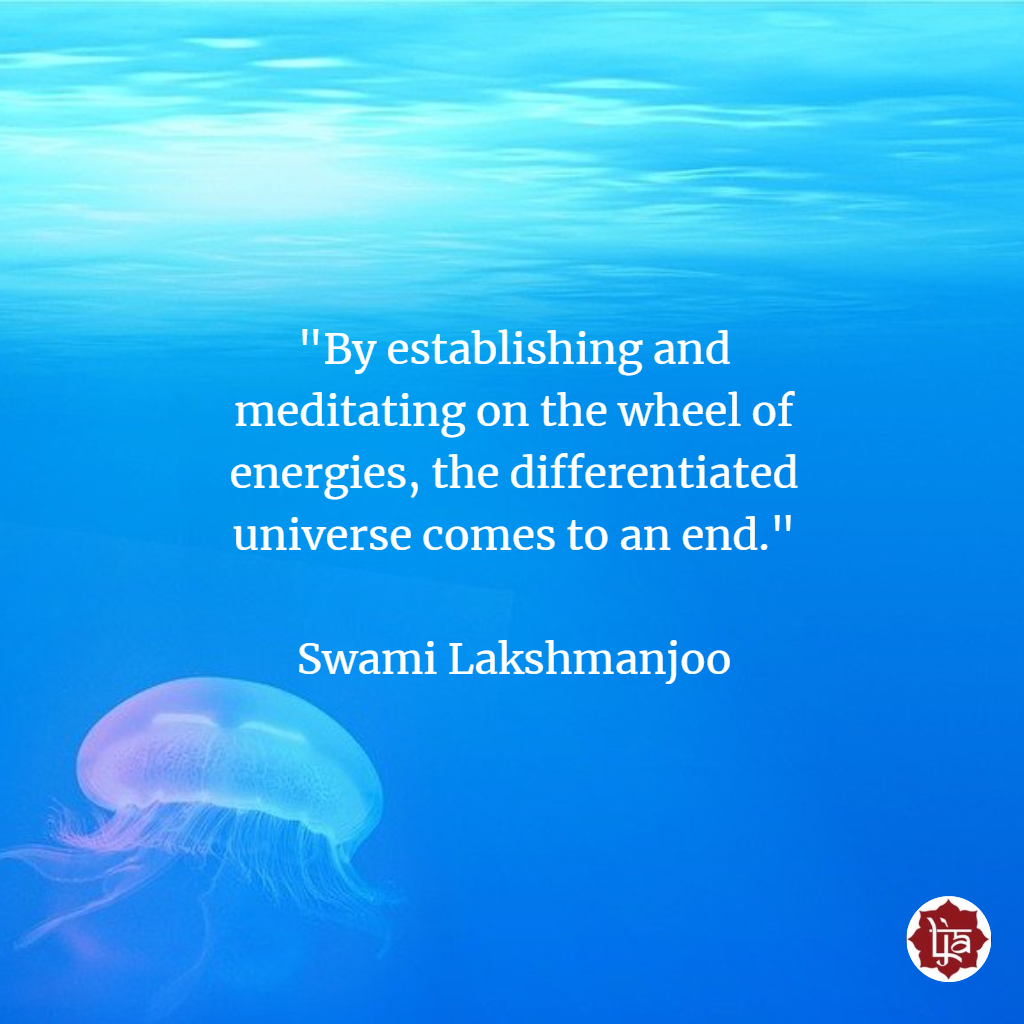 “By establishing and meditating on the wheel of energies, the differentiated universe comes to an end.” ~Swami Lakshmanjoo 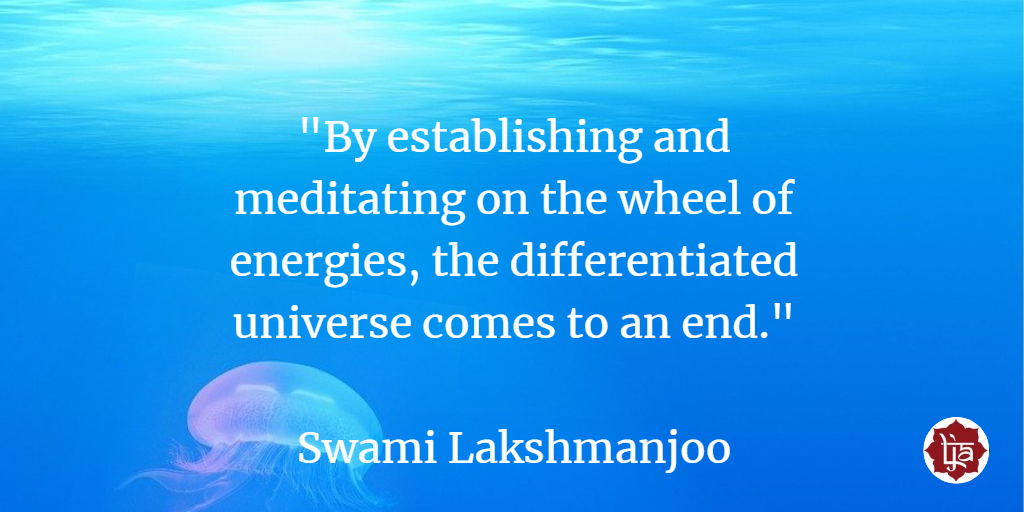 By establishing and meditating
on the wheel of energies, the differentiated universe comes to an end.

Why would they be excluded? They would be excluded because the way does not exist at all. There is no way to go, there is no traveling. From the point you start, that is what is to be held. You have to hold that starting point and that is all.

Although this svātantrya śakti is both successive and non-successive, it is above that. Why? Because it is the supreme energy of Lord Śiva, which is absolutely independent awareness.

The play of creation, protection, and destruction is the recreation of svātantrya śakti.22 Where? In the ground of her own nature (svarūpa). Right from the element earth (pṛithvī) up to the state of the supreme perceiver (para pramātṛi).

When the heroic yogī meditates with continuous contemplation on that collective class of energies of Śiva (śakti cakra),23 which is found in only one energy, svātantrya śakti, he destroys this dualistic universe right from kālāgni rūdra24 up to śāntātītā kalā.25 You must understand though, destruction does not mean that it is destroyed. Although it is individually found, externally found, or found in his own awareness, the heroic yogī feels that the entire universe has become one with the fire of supreme consciousness.

The secret teaching is contained in special tantras that remain unwritten and have been orally transmitted from master to disciple.

It is also said in Bhargaśikhā śāstra:

When, at the time of meditating on the wheel of energies, he digests and destroys everything–death, the sphere of time, the collection of all activities found in the world, the totality of all emotions, becoming the object of all perceptions,26 becoming the object of one thought or various thoughts—in his own supreme being he causes that whole to enter in that supreme consciousness of God.

That consciousness, where everything is destroyed and the totality of thirty-six elements is burned to ashes, should be perceived in one’s own body, shining like kālāgni rūdra.27 (Vīravala Śāstra)

The one who meditates on that unspeakable and indescribable being gains entry into his own nature by that trance called śākta samāveśa. (Mālinīvijaya Tantra 2.22)

Now, the author of the commentary, Kṣemarāja, tells us that he will not give us any further clarification because the Mālinivijaya Tantra teaches us that this state and power of contemplation will only appear in the one who serves the feet of a master. He says that a more vivid explanation must come from the mouth of the master.

This is narrated in Spanda Kārikās in this first verse and in the last verse:

By whose twinkling of the eyes, in their opening and closing, this whole universe is created and destroyed . . . (Spanda Kārikā 1.1)

When one is unflinchingly focused to one-pointedness, then he enters in his supreme consciousness . . . (Spanda Kārikā 3.19)

There is no difference between a mystical trance (samādhi) and the world of action (vyutthāna) when the world of dualistic perception is completely digested in one’s own consciousness.

21. In Kashmir Śaivism there are three upāyas (means), śāmbhavopāya, śāktopāya, and āņavopāya. In addition to these three upāyas another called anupāya is also mentioned. The Sanskrit word anupāya literally means “no upāya.” As the name implies, anupāya is not actually an upāya, for in anupāya there are no means. The one who has attained anupāya has only to observe that nothing is to be done. Just to be is enough. In anupāya the aspirant experiences that everything is filled with his own God Consciousness. In fact, anupāya is the unexplainable reality of the liberated aspirant.

24. Kālāgnirudra rests in the element prithvī. Prithvī tattva is the lowest element of the 36 tattvas.

25. Śāntātītā kalā is the abode of Lord Śiva. It is found in the subtlest element, śiva tattva

26. Whenever you perceive an object, you become one with that object.

27. Kālāgni resides in the left big toe. You have to imagine fire coming from kālāgni and this fire burns your body so that nothing, no substance of the body remains un-burned. You must imagine that your whole body has become ashes and the highest peace of God consciousness will shine in your consciousness, in your knowledge. This practice is set out in the Vijñāna Bhairava, where you are instructed to imagine that kālāgni, the fire of God consciousness, has risen from the point of your big left toe.