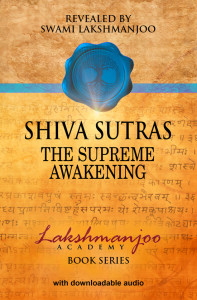 This spiritual treasure, gifted by God to the sage Vasugupta for the upliftment of human kind, is considered to be one of Kashmir Shaivism’s most important scriptures. The Shiva Sutras are divided into three parts. And according to Kshemaraja, the commentator, the three parts correspond to the three means (upayas) for the attainment of liberation as revealed by Kashmir Shaivism. These upayas are the means for traveling from individual limited consciousness to universal God consciousness. The first and highest means, for highly qualified aspirants, is called shambavopaya. The second, for aspirants of medium qualifications, is called shaktopaya. And the third, for inferior aspirants, is called anavopaya. Thus, the first awakening of the Shiva Sutras explains shambhavopaya; the second awakening explains shaktopaya, and the third awakening explains anavopaya.

Drawing from the Malinivijaya Tantra Abhinavagupta defines shambhavopaya as the upaya wherein the aspirant achieves entry into supreme consciousness just by the grace of his master, without adopting any process. He does not use thought (dhyana), mantra, or any other aid to meditation. Shaktopaya he defines as the upaya where the aspirant achieves mystical entry (samavesha) through contemplation of that mental object which cannot be spoken or recited. Anavopaya he defines as the upaya where mystical entry takes place through concentration on parts of the body, contemplation (dhyana), recitation, taking the support of breath (uccara), and mantras.

Shiva Rock (Shankaropal), where fifteen hundred years ago, the Shiva Sutras were revealed to the Sage Vasugupta

Order the Shiva Sutras: The Supreme Awakening by Swami Lakshmanjoo from our website.