Kashmir Shaivism The Secret Supreme.
Scholars past and present have been at a loss to understand the cryptic language that Abhinavagupta used in his writings. Yet in this book Swami Lakshmanjoo, without the aid of notes or text books, verbally revealed the essence of the first fifteen chapters of Abhinavagupta’s magnum opus Tantraloka. 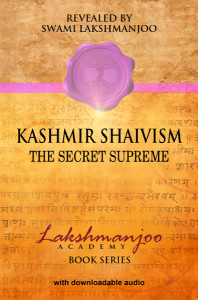 Thirty-six Elements – Tattvas.
The nature of the thirty-six elements (tattvas) from earth to Shiva, and the omnipresent state of Parama Shiva.

Chapter Two
The Six-fold Path of the Universe – Shadadhvan.
Shadadhvan is the explanation of the whole universe both subjective and objective. The three-fold path of the subjective world consists of letters (varnas), words (mantra) and sentences (pada). And the three-fold path of the objective world consists of 118 worlds (bhuvanas), 36 elements (tattvas) and 5 circles (kalas).
(For more information see our online course: “Tattvas, the building blocks of creation according to Kashmir Shaivism”)

Chapter Three
The Theory of the Alphabet – Matrika cakra.
The five great energies of Lord Shiva represent the sixteen vowels of the Sanskrit alphabet from ‘a’ to ‘ah’. The consonants from ‘ka’ to ‘ha’ are a reflection of these sixteen vowels. Matrika teaches us that by taking the first and last letter, and adding the vowel ‘m’ you create the universal mantra of Lord Shiva, ‘aham’.

Chapter Five
The Explanation of Means – Upayas.
Kashmir Shaivism proclaims that there are three means (upayas) for entering into the state of Universal God consciousness, i.e. shambhavopaya (supreme), shaktopaya (medium), and anavopaya (inferior). The difference is, in anavopaya you take the support of everything as an aid to strengthening awareness. In shaktopaya you begin in the center and become established there. In shambhavopaya no support is needed, you reside at your own point, the rest is automatic. It is important to realize that although these means are different, they all lead to the state of one transcendental consciousness.

Chapter Six
The Theory of Speech – Vak.
In the kingdom of speech there are four levels, i.e. para, pasyanti, madhyama and vaikhari. Para is that supreme speech which resides in your own universal consciousness, it is the life of the other three kinds of speech. Pasyanti is called the subtlest speech without thought or differentriation. Madhyama is subtle speech where you reside only in thought without sensation. This is the same as dreaming. Vaikhari is the gross state of ordinary speech. The aspirant has to travel from pasyanti to madhyama and then to vaikhari. In this journey one does not travel to para because para is supreme.

Chapter Seven
The Three Impurities – Malas.
In Shaivism there are three impurities (malas) which reside in the element of illusion or maya. Karma mala is gross impurity that gives rise to the impression of pleasure and pain. This is expressed in the statements, “I am happy, I am sad.” Mayiya mala is the subtle impurity that creates duality. This is expressed in the statements, “This is mine, this is not mine.” Anavamala is the subtlest impurity which makes one feel incomplete.

Chapter Nine
The Seven Processes of the Seven Perceivers – Pramatrin.
The seven processes define the nature of perception in the fifteen-fold mode of rising and its relation to the thirty-six elements or tattvas. On completion of this process one realizes that the existence of Shiva is the same in the starting point (earth tattva) as it is in the ending point (Shiva tattva). Here one realizes there is really nowhere to go and nothing to be done.

Chapter Ten
The Five Great Acts of Lord Shiva – Pancakrityavidhi. (Grace)
Creating, protecting, destroying, concealing and revealing are the five great acts of Lord Shiva. The individual soul also accomplishes these five acts and feels he is acting according to his own will, but, in reality his actions are dependent to the will of God, Lord Shiva. Still, as long as he has ego and feels that he is the actor, the limited individual is responsible for his own actions.
In the kingdom of spirituality Lord Shiva creates masters and disciples through his act of revealing, also known as grace or shaktipata. There are three types of grace, intense (tivra-tivra), medium (tivra) and inferior (madhya). Within each of these there are three levels which means Lord Shiva bestows grace and creates masters and disciples in nine different ways. The greatness of Lord Shiva is that no matter what intensity of his grace is with you, it will carry you to his nature in the end.

Chapter Eleven
The Five States of the Individual Subjective Body.
The path of this universe consists of thirty-six elements, and only one universal subjective body of God is traveling in each element. The individual subjective body travels in the five states of jagrat – wakefulness, svapna – dreaming, sushupti – deep sleep, turya – the fourth state, and turyatita – beyond the fourth.
Abhinavagupta explains, that when there is vividness of objectivity, that is the state of jagrat. When this vividness is shaky and unstable, that is svapna, and when this vividness is gone completely that is sushupti. When super-observation is found that is turya, and when objectivity is individually dead and found full of life in totality, that is turyatita.

Chapter Twelve
The Fivefold Contacts of Masters and Disciples.
In this universe from time immemorial the initiation of masters has taken place from Lord Shiva up to mortal beings. This contact (sambandha) of masters and disciples takes place in five different ways, and although our Kashmir Shaivism recognizes these five-fold contacts, it explains that only that initiation is real where the master and disciple becomes one. The real theory of our Shaivism is that this supreme contact must take place between each and every master and each and every disciple. When this occurs, that is a real initiation.

Chapter Thirteen
The Birth of the Tantras
In the beginning of satyuga Lord Shiva appeared in the form of Svacchandanatha with five heads and eighteen arms. In this formation he created the ninety-two tantras of our Shaivism. In the beginning of this present cycle of kali-yuga Lord Shiva appeared on mount Kailash in the form of Shri Kanthanatha and taught these Tantras to the great Rishi Durvasa, entrusting him with the task of spreading these teachings for the upliftment of all humankind. Since that time many great siddhas and masters of this tradition, such as Vasugupta, Somananda, Utpaladeva, the illustrious Abhinavagupta and Kshemaraja, have preserved this teaching for the benefit of sincere seekers. Swami Lakshmanjoo was a direct master of this sacred lineage of Kashmir Shaivism.

Chapter Fourteen
Moksha in Kashmir Shaivism and Indian Philosophy.
The view that ignorance is the cause of bondage and perfect knowledge the cause of freedom (moksha), is commonly accepted by all Indian philosophers. Yet, in reality, these philosophers have not completely understood the reality of knowledge and ignorance. Shaiva philosophy does not recognize the theories of Vaishnavites, Vedantins, Vijnanavadins (Buddhist) or Vaibhashika’s concerning liberation. Kashmir Shaivism holds that these schools do not move above the state of pralayakala, a state of unawareness similar to that of deep sleep devoid of dreams.

Chapter Fifteen
Kashmir Shaivism and Advaita Vedanta.
Although the main principal of Kashmir Shaivism and Vedanta is pure monism (advaita), there are many important differences in their thinking. These differences concern the reality of yoga in action (karma yoga), the function of the intellect in relation to Universal Being, the nature of illusion (maya), the importance of kundalini yoga; and who is eligible to practice a monistic teaching. On this last point Kashmir Shaivism teaches that monistic thought can be practiced by anyone without restriction of caste, creed, color or gender. Whereas most other systems hold women in a secondary position, Kashmir Shaivism holds that women can practice this thought more fruitfully than men.
Kashmir Shaivism is a universal system, pure, real, and substantial in every respect, which can be practiced by everyone.

Chapter Sixteen
The Seven States of Turya.
The practical theory of the seven states of turya, also known as the seven states of ananda or bliss, were taught to the great Shaiva philosopher Abhinavagupta by his master Shambhunatha. These seven states are known as, nijananda, nirananda, parananda, bhramananda, mahananda, cidananda and jagadananda.
In moving from individuality to universality through these seven states the aspirant experiences; the junction between waking and dreaming, the intoxication of giddiness, the world of hideous sounds and furious forms, the blissful whirling of breath, the sipping down of breath and the rise of blissful ecstasy, the blissful consciousness, and finally universal bliss.

Chapter Seventeen
Kundalini and Its Purpose.
Kundalini shakti is the concealing and revealing energy of Lord Shiva. Para (supreme) kundalini is the heart and existence of Shiva, in fact it is the life and glory of Shiva, it is Shiva himself.
When para kundalini creates the universe Shiva conceals his real nature and becomes the universe. Cit kundalini is experienced by great yogin’s, who through maintenance of awareness, enter the junction and experience the rise of the seven states of turya. Prana kundalini is experienced by those yogin’s who are attached to spirituality and worldly pleasure side by side.

Chapter Eighteen
Variations in the Rise of Prana Kundalini.
There are seven variations in the rise or penetration (vedha) of prana kundalini. These are determined by the inherent desires of the individual aspirant. For example, to achieve recognition of supreme I (aham), to uplift others, to have peace of mind, to become strong and maintain perfect physical condition, to experience kundalini in the form of a serpent (cobra), and to give initiation secretly. The type of rise is however, out of the hands of the individual, as it is automatically determined by ones deepest desires and longings.

Chapter Nineteen
The Schools of Kashmir Shaivism.
Kashmir Shaivism is known as the pure Trika system, which means “the three-fold science of man and his world.” It is a system meant for any human being without restriction of cast, creed, color or gender. The four sub-systems of Trika philosophy–known as Pratyabhijana, Kula, Krama and Spanda, form the one thought of Trika. They all accept and are based on the ninety-two scriptures (agamas or tantras) of Shaivism.