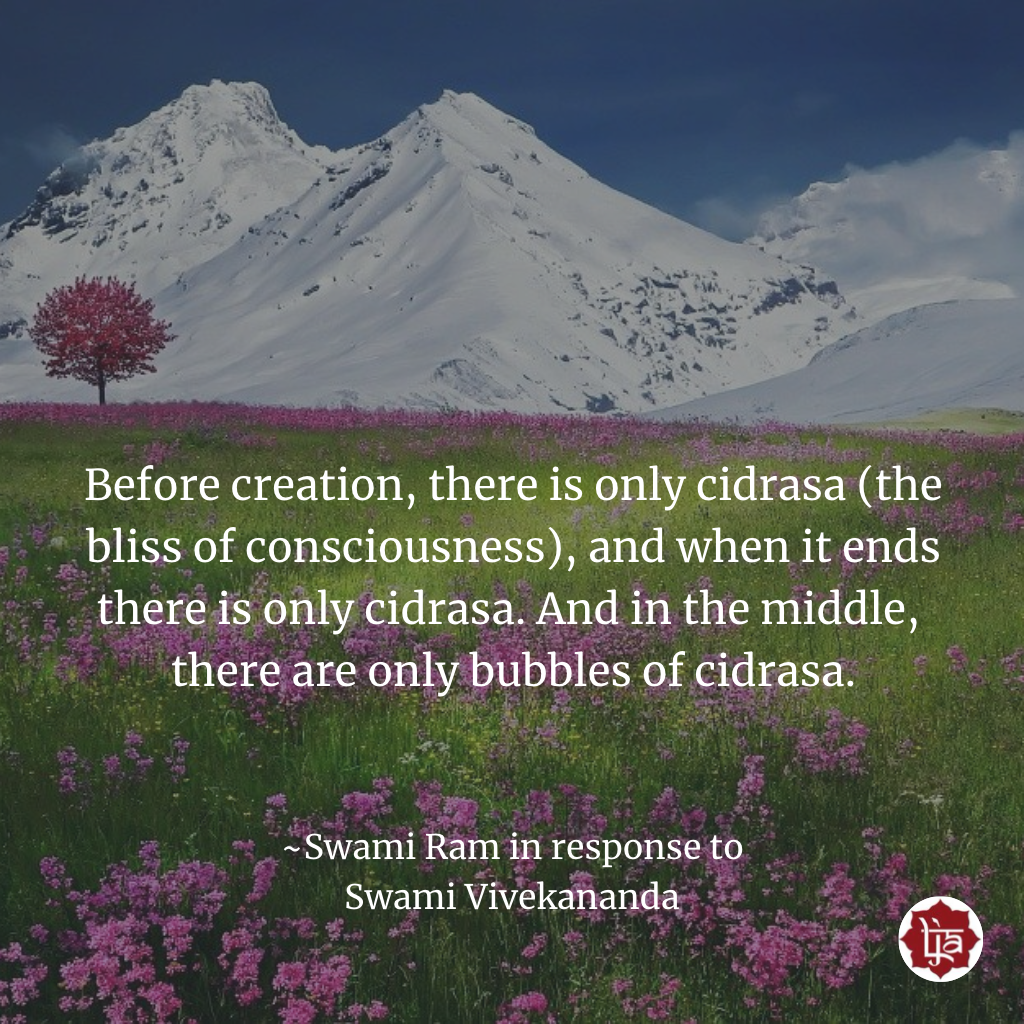 The following excerpts highlight some of the experiences of the renowned Saint, Swami Vivekananda, when he visited Kashmir in 1898.

In the year 1898, on his second visit to Kashmir, Swami Vivekananda once visited their home at Namchibal, Fateh Kadal; he was showered with flowers and garlanded. The Pandits praised Swamiji’s preaching Vedanta in the West and wanted to hear it from him. Swami Vivekananda recited some verses from the Mundakopanishad and explained them to their joy. Aranyamal cooked all the dishes for lunch with great care. Swamiji praised her payasam (rice pudding).

Before leaving Pandit Narayan Das requested Swamiji to bless his wife who had a severe headache that no treatment could cure. Swamiji was silent for a while and then placed his hand on her which cured her completely. Also, the birth of the famous Shiva Yogi Swami Lakshmanjoo was foretold by Swamiji. The truthfulness, steadfastness, and devotion moved Swamiji who commented suddenly, ‘Rainaji, the blessings of the Lord is showering on you. You have changed your home to a temple. This place is best suited for the birth of a divine child.”

After nine years, Swami Lakshmanjoo was born after 17 years of their first child. From his childhood, Lakshmanjoo was immersed in meditation and Samadhi. He embraced sannyasa and become the guiding force of many in India and abroad. He was the most revered teacher, a Shiva Scholar, Guru, and an authority on Kashmir Shaivism. As predicted by Swami Vivekananda, their house later became an Ashram, famously known as Shri Rama Shaiva (Trika) Ashrama.

Aranyamal was simple, devoted, and was dedicated to the service of monks. She would request Pandit Narayan Das to invited monks and would feed them with respect. She also donated liberally to the poor and suffering. In 1900, when a severe storm destroyed life in Kashmir, Aranyamal supplied food for the suffering.

* Also written as Arnimal, which means a “Garland (mala) of roses (arni).” Arni is also translated as the “Sun”. 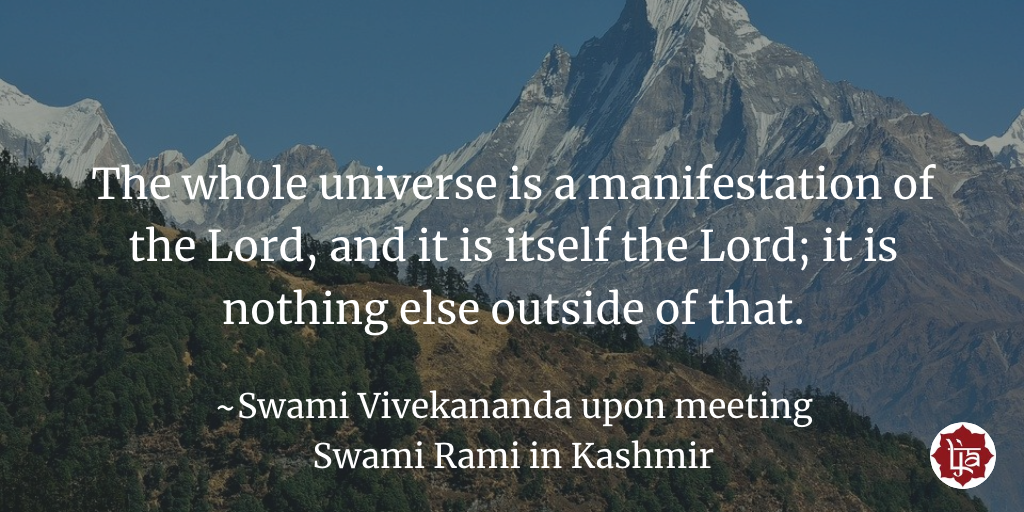 This is an excerpt from Scoop News by Rakesh Kumar Pandit

I take this opportunity to highlight some of the important events of his Kashmir visit. During his stay in Kashmir, Swami Vivekananda was in a different world altogether. He was deeply touched by the beauty of Kashmir. Swami Vivekananda visited Kashmir twice and it was on 10th September 1897, when the lotus feet of this great saint touched the beautiful and pious land of Rishis, once called as Reshver.

His first visit to Kashmir was short and was not so eventful although he visited some of the places of religious and historic importance. People from all spheres of life like Sadhus, Kashmiri Pandits, students, officials went to meet him. The second visit of Swami Vivekanand to Kashmir valley was more eventful. This time a party of Europeans was accompanying him. Prominent among them was Sister Nivedita (Margret Noble).

He stayed in Kashmir from about mid of June 1898 to the mid of September 1898. During this stay, he visited the places of religious and historical importance like Shankaracharya Hill, Hari Parvat, Martand (Matan or Bhawan), Panderthan (Pandresthan, Place of Pandavas), temples of Avantipora, Bijbehara, Moghul Gardens of Nishat and Shalimar. But the focus of this article is his visits to the shrines of Shri Amarnath Ji Cave and Mata Kheer Bhawani in Tulmulla.

The visits of Shri Amarnath and Mata Kheer Bhawani proved to be very unique and the visions he had at both places remained always with him. Such was the spiritual experience of Swami Vivekananda at these places that it is very difficult to put that into words but can only be felt from the actual words of Swami Vivekananda. It also reflects the essence of both these energy centers charged with God’s presence in the vale of Kashmir.

On 27 July, 1898 they left for the pilgrimage. En route, they camped at various places like Phahalgam, Chandanwari, Wavjan. On August 1st, after crossing Sheshnag, Mahagunus top they reached Panchtarni (Place of five streams). On August 2, they reached the Shri Amarnath Ji Cave. When Swami Vivekananda reached the cave he was full with emotion and devotion. Swami Vivekananda entered the shrine nude except his loin-cloth and prostrated before the God-Shiva in the form of Ice-Lingam.

An exalting spiritual experience came to him of which he didn’t speak much in detail but only said, “I thought the Ice-Lingam was Shiva Himself.” When he entered the cave and came face to face with the God-Shiva, Swami Vivekananda had never felt such spiritual exaltation in visiting a holy place as in Amarnath Ji. Afterward, he also said to Sister Nivedita that the God Shiva appeared before him and granted him the grace of Amarnath, which means not to die till he himself a the consent. On the journey back Swami Vivekananda and the party returned to Anantnag and from there they reached on August 8, by boat to Srinagar.

Following the pilgrimage to Shri Amarnath Ji, Swami Vivekananda’s love for the Divine Mother grew intense. At Srinagar, he worshipped the four-year daughter of his Muslim boatman ( Swami was staying in a houseboat at Srinagar) as “Goddess Uma”. When he left Kashmir, she, tiny one carried a tray of apples for him all the way to the tonga herself. On September 30, Swami Vivekananda left for Mata Kheer Bhawani at Tulmulla, leaving strict instructions to his party not to follow him. He stayed there almost for a week. He daily performed Havan there and worshipped the Mother with offerings of Kheer. Every morning he worshipped a Brahmin Pandit’s little daughter as “Uma Kumari.”

One day at Kheer Bhawani while worshipping, the thought of the ruination and desecration of the temple by the Muslim invaders left him distressed at heart. He thought that Mother has been manifesting Her presence here for untold years, “How could the people have permitted such sacrilege without offering resistance.

If I had been here then, I would never have allowed such a thing. I would have laid down my life to protect the Mother.” Thereupon he heard the voice of the Mother Goddess saying, “What if unbelievers should enter My temple and defile My image? What is that to you? Do you protect Me, or do I protect you?” Another day, in course of his worship, another thought flashed through Swami Vivekananda’s mind that he should try to build a new temple in the place of a present dilapidated one. He even thought of trying to raise funds for this.

At once the Divine Mother said to him, “My child, if I so wish I can have innumerable temples and monastic centers. I can even this moment raise a seven-storied golden temple on this very spot.” Referring to these experiences after his return, he said to his disciples, “All my patriotism is gone. Everything is gone. Now it is only Mother! Mother! I have been very wrong. I am only a little child.” Since I heard that divine voice, I have ceased making any more plans. Let these things be as Mother wishes.”

It is often said that the vision at Tulmulla made him realize, what he is and for what he is in this world? Ramakrishna Paramahansa his Guru had once prophesied during a discourse with his close disciples that when Vivekananda realizes who he is, he will not like to live anymore in this world and would depart from it. On July 4, 1902, Swami Vivekananda at the age of 39 years, 5 months, and 24 days left his mortal cage, to reunite with the Supreme Energy of this Cosmos, thereby fulfilling his own prophecy, ” I shall not live to be forty years old.” 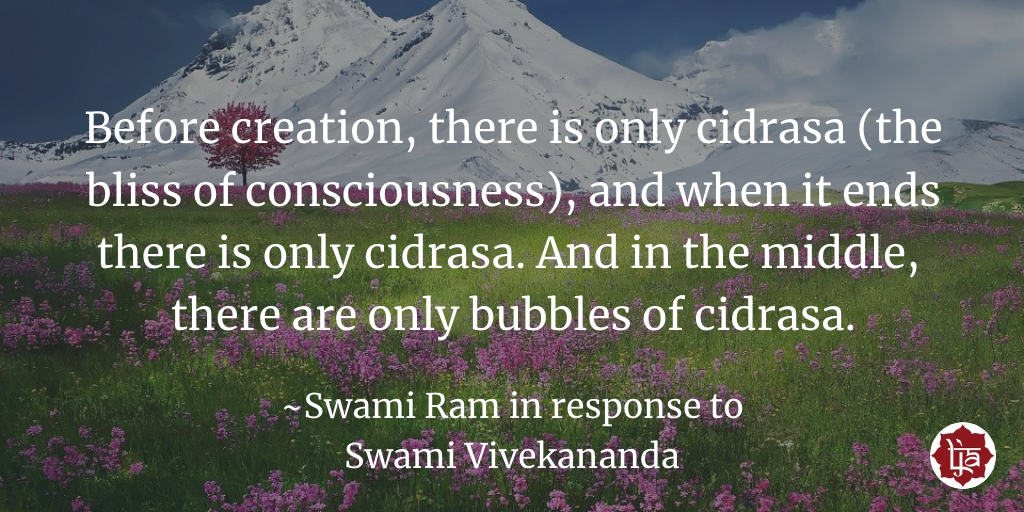 For the past century, it has been common knowledge among Kashmiri Pandits that while in Kashmir Swami Vivekananda visited the Ashram of the great grand Master of Swami Lakshmanjoo (Swami Ram).

When he entered the room, Swami Ram, recognizing Vivekananda to be of a Saintly nature, requested his devotees to recite the ten verses of the Bhairava Stotra, a hymn composed by the Illustrious Shaiva Master, Abhinavagupta, (924-1020 CE).On the completion of the hymn, Vivekananda, moved by the import of Abhinavagupta’s words, spontaneously recited the following śloka:

The whole universe is a manifestation of the Lord, and the whole universe is itself the Lord; it is nothing else outside of that. In the Lord and in the universe there is not an iota of difference. One who has this intellect, can attain that highest state and cross this ocean of saṁsāra (repeated births and deaths).

Swami Rām, in response, followed with an additional verse.

Before creation, there is only cidrasa (the bliss of consciousness), and when creation ends there is only cidrasa. And in the middle, there are only bubbles of cidrasa. The one who always meditates on this, soon realizes that it is all prakāśa and nothing else. But, if you don’t meditate on this, still it is cidrasa, it has not gone anywhere.

Since that auspicious meeting, these additional verses have always been recited at the end of Abhinavagupta’s Bhairava Stotra, and even to this day, it is recognized by Kashmiri Pandits that these verses were composed impromptu by Swami Vivekananda and Swami Ram, during that fateful meeting.

Listen to those two verses sung by devotees below…

Additional information about Swami Vivekanand in Kashmir can be viewed
by following this link: https://www.ikashmir.net/saints/vivekananda1.html