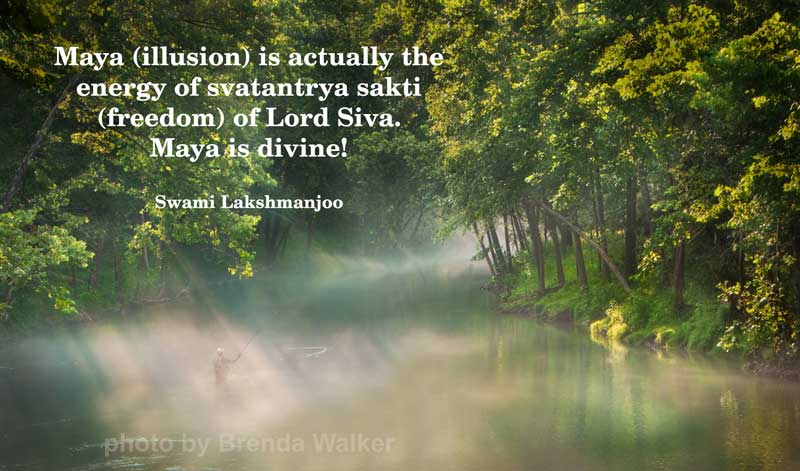 SWAMIJI: It is only freedom! It is only [because of] freedom that He conceals His nature–out of His freedom, free will.131

JOHN: He’s not forced by any karma or anything else to do that.

SWAMIJI: Māyā is very bad. In our school, māyā is divine.

SWAMIJI: What is it? For instance, [they say], don’t go to sex, don’t go . . . [but we say], see the beauty of Ellen133 and divert your attention towards God consciousness, bas.

JOHN: This is ours, not theirs.

SWAMIJI: That is ours.

JOHN: And they would [say] to just reject everything?

SWAMIJI: If you find attachment, individual attachment, that is māyā. That you should leave. You should feel everything [as] divine, then there is no māyā, there is svātantrya śakti.135

ERNIE: No but, in the Buddhist School, they feel that it’s the absence of knowledge?

SWAMIJI: They feel [that], yes.

JOACHIM:  It is unreal, it is not reality.

SWAMIJI: It is not real.

JOHN: Yes, but in this particular illustration . . .

SWAMIJI: Not only in Ellen, I mean, anybody.

JOHN: But in this particular one, for a Vedāntin to look at Ellen and see anything, that would just all be false.

SWAMIJI: Vedānta directs us [that] you should not see –“citra nikatam api naram na paśyati”–you must not see a woman, [even] a photograph of a woman. What to say of seeing a woman and talking to her? It is a blunder [according to Vedānta].

ERNIE: This is a very important difference in Śaivism, . . .

SWAMIJI: Everything is divine, if you feel like that. So, that is paryanta viśeṣaḥ.

Have you understood it?

133 Ernie Montano’s girlfriend at that time.

136 “Bhaṭṭa Nārāyaṇa does not [only] say “me”, as he includes all of his brothers and sisters who are with him, [that they] should be protected.” Stava Cintāmaṇi (1990).