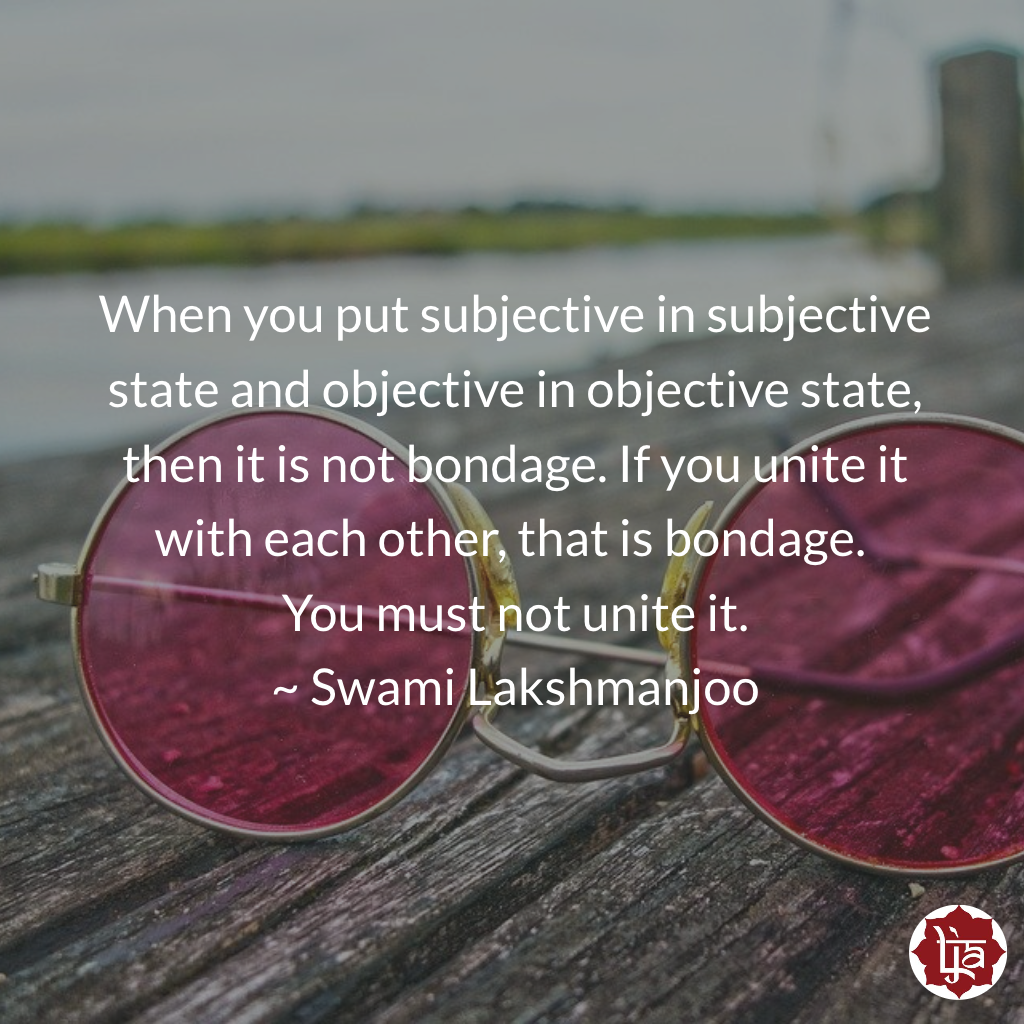 In this excerpt, from the Shiva Sutras, First Awakening, Verse 4, Swami Lakshmanjoo reveals to us how we become the victim of bondage. This is a continuation of the first part of Verse 4, “How does this threefold mala becomes the cause of bondage (Shiva Sutras 1.4 part 1)“. 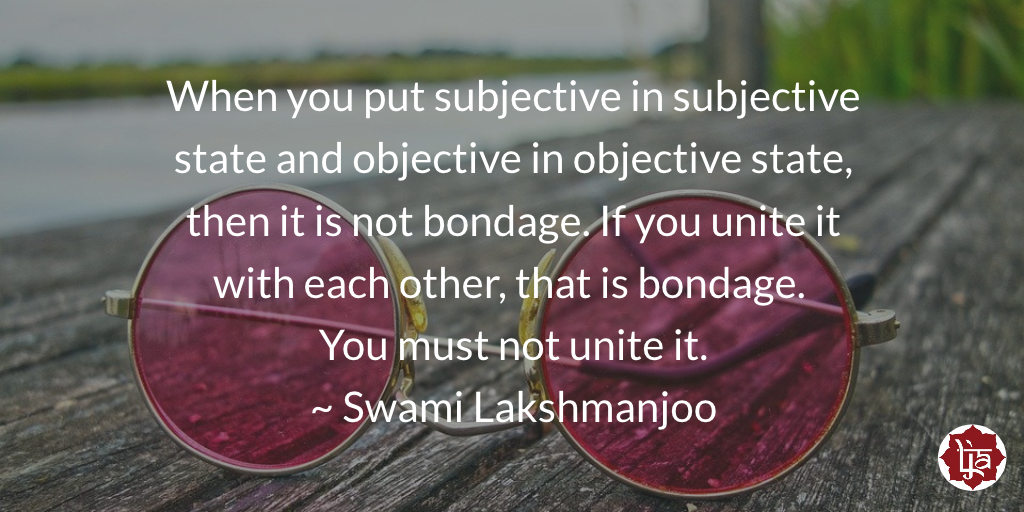 The one who is played by Mātṛkā, i.e., who has become the play of the mother.

We are played by the mother.

JOHN:  Then that mother becomes his svatantrya (freedom).

There is no Beauty Corner, there is no Book Corner; there is only corner of pain and pleasure everywhere found by him.

JOHN:  These are deities of these organs?

SWAMIJI:  Yes, these are khecarī, gocarī, [dikcarī and bhūcarī]: these organs; organs of action and organs of knowledge, mind, intellect and ego.

JOHN:  So they serve to bind him, even more, every day?

DEVOTEE 1: Where is the brahmarandhra?

DEVOTEE:  When consciousness does it the right way [unclear?] . . . in karandra?

SWAMIJI:  In karandhra there is consciousness. And that consciousness has come out from the D.P. Dhar’s body and is dead.

DEVOTEE:  It resides in brahmarandhra.

SWAMIJI:  It resides in brahmarandhra, in brain. It’s a good point.

JOHN:  What is the chief way they delude? By having him think that they are his self?

But the one who is the player he will never be sad, he will enjoy that also.

Sometimes he will hear, “our business is growing more and more rapidly,” he’ll be also the victim of pleasure at that time. Both ways he’ll be played by Mātṛkā, not the player. This is not the way of being the player.

JOHN:  So the player doesn’t have the experience of pleasure in this sense then, the player?

SWAMIJI:  He has, but he is aware of his own nature, he never comes down.

JOHN:  It doesn’t bind him then?

SWAMIJI:  It doesn’t bind him.

DEVOTEE:  What is the meaning of kalā, varga and kalā?

Varga means nine vargas, that is words, sentences and letters.

Vācya: object, objective world; and vācaka, the world which is told, nominated.

This is objective world [Swamiji holds a pair of spectacles].

What is the subjective world of this?

DEVOTEE:  This is objective world?

SWAMIJI:  This is objective world, vācya, the object.

What is the subjective world of this?

This [object] is not “specs”. This is another world being attached with this.

This [lady] is the objective world.

What is the subjective world for this?

JOHN:  So then the subjective aspect of some object is the name of that.

JOHN:  But the idea of that, is it the word that’s the idea, or is it the picture of the idea in your mind?

Somebody will tell me, “Your father has died, your father is dead. He has died just now in Lahore Hospital, finished.”

So this word, if I unite this word with that real father of mine, that is bondage. If I leave it separately, what is that, what is there in it!

Father is dead, what is that?

SWAMIJI:  It is only letters; it is only the collection of letters.

JOHN:  So in other words, if somebody were to write you a letter, and that would to affect you; cause you to feel grief . . .

JOHN:  No, but if it caused you to feel grief, then that would be bondage.

When you write a letter to some of your friends that, “I am almost dying, I may die in two or three days, come soon,” he will arrange a plane and come. Although you are alive and you are hale and hearty, he will come. Lipikrama, by that character of letters you have given him a push to another world of grief or pleasure or sorrow.

DEVOTEE:  These two things are not there before that man; he is just like a lump of stone?

SWAMIJI:  No, when awareness is there.

DEVOTEE:  But he must have the awareness?

Ambā is the first energy, [the creator of obstacles]

These four energies are being kissed by that Matṛkā, by that Mother.

When she kisses the energy of Vāmā, this Vāmā śakti gives you the fruit of saṁsāra (repeated births and deaths).

When that universal Mother kisses the energy of Raudrī she will put you in a fix, “What to do . . . should I do this or should I do that?” She won’t let you do anything good or bad. That is the action of Raudrī.

When she kisses the energy of Jyeṣṭhā then you will rise to the knowledge of your own nature.

And when she kisses the energy of Ambā, then you will neither go down, nor up.

(not recited in full)

By kissing these four energies, antar abheda ānusaṁdhi-vandhyatvāt, you are deprived from your own real nature of universal consciousness. Kṣaṇamapi alabdha viśrāntīni, not even for one second are you situated in one-pointedness; bahir mukhānyeva jñānāni, so your organs of actions [karmendriyas] and organs of knowledge [jñānendriyas] lead you to bahir mukha state, to the external world, not the internal world.

So, these threefold malas are well said to be binding your own nature. This is explained in these two ślokas in Spanda.

When by sound you are carried away from your own nature, by hearing some sound good or bad.

Bas! we will do only this much today.