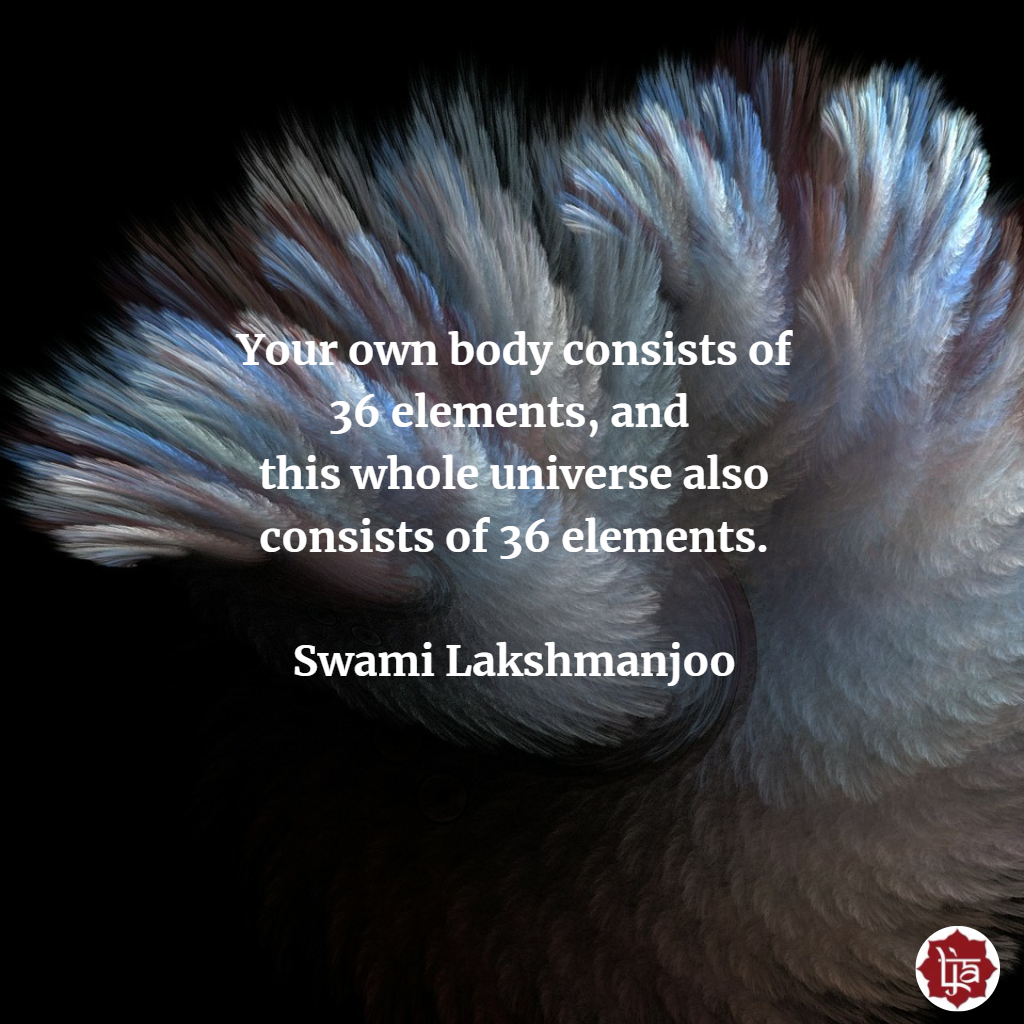 In the Vijñāna Bhairava, Bhairava sets out one hundred and twelve techniques of spiritual practice to be used by an aspirant eager to realize the divine universal reality. In this excerpt, Swami Lakshmanjoo explains practice on the thirty-six elements (tattvas).

This is Dhāraṇā 31, verse 54, of the one hundred and twelve techniques from the Manual for Self Realization: 112 Meditations of the Vijnana Bhairava Tantra.

. . . and, in this body, you must find out that the grossest element existing in your body has to touch its original state of its manifestation, wherefrom it has manifested.

Yānti nilayam, by this process, [the elements] become dissolved in one another.

JAGDISH: Is this śāktopāya, sir?

JAGDISH: So, “tattvāni” here are the thirty-six elements?

JAGDISH: Not the five states of the individual?

SWAMIJI: No, no, no, that is incorrect. I saw that written in that. It is [written that] the five states of the individual, i.e., jāgrat, svapna, suṣupti, etc.? No, that is not [correct].

* “The word “upāya” in Kashmir Shaivism is used to indicate the means to enter into Universal God Consciousness from individual consciousness. . . . It is important to realize that though there are different upāyas, all lead you to the state of one transcendental consciousness. The difference in these upāyas is that āṇavopāya will carry you in a long way, śāktopāya in a shorter way, and śāmbhavopāya in the shortest way. Although the ways are different, the point to be achieved is one.” Kashmir Shaivism–The Secret Supreme, Swami Lakshmanjoo, ed. John Hughes, (Universal Shaiva Fellowship).

189 The elements are listed in ascending order from the grossest to the subtlest, from the effect to its cause. Check out our online course on the 36 elements, Tattvas; The building blocks of creation in Kashmir Shaivism.

Source: Manual for Self Realization: 112 Meditations of the Vijnana Bhairava Tantra, by Swami Lakshmanjoo
All Content is subject to Copyright © John Hughes.