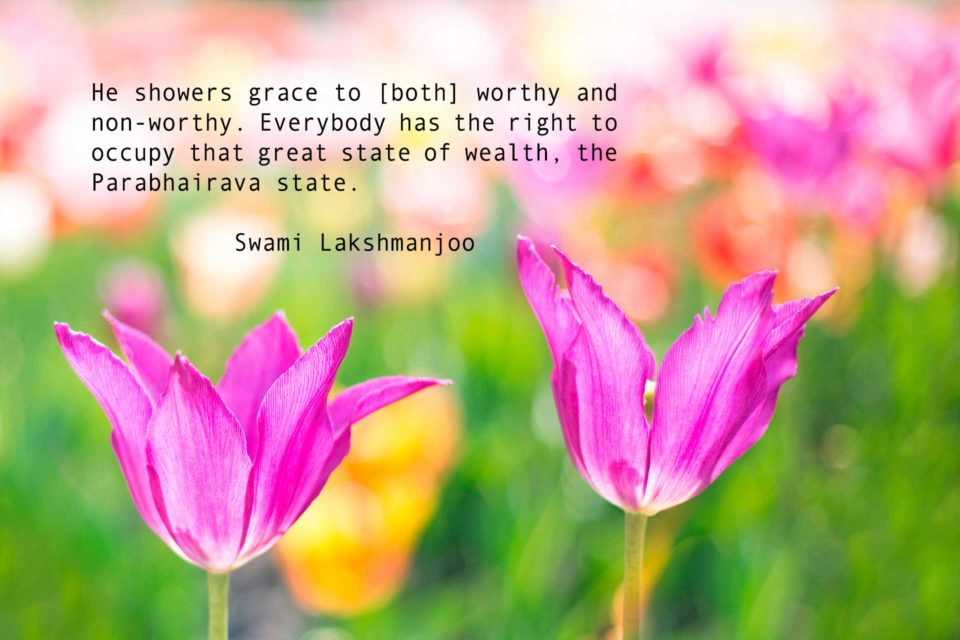 In this excerpt from the Bhagavad Gita, In the Light of Kashmir Shaivism Swami Lakshmanjoo tells a beautiful story to illustrate “How He showers grace to [both] worthy and non-worthy. Everybody has the right to occupy that great state of wealth, the Parabhairava state.”

And afterwards it happens, anichamāno’pi balād, without willing to do [something bad], I go on, I thrust into doing it [anyway]. Then after doing that, I repent, “what have I done?”

Who are these aspects? I have not understood who they are. There are two parties inside of me. One gives me encouragement to do [some action] and another party encourages me not to do [that action]. And in the long run, I do it, I commit that [action]. But after committing that [action], I repent, “why have I done this?”

Who is that person who has committed this and thrown me in this position?

Pāpaṁ pāpatayā vidannapi. If pāpa, a sinful act–I already know that a sinful act is already a sinful act [and that I] should not do it–somebody asks me to do it [saying], “do it. What is it to you? Do it. For your pleasure, do it!” And some other party comes and he says, “no, don’t do it, it is bad.”

Who is [making] this trouble?

It is just kāma (kāma is desire) and krodha (wrath). For instance, you have got kāma (kāma means desire), you want to have [some] thing. When you don’t get it, you struggle to [obtain it]. After great struggling and spending so much money–this is the [outcome of] desire for doing that, achieving that [object of desire]–when it does not take place, then wrath (krodha) encircles [you]. You don’t want to talk to anybody afterwards if it does not happen.

There was one prostitute; her name was Madhāllasa. Madhāllasa, she was the greatest prostitute. She was [well]-known and her fees were tremendous fees. In the meantime, Śukadeva, Vyāsa’s son, was passing on the roadside. He was going somewhere but he was tired. He was tired, he was brahmachari, he was filled with the Bhairava state of being.

JOHN: Compiler of this Gīta.

He was walking, he was just [passing by]. He had no desire for sex at all, from his very childhood. He didn’t know what sex was and he didn’t know anything about sexual intercourse. He had no knowledge of that. He was above that. He was residing in his own way in God consciousness. And he was a brahmachari, he was brilliant, he was shining just like Lord Śiva, and he was walking on the roadside. And this poor girl thought, “he wants to come to me.”

And she directed him from her window on the [side of the] market to come. He said, “all right, all right I’ll come.” He didn’t know what for he was called. And she lost interest in all of her friends, at once, as soon as he stepped into her bedroom.

And [with] whatever best bedding she had possessed [after] all of these years of doing this job, she decorated her bed for him to lie down. He stepped into that room and laid down, flat. He was tired. Then she wanted to press [i.e., massage] his legs. She pressed his legs with great reverence, with great love. She said, “he is my real friend. I don’t want any money from him. It is only this blissful state that I have received from him.” Then she pressed him for about one hour and a half and in the meantime any friend who came to see her with fees [saw that] she had locked from the inside all of the doors and windows.

SWAMIJI: She had locked [her doors and windows from the] inside, and she didn’t allow anybody to come inside. She wanted him only.

She thought that he is going to urinate or something and he will again return.

Then she opened the window and saw him passing, passing, and passing and passing until he disappeared altogether. He didn’t return afterwards at all and it took her [a long time to fall asleep]. It was eleven at night [when he left] and up to three or four a.m. in the morning, she was bas, thinking of him. And he didn’t return. When he didn’t return, then she went to sleep. As soon as she slept she went into a trance and became Parabhairava, she became one with Parabhairava. Then she was called the greatest devī residing in Parabhairava state. This was his grace.

So this is the grace, i.e., how He showers grace to [both] worthy and non-worthy. Everybody has the right to occupy that great state of wealth, the Parabhairava state. 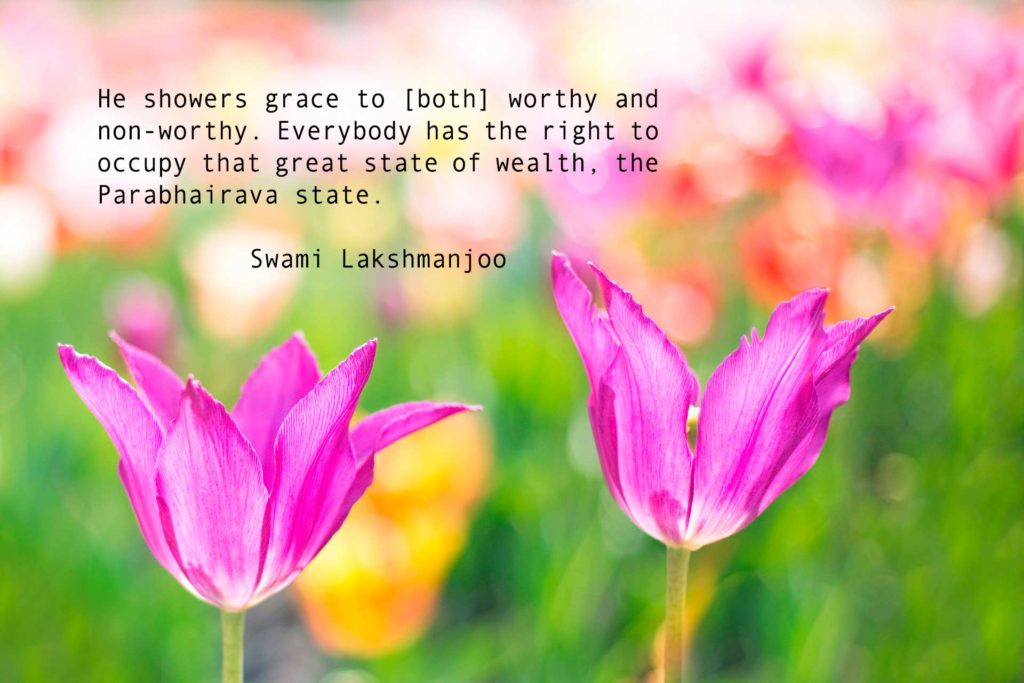 Source: Bhagavad Gita, In the Light of Kashmir Shaivism, by Swami Lakshmanjoo
All Content is subject to Copyright © John Hughes