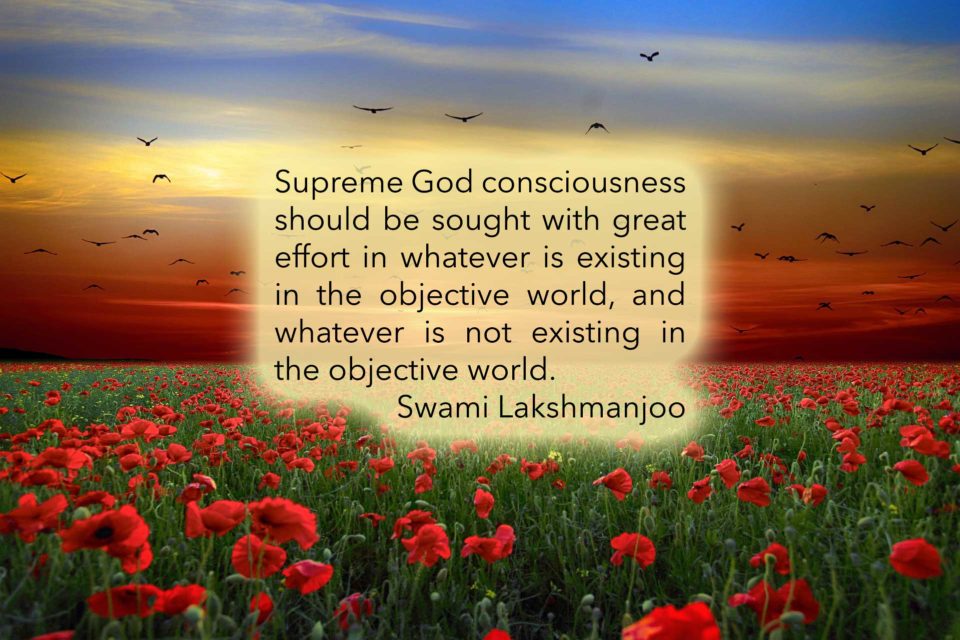 In this excerpt from the Shiva Sutras: The Supreme Awakening, Third Awakening, verse 24, Swami Lakshmanjoo explains how a yogi again rise in that supreme nature of the self after coming out of samādhi into the objective world.

When a yogī, in coming out from samādhi, also attempts to maintain awareness of God consciousness in the objective world, then, even though his real nature of self is destroyed by the inferior generation of self-consciousness, he again rise in that supreme nature of the self.

The expression from the sūtra, “When a yogī also attempts to maintain awareness of God consciousness in the objective world . . . ” is explained in the following two references:

Again, in the Svacchanda Tantra, it is said:

Due to God’s energy of māyā, the minds of yogīs are diverted by force towards worldly pleasures and away from God consciousness. But, in those masses of yogīs, there exists some great yogī who is fully aware of his self. His state of God consciousness is fully established and totally complete and his mind is never diverted toward worldly pleasures.

Another thing that happens to this yogī:

Whenever the mind flows out, he centers his consciousness on that one God consciousness. Because he feels the oneness of Śiva existing everywhere, if his mind moves here and there, even then it does not move at all because it moves in his own nature. Wherever he feels and experiences the existence of the objective world, he feels and experiences that the objective world is actually nothing but Śiva.