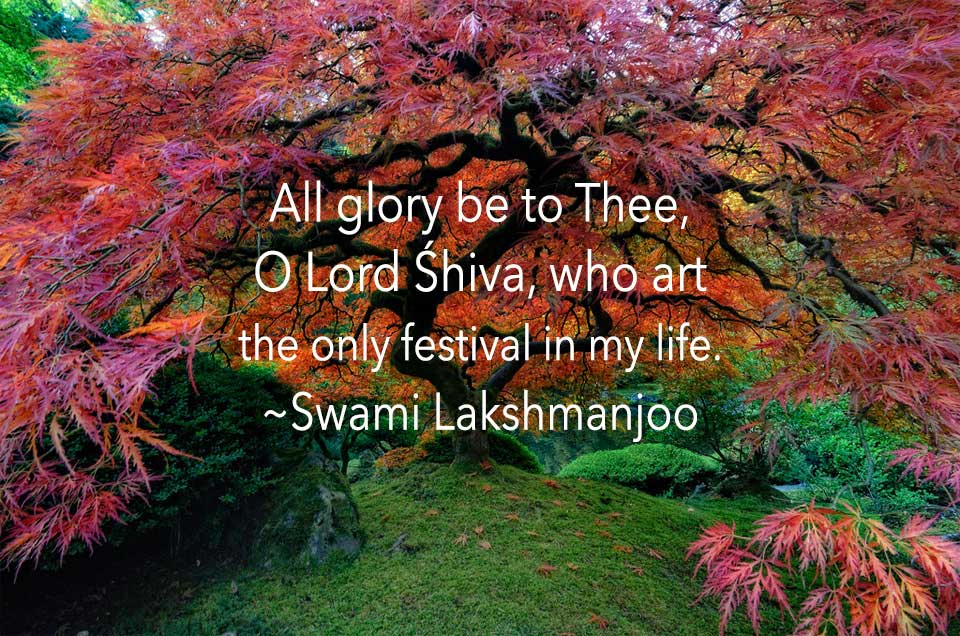 This is a beautiful excerpt from the devotional text of the Hymns to Shiva, Utpaladeva’s Shivastotravali, explained by Swami Lakshmanjoo. In which Utpaladeva asks Lord Shiva: “When that festival will appear to me?”

The Intensity of the Festival of Devotion by Utpaladeva is to get entry in universal God Consciousness.

SCHOLAR: Of the bliss of Your devotion.

When that festival will appear to me?

SCHOLAR: In this ālocana137 moment.

SWAMIJI: Yes. Pṛthak nāmāpi lapsyate, and when differentiated names and forms and speeches also will vanish for good.

SCHOLAR: So, that God-consciousness there is flowing up from that first moment of perception like a fountain?

136. “This starting point (prathamābhāsa) is found just at the beginning of any perception or thought, before it has become determinate.” Vijñāna Bhairava, The Manual for Self-Realization, revealed by Swami Lakshmanjoo, Universal Shaiva Fellowship, Los Angeles, 2007. Introduction xxvi.

137. In this instance “ālocana refers to the very first sensation of any perception before it reaches the state of knowledge.” Ibid, p92, fn138.