In this excerpt of Chapter 12 Verse 28 from the Hymns to Shiva, Utpaladeva’s Shivastotravali by Swami Lakshmanjoo, we find Utpaladeva proclaiming:

I will find You everywhere and

I will worship You everywhere.” 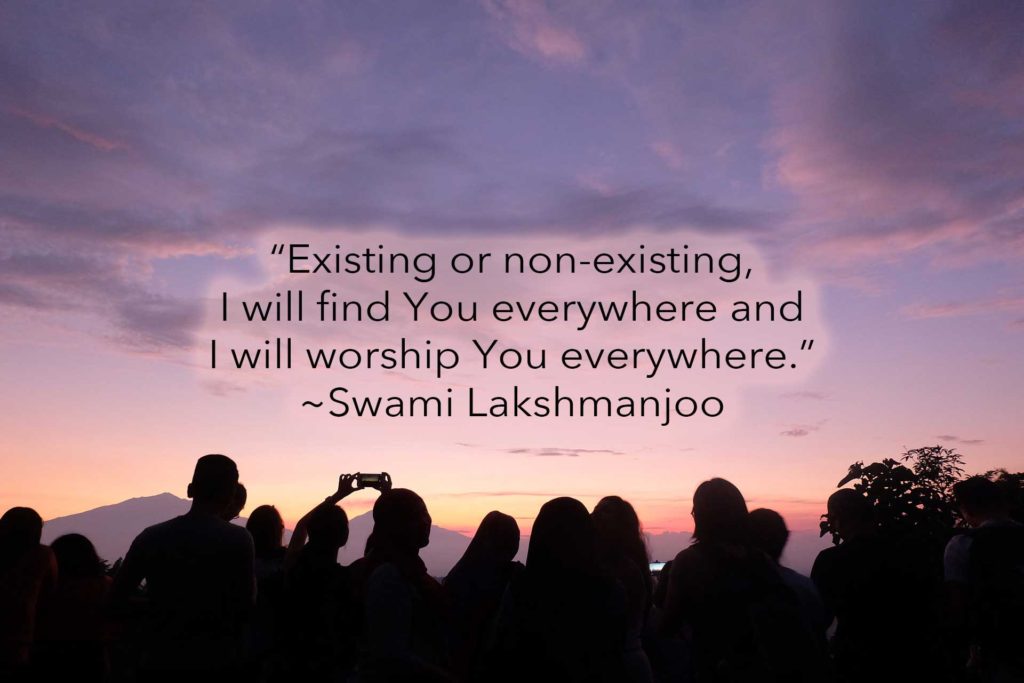 Bhāvā bhāvatayā, let the existent world be perceived by me just . . .

SCHOLAR As it is.

JOHN: I thought also non-existent world was one with You.

SWAMIJI: Yes, if you go into the depth of that understanding, then that non-existent world is also one with You.

But that which is not one with You, it is not there. The non-existent world means, e.g., not the milk of a bird.

SCHOLAR: Son of a barren woman.

SWAMIJI: That is also existing.

SCHOLAR: As an idea.

SWAMIJI: Yes. In mahāvyāpti, that is also existing.197

JOHN: In other words, what really is non-existent.

198 “Those of limited vision, however, in various parts are caused to identify themselves with the various [limited] stages by His will on account of which, even though when it is made clear that the essential reason of the erroneous concepts of the preceding experients lies in their identification with the body, etc., they are unable to comprehend the great pervasion [mahāvyāpti] (of the Ātman) described above (by Trika philosophy, viz., that the ātman is both immanent in the universe and transcends it) unless the Śakti of the Highest descend upon them (i.e. without the grace of the Highest Śakti).” Pratyabhijñāhṛdayam, The Secret of Self-Recognition, Sanskrit Text with English Translation, Notes and Introduction by Jaideva Singh (Motilal Banarsidass, Delhi, 1963-2011). Note: Jaideva Singh studied this text word-by-word with Swami Lakshmanjoo. The above quote on ‘mahāvyāpti’ appears in Kṣemarāja’s commentary of sūtra 8, p56.

199 Pūjita (he is worshiped) bhāvaikataḥ (by the oneness of our Being). [Editor’s note]