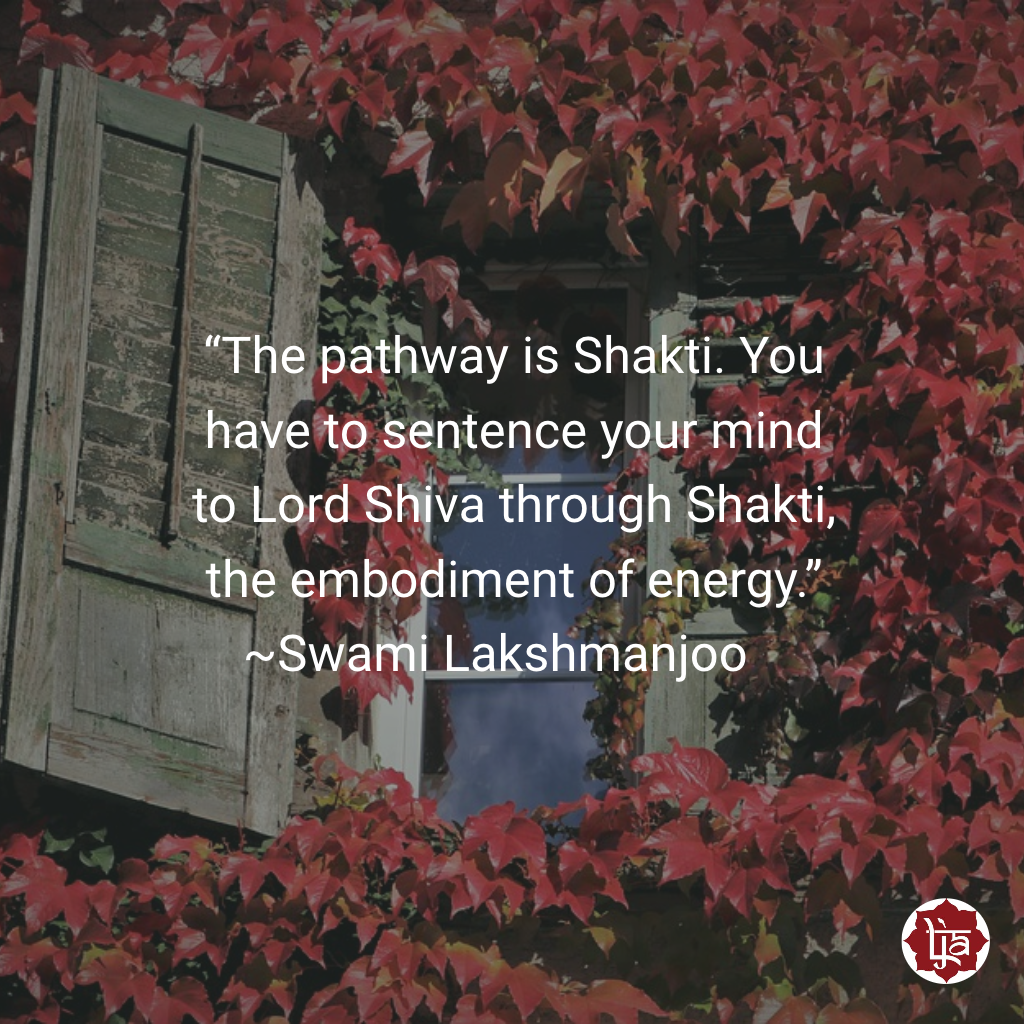 In this excerpt, Devi is asking: “O Lord, what is the real essence of the way we have to tread?” and Swami Lakshmanjoo is revealing to us what Lord Shiva’s answer is as he explains important concepts of Kashmir Shaivism.

This is an excerpt from the Vijnana Bhairava: The Manual for Self Realization, verses 2b – 4, revealed by Swami Lakshmanjoo.

O Lord, Deva, what is the real essence of the way we have to tread, kiṁ rūpaṁ tattvato deva? (This is one sentence, exclusive sentence.)

The nine states are:

The first state is prakṛiti. The original source of the material world is prakṛiti. Puruṣa is the individual soul who treads on that material world–this is the second. The third is kañcukas, five kañcukas, five coverings of puruṣa, five kañcukas (you have not to go in the depth of letters here); this is kañcuka–kalā, vidyā, rāga, kāla, and niyati7. Then the fourth point is māyā. Māyā is the personified will of supreme will.

When you keep before you the theory of words, then those words are respectively: h r kṣ m l v y ṇūṁ. These are navātma bheda from the mantric point of view8. You have to tread on this field of mantra, mantra field.

And [with regard to] states, [you must tread] the field of states from prakṛiti to Śiva and back to prakṛiti with his glory. When you tread from prakṛiti, you are not glorified; when you return from Śiva, you are glorified with garlands and with Shaivism and with Śiva–thought and everything–everything comes with you.

Is that the way? This is the asking of Devī.

Then bindu. One-pointed perception in the movement of breath while reciting this mantra aum–that is bindu.

Is this the way?

Vā, or, cakrārūḍham anackaṁ vā kiṁ vā śakti svarūpakam, or you have to travel on that universal energy which is moving in such a velocity that movelessness takes place–that is anackam. Anackam means “without movement.” Cakrā rūḍham means “in the wheel of movement.” Anackam, without movement. That energy, that svarūpa of energy, is that the way to make yourself established in that state?12

She puts these questions before Lord Śiva.

JOHN: There are so many words in Shaivism that have a different meaning than their ordinary meaning. Anacka means without vowels, literally, doesn’t it?

JOHN: And you have translated this as movement-less movement.

JOHN: Can you say to us why this is, why this word means movement-less?

SWAMIJI: Movement, because it is spanda [vibration]; movement-less, because there is no vikalpa, there is no thought.

JOHN: Yes, but why does the word anackam, which usually means no vowels, why is it in our Shaivism it means movement-less-ness?

SWAMIJI: For instance, you have to utter “ka”; for instance, for some time just say “ka”–you cannot utter “ka” if there is not “a” in the end.

JOHN: But you have translated this as movement-less wheel of movement?

SWAMIJI: Because there is no movement, you can’t utter it.

When you recite “ka” without “a” (it is just practice; it is just one-pointedness), it does not move in the outside circle of the uttered letters.

She has risen in the wheel. She is moving in the wheel, the śakti, but, in the movement also, she is not moving at all–that is anacka.

But it cannot be without movement because then it will be jaḍa [inert]; you will have to nominate it as jaḍa, just like a rock. It is not a rock. It is all-consciousness.

JOHN: And that’s what this is? This cakrārūḍham is to enter into the movement-less quality of letters?

SWAMIJI: Yes, cakrārūḍham means, in other words, [that] in all the mātṛikā cakra, you’ll find in each and every letter the same state, in the cycle of mātṛikā cakra.

SWAMIJI: It is immovable movement.

JAGDISH: So these cakras are mantras or other states?

SWAMIJI: Cakra mātṛikā cakra. Mātṛikā cakra is the collection of all letters from a to kṣa.

It is not ṣaṭ cakra here.15

JOHN: So she is saying, “Is the nature of śakti to be found in this?”

SWAMIJI: No. Śakti, first, the means. Śakti the pathway on which you have to tread. Because later on he will say śaivī mukham ihocyate16. Śaivī means śakti; mukham is the pathway.

It is said that the pathway is śakti.

You have to sentence your mind to Lord Śiva through that pathway–Pārvatī Śakti17 (not Pārvatī who is residing in Kailash).

JOHN: Oh, she wants to know what is the pathway in this cakrārūḍham, in this movement-less wheel of movement?

SWAMIJI: If she is cakrārūḍham, if she is anacka, or if she is only śakti, only energy, the embodiment of energy.18

This is the question of Devī.

9 Āgama means that which has come out from above, from the original source that is Śiva.

10 Triśirobhairava [Tantra]is [also] a Bhairava Āgama; so this will teach you the same course of the journey.

11 This [process] applies to every mantra; [aum] is just an example.

14 It is the intensity of movement in such velocity that it appears without movement.

Source: Vijnana Bhairava: The Manual for Self Realization revealed by Swami Lakshmanjoo.
All Content is subject to Copyright © John Hughes.