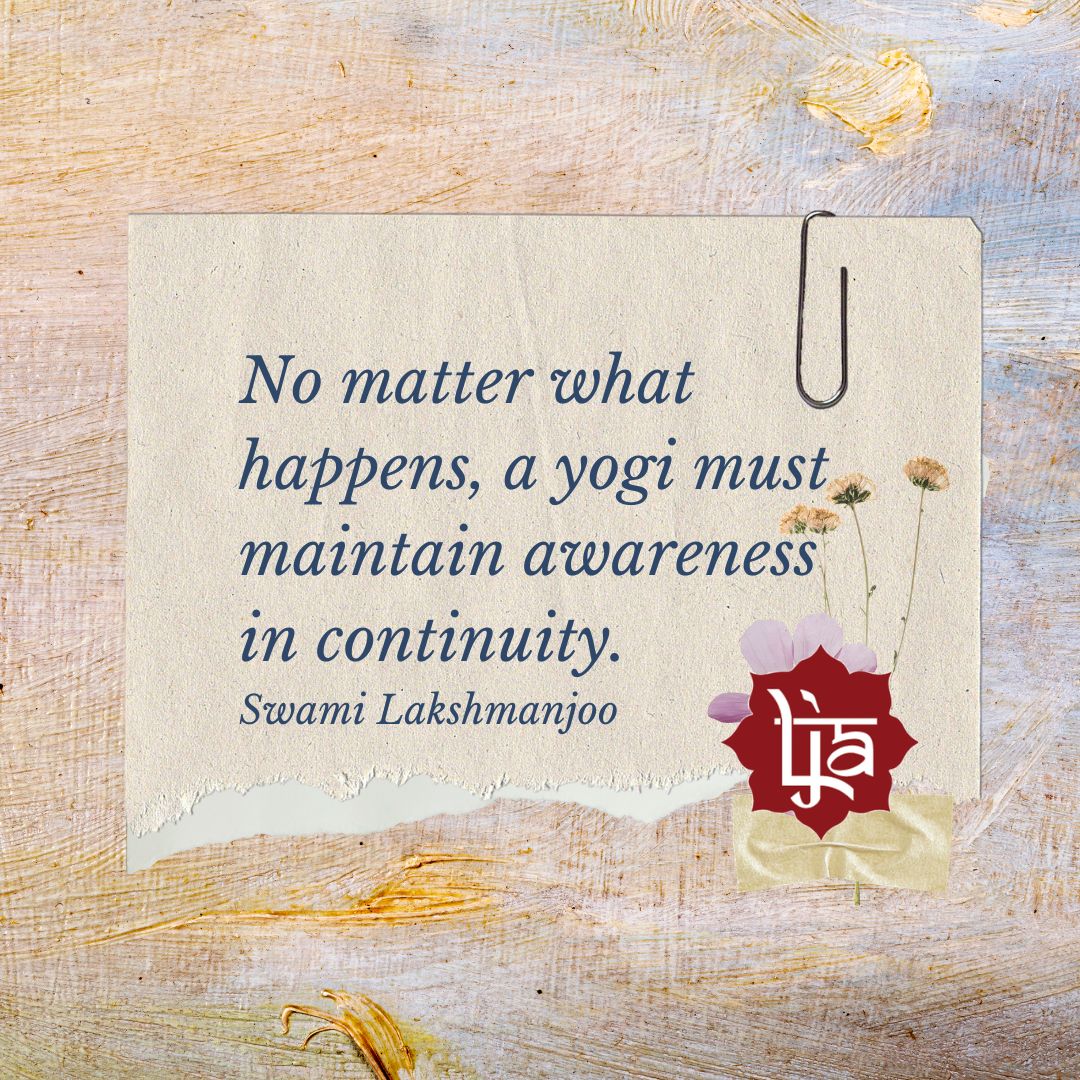 Today’s lecture is an excerpt from the book the Shiva Sutras: The Supreme Awakening, by Swami Lakshmanjoo (Shiva Sutras 2.10), where Swamiji answers the question: “why, when you are in samādhi and are unable to maintain awareness, do you enter the dreaming state rather than the waking state?” 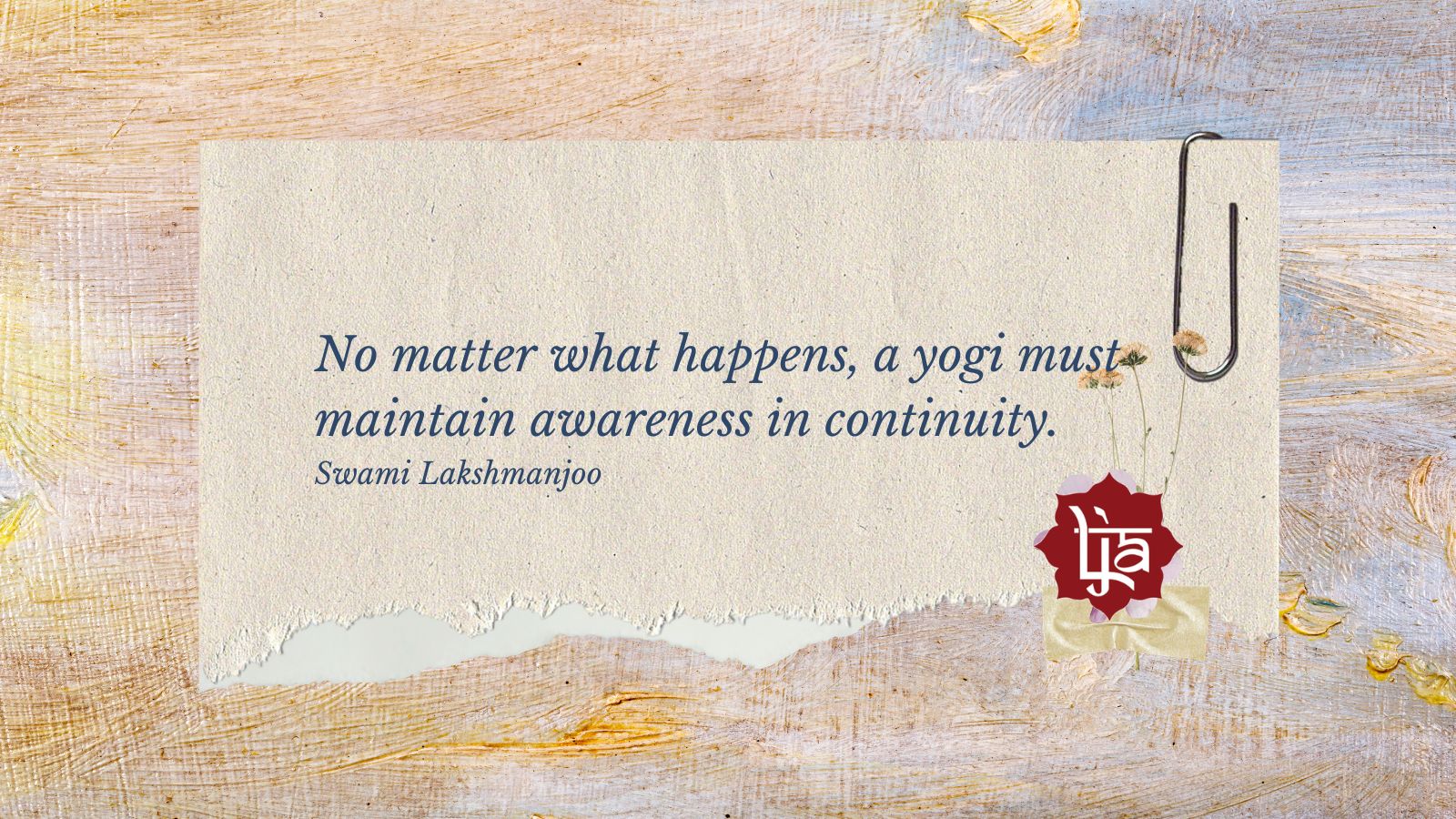 (The text below is from the book, it is not a transcript)

Although he is established in  God consciousness in samādhi,  yet not being able to maintain awareness, after a short time he enters into the dreaming state.

This is the meaning of this sūtra. When you have completely entered in samādhi and while in samādhi, you do not maintain your awareness wholeheartedly with great effort, then after a while you enter into the dreaming state. This happens to all yogīs. This losing awareness is the great crisis in the yogīc world. All yogīs generally experience this state of losing awareness. And when they do, they go to the dreaming state because that state is subtler than the waking state.

But the question is why, when you are in samādhi and are unable to maintain awareness, do you enter the dreaming state rather than the waking state?

And those yogīs who do not have much capacity or ability to meditate enter samādhi, not in the dreaming state, but in sound sleep. If they continue meditating, then after some time they will get entry into samādhi in the dreaming state. And when their awareness is further strengthened and developed, they will gain entry to samādhi through the waking state. Once you enter samādhi through the waking state, that samādhi becomes the most firm. So this is the reason why, when that supreme knowledge of God consciousness is weakened by the lack of awareness, you enter the dreaming state.

When, through meditating in continuity, your thought becomes ever more subtle, you will feel that you are about to go to sleep. Sleep comes for those who can not maintain awareness. Those who can maintain awareness do not fall asleep. They enter the gap, the junction of these two states of waking and dreaming. That junction is turya, the real state of being.

This is also said in Mālinīvijaya Tantra:

Hence, the fruit of this entry into God consciousness comes after an utmost struggle. And even if that state of reality has come nearer to your awareness, even then you cannot maintain awareness there. It is very difficult to touch it. As soon as you want to touch it, you become unaware. You lose awareness. Your connection of awareness is severed at once. Kśemarāja tells us that if this happens, you must understand that your master was not really happy with you when he initiated you. Therefore, you must ask your master to initiate you only when he is completely happy with you. You must not pressure your master to initiate you. By using pressure, nothing can be accomplished. This is the teaching of Kṣemarāja. I don’t necessarily agree with this point of view.

It is further stated in the Mālinīvijaya Tantra:

The yogī who does not maintain awareness at the time he achieves supreme yogīc powers becomes detached from the awareness of God consciousness. This yogī has diminished his power of moving forward and the obstacles of life toy with him. (Mālinīvijaya Tantra)

At the point when a yogī attains supreme yogīc powers, his awareness may be prevented from further achievement because of his being so filled with the enjoyment of these powers. For example, a yogī gains the power of flying in the air. If at that time, because he is overjoyed—so happy to have gained so much—he becomes detached from the awareness of God consciousness, then his awareness decreases and his power of going forward on the path is reduced. Having weakened his power of going forward, through the attainment of these yogic powers, all the obstacles of life play with him.

In Spanda, in this verse it is said:

The creative energy of Lord Śiva, becoming independent of that yogī who is lacking awareness, plays with him who now acts and experiences wakefulness and the dreaming state just like ordinary people. (Spanda Kārikā 3.3)

This yogī lacks awareness. He does not maintain the full awareness of God consciousness. Because of this, the creative energy of Lord Śiva, previously contingent on his maintaining awareness, becomes independent of him. This creative energy plays with him just like she does with ordinary people. In wakefulness, he does what worldly people do and in the dreaming state, he experiences what they experience. Now there is no difference between this yogī and the common person.

So no matter what happens, a yogi must maintain awareness in continuity. This is what we are being taught here.

This is said in Mālinī Vijaya Tantra:

Do not become attached to yogic powers, be detached from them. (Mālinī Vijaya Tantra)

In Spanda, it is also said:

The one who is always completely aware to apprehend the essence of spanda in each and every movement of life quickly gains entry in God consciousness in the very state of wakefulness. (Spanda Kārikā 1.21)

That means (upāya), wherein one, by meditating only with thought, gains entry in God consciousness, through maintaining awareness on an object of perception which can not be uttered, is called śāktopāya. (Mālinī Vijaya Tantra 2.22)

There are some yogīs who are treading on the path of śāktopāya who are unable to maintain awareness. For them, this last sūtra has been explained

When this yogī’s state of pure knowledge (śuddha vidyā) is destroyed by lack of awareness, he enters the dreaming state. At this point, his future is uncertain. God only knows what will happen to him. He has lost everything and from a yogīc point of view, he is a pauper.

So now, to aid this yogī, the author will explain the means called āṇavopāya whereby he can learn how, in time, he will be able to maintain awareness and thereby reach and secure entry into śāktopāya and, in the end, gain entry into śāṁbhavopāya.

This is the end of the Second Awakening.