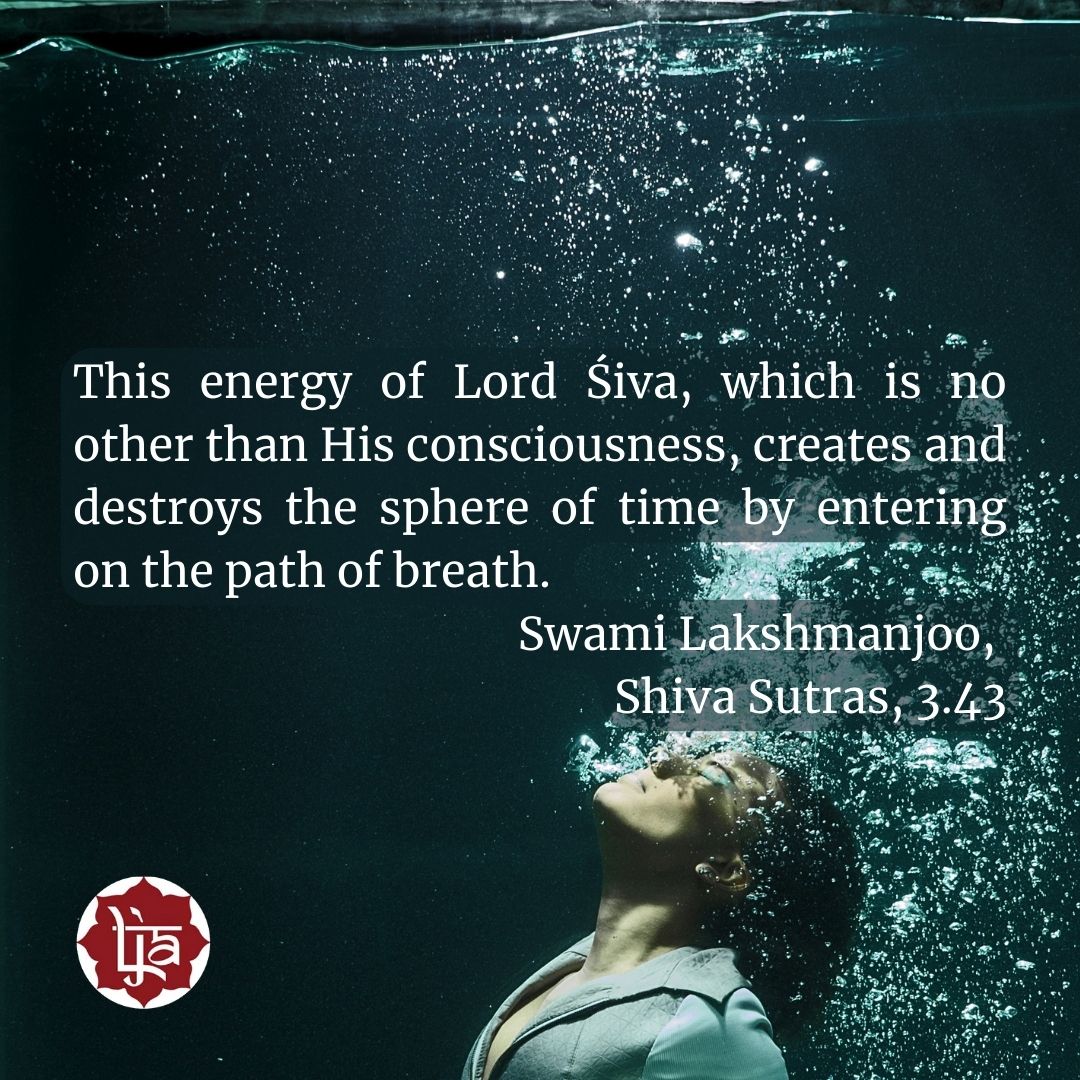 In this extract from the Shiva sutras 3.43, Swamiji explains “how the energy of Lord Śiva creates and destroys the sphere of time by entering on the path of breath.”

Swamiji also answers the question: “Why at the time of realizing one’s own reality of Being the yogi’s coverings (the six kañcukas) do not vanish there and then? Verses 44 and 45 go on to explain how ‘time’ is directly related to the different types of breath (prāṇa).

Now he argues, he puts a question.

To that he answers:

“This connection of breathing in and out is naisargika, this is his nature.”

Because it is already said by Kallaṭa that, “the first change of God consciousness takes place in breath.” So as long as his breathing is there, his body must be there to breathe. As soon as he has come down from the state of God consciousness, he has entered in the journey of breathing in and out; so he maintains this body of five elements.

This connection with breath has come by the nature of his svātantrya śakti, and that is explained in this word naisargika. Because whenever this supreme Goddess of consciousness intends to create this differentiated universe, She creates first limitation in Her being, and then She enters the state of breathless breath, the first breath – prāṇana.

This kind of breath is called prāṇana!

So in that breath She is transformed first. At the first movement that energy is transformed in this kind of breath – prāṇana. And then in breathing in and out, where she holds the state of grāhaka, limited being.

This is the second movement.

Then She enters in the objective field also.

So this is the glory of His svātantrya, or Her svātantrya, i.e., this attachment with breath which has appeared at first. 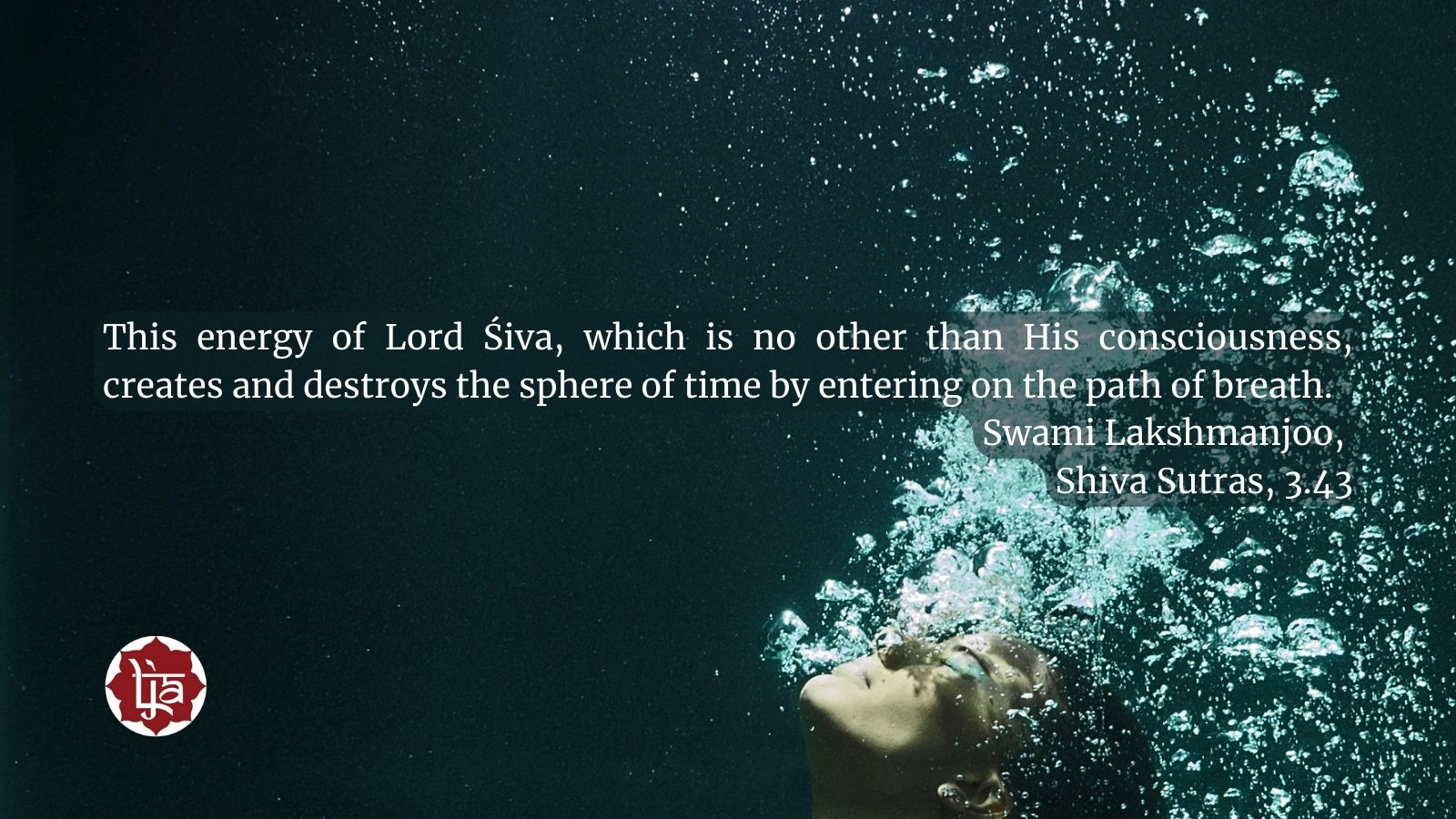 And then she carries three times, tristham: past, present and future.

So this conducting of creation and destruction is attributed to this breath. And this prāṇa, the second breath, is said to be ha-kāra, this ‘ha’ letter.

“The first change of God consciousness is that entering in that prāṇana; this is the first step towards manifestation.”

So, although he is breathing in and out, just like us, but actually, that yogi, who is always aware of that supreme state of that internal Being of consciousness in breathing also, he is beyond the state of ordinary people.

For instance, the left vein, the right vein, and the central vein; they are predominant in all seventy-two thousand veins; that is īḍa, piṅgalā and suṣumnā – vāma (left) nāḍī, dakṣiṇā (right) nāḍi, and madhya (central) nāḍī; and whose consciousness is centralized in the center of that internal consciousness, which is predominant in each and every being, this Being, who is Lord of Lords, who is one with supreme cognition, his supreme energy is only the energy of awareness, which is all-knowing, all-acting, and all-glorious.

So, for such a yogi he places forth the fruit of this yoga and ends this theory of Śiva Sūtras.

The one who has destroyed āṇavamala, māyīyamala and kārmamala, who has become absolutely pure, and whose all impurities are finished; for such a yogi, although he lives in the world of malas, but he does not get attached to them because he is absolutely pure.

The yogī feels . . . all impressions, differentiated impressions, are destroyed to him, and this whole world gets entry in his own nature. Then repeatedly again he feels that this universe has come out from God consciousness again afresh. This is what he feels.

The one who is situated in the supreme path of yoga.

So, by conducting this way of means – taking it out and carrying it back to your own nature – and repeatedly doing the same process; this process is meant for knowing this very state of Being.

There ends the Shiva Sutra Vimarśini.

Source: Excerpt from the transcript of the original audio files of the
Shiva Sutras: The Supreme Awakening revealed by Swami Lakshmanjoo