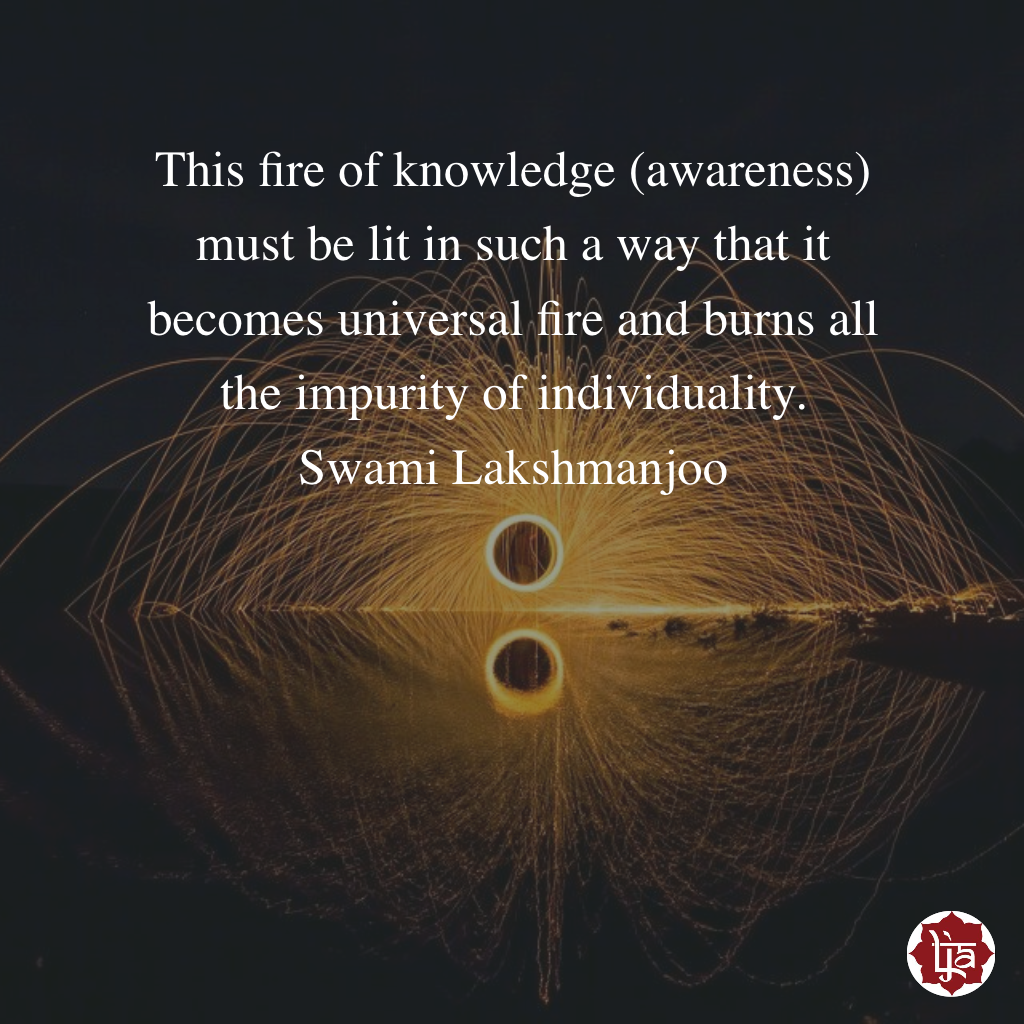 “You have to work out with all your might.
Don’t think of any other thing to be done in this world.”

Because everybody has the right to become Parabhairava.

This is from the Bhagavad Gita, In the Light of Kashmir Shaivism (Chapter 4 verses 36 till the end of chapter and summary). 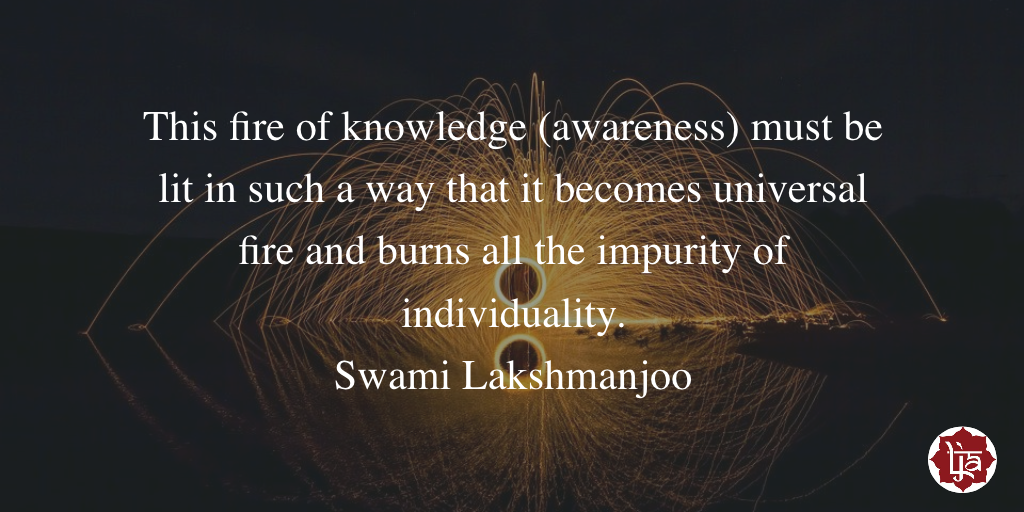 Pavitraṁ hi jñānasamaṁ nāsti, there is nothing purer than Parabhairava knowledge; there is no other element purer than this. This is the purest element.

What is the purest element?

Because everybody has the right to become Parabhairava.

What else he could have?

There is another śloka. There is the second [concluding] śloka.

Tasmāt, so, ajñāna sambhūtaṁ . . . samśayaṁ, the doubt, which you have created by ignorance, and which has made a place to live in your heart, that doubt,135 ātmananaḥ jñānāsinā, by your own knowledge (Parabhairava knowledge), is asi (asi means a hatchet), this doubt, chitva, you cut it into pieces. Yogamātiṣṭha, be united with Parabhairava state. Uttiṣṭha bhārata, fight with them and finish them! Whom?

SWAMIJI: Yes, Kauravas [laughs]. No, Kauravas. The Pāṇḍavās [should] go on fighting with them.

Now, [Abhinavagupta’s] conclusion of this.

131 These ślokas will collectively explain the meaning of akhilaṁ from the phrase “sarvaṁ karma akhilaṁ,” which appears in verse 4.33. Swamiji previously explained: “Where the kingdom of jñāna yajña shines, at that point all these yajñas end. They have no importance there; only importance is attributed to jñāna yajña only.” Abhinavagupta further explains in his commentary for verse 4.35. Swamiji translates: “sarvaṁ karmākhilaṁ, all knowledge, all action will end, will take its end. Nothing will be left to know, nothing will be left to do. Everything is done, everything is known then. And to clarify this point, [Abhinavagupta] clarifies this point in these ślokas and says, adds, prathama ślokena-adharmo ’pi naśyati, all actions–and not [specific] actions–good actions and bad actions also, adharmas and dharmas, both take its end. Neither dharma remains; [neither] good actions nor bad actions. Bad actions become glorified with awareness (i.e., jñāna yajña); good actions become glorified with awareness. Everything is divine then.” Ibid.

132 “This fire of knowledge, the fire of awareness must be lit, must be lit in such a way that it becomes universal fire [and] it burns all the impurity of individuality.” Ibid.

133 “In your brain, in your mind, in your organs, in your field of organs, you have to put faith. Jhagityeva āstikatvāt asaṁśayatve sati utpadyate, and that faith will rise only when you have surrendered everything to that awareness. Don’t put your understanding there. If you put your understanding, if you attribute your own understanding, e.g., “from my point of view, this is not right; from Mahesh’s point of view, this is not right . . . ” don’t put all these impure vibrations in it. Go on doing it, go on doing your meditation and you will rise to that kingdom of purity. . . . Tasmādasaṁśayavatā gurvāgamadṛte na bhāvyaṁ saṁsyasya sarvanāśaktvāt. You should doubt everything else with the exception of master and his technique for you. Only those two should be excluded from doubt. In all other things you should put doubt . . . because all other things are doubtful.” Ibid.

136 “So, you must do actions according to your own way, but only when you keep aside all your doubts. Keep away all your doubts and centralize yourself in meditation, and then you do your actions, good or bad. There is no question of being accused or being sinner afterwards.” Ibid.

137 “Whatever action you do according to the way of your organs, that action will become divine only when there is awareness. Go on doing your actions according to the nature of your organs, go on doing that. Go to movies, go to any disgusting thing you can do, but [do it] with awareness. When you are watching your breath, everything will be divine. Tenaiva śubhabhājaḥ syustṛptāḥ karaṇa devatāḥ. Your organs will just carry you towards that center of God consciousness.” Ibid.

Source: Bhagavad Gita, In the Light of Kashmir Shaivism, as revealed by Swami Lakshmanjoo