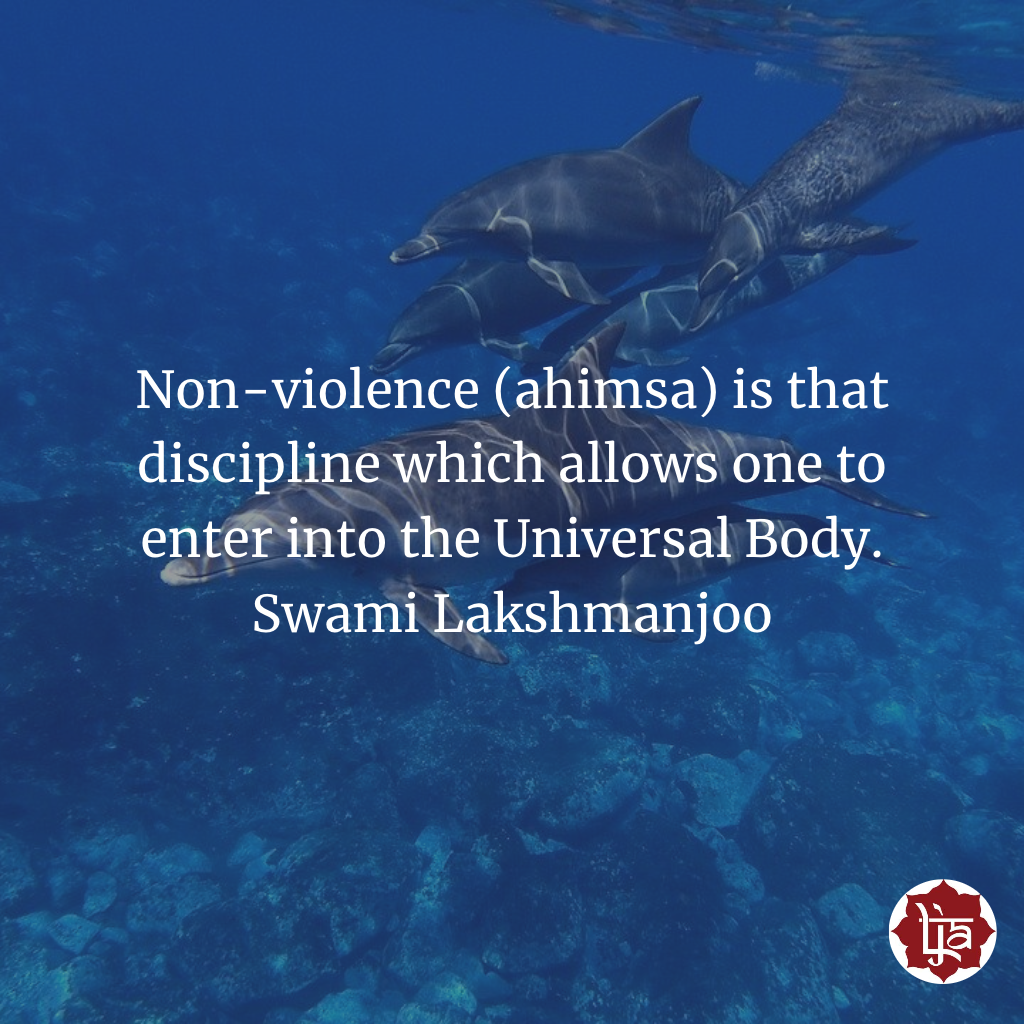 In this video excerpt, Swami Lakshmanjoo explains ahimsa (non-violence) in the light of Kashmir Shaivism emphasizing why non-violence (ahimsa) is the most important discipline to observe.

“You should first begin with ahimsa. It has a perfect order and there is a reason for that order: Non-violence precedes truthfulness. Without non-violence, you can’t have truthfulness. Only one thing should be noted:

Why should anybody be non-violent?

Because it is that discipline that allows one
to enter into the universal body!”

This is the last of the four-part series on the Divine Discipline in Yoga: Part 1 – Niyamas (observance), part 2 – Yamas (conduct), part 3 – Final goal in Kashmir Shaivism… a rare glimpse!, Part 4 – Ahimsa (non-violence)

Alice Christensen: We are in Srinagar, Kashmir, in Swamiji’s tea house in his ashram here. He is having a little problem with his throat today speaking, but he is still very interested in our subject. And what we are trying to do is continue our classes on the yamas and niyamas, which is mentioned in all of his books and all of the great books on yoga. It’s a very important discipline for our students. Without these, the student, really can’t progress. So, we made a list of questions for Swamiji and in some way, you will be able to hear him speak and I’ll try to help him in this talking, just so have a slight idea of what it’s like in my lessons in this tea house in India.

Alice: So, Swamiji, our first question was; this ahimsa…  When I taught my first class on truthfulness, you said, “No, you should not do that. You should first begin with ahimsa.”

Alice: I see. And down the line?

Swamiji: Only one thing, which should be noted.

Alice: Why should anybody be non-violence? And you said, “because it is that discipline [which] allows one to enter into the universal body.”

Swamiji: Once he has entered in universal body, then there is no . . . problem.

Alice: Then there is no problem with that.

Alice: So the person who is not realized, who is not entered into the universal body or thought or spirituality, then, has to be…

Alice: . . . extremely disciplined, non-violent, but once you make it, once you are realized . . .

Swamiji: That is all.

Swamiji: This is the secret of Shaivism.

Alice: This is the secret of Shaivism. I see. Because in all the books I have read, you know, the saints, the realized person…

Swamiji: They have not entered that point.

Alice: They have not come to that point. I see.

Swamiji: As existing in the example of my master, he was a meat eater.

Alice: Your master used to eat meat, and you said he didn’t like soap either. [Laughing]

Swamiji: He was non-violent and violent, both.

Alice: He was both.

Swamiji: Both were the same to him because there was nobody to question him why he was violent or why he was non-violent.

Alice: There was no question, not one, because he was in universal body.

Swamiji: Because his body is the body of Lord Shiva.

Alice: Swamiji, you know, a lot of people they say, “Well, I have been practicing…”

Swamiji: In case [for example] he puts before bird to give egg.

Swamiji: Right. He was non-violent, that first [bird], and in another way when cat came he was violent and caught [the bird]. It is sin. You should call it sin?

Alice: It’s changeable. It is whatever the play is.

Swamiji: It is a play. Everything becomes play for him.

Alice: Everything is play. That is very hard, you know. That’s a very hard conflict. In the Bhagavad Gita where Arjuna is standing there, and his guru Krishna, says to Arjuna, [who says:] “I can’t kill anybody. I don’t want to kill my family or anything like that.”

Swamiji: Arjuna is the individual body.

Alice: He is the individual body. And Krishna says, “go ahead and kill them.”

That’s bad. If a person practices yoga they must go through the discipline of non-violence first. They must do it first. And then Swamiji, how do you know when you have . . . [cut in video]

Alice: All right, let’s go to the next question.

Swamiji: You will message.

Swamiji: Because my drama is almost . . .

Alice: That really means, when you say, he is resigned . . . you knew then he has a different kind of consciousness than me or an ordinary person. Is that right?

Swamiji: I won’t say me.

Alice: I won’t say me. I will say the ordinary person. Because a person who suddenly walks in, like the milkman, they can’t see that. Can they?

Alice: Can it ever be seen, Swamiji, that state of consciousness, like your master had.

Swamiji: It was not to be seen,

Swamiji: No, just being, that.

Alice: Just to be. It’s never seen. It is never felt.

Swamiji: No, it is felt.

Alice: It is felt. Because I mean he [your master] was living in Srinagar, all these people must have been around him, they should have fallen on their faces. And Swamiji, right?

Alice: In front of your master. How were they going to recognize that?

Swamiji: They don’t recognize. They began to eat meat.

Swamiji: For me, it is something else.

Alice: For you, you are vegetarian.

Swamiji: I am vegetarian. I want to guide people. So you should also . . .

Alice: I am a vegetarian too.

Swamiji: Body and universe, in your body will be . . .

Alice: Then we will be one

Alice: Universal body. So when I stop teaching then universal body will come. Is that what you are saying to me?

Alice: Is that what you are saying, as we are getting very close here. I am beginning to understand that. So for instance, Swamiji, when you were a little boy and you were born you wouldn’t eat meat then? It is already born into your consciousness then that you didn’t want it.

Swamiji: I was traveling for so many lives . . .

Alice: Do you remember them?

Swamiji: In the background.

Alice: Way in the back of the unconscious.

Well, let’s stay here. If everything is Shiva then what notion is violence and non-violence?

Swamiji: That is to be realized.

Alice: To be realized, that’s the whole difference.

Swamiji: And realization then whatever you are doing is fine.

Alice: Whatever you do is fine because then you are . . . that for. Right, Swamiji? The force moves through you. Many people will think they have that and make the wrong move.

Swamiji: No, you should realize first. It’s for the realized.

Alice: When you are realized Swamiji, how old were you?

Swamiji: I didn’t realize anything. [Laughing]

Alice: You didn’t realize anything. Aha! Now, we are getting you here. [Laughing]. Because then Swamiji did . . .

Alice: The realization was already with you when you were born. Is that true?

Alice: I see. So you never had the problem of that at all.

Swamiji: I do that now and then.

Alice: I can’t remember. But this Shiva, if everything is Shiva, that is easy to say but it is very hard to understand.

Swamiji: And to realize.

Alice: It’s very hard to realize what that is. A lot of people think that that’s a religious saying.

Swamiji: No, it is not just saying, it must become [realized].

Alice: It is not just to say it. You have to become it. It’s a state of being.

Swamiji: Being and becoming, they are two stages.

Swamiji: It is the reality but you have to become.

Alice: You have to become the being, is where we are.

Alice: That’s why we are born.

Swamiji: We are born for that reason exactly.

Alice: And Swamiji, do you know, do you believe that we are born again and again until we finally become it?

Swamiji: I believe that.

Alice: You never leave it then. So many people, you know, they think that they are practicing yoga. Actually yoga is practicing on them. Isn’t that true?

Alice: That is really true. Okay. Now it says here; if you are no-violent does it mean that you don’t get angry? [Laughing] No, it doesn’t, does it? Now, I think we really met Swamiji.

Swamiji: [Laughing] This anger you would have found, you must have found in your master.

Alice: Yes, Rama. Rama used to get so mad. Blood vessels . . . and he’d stomp around on anybody, and everybody was always afraid he was going to kill me. [Laughing].

Swamiji: But that is only misleading, it is not heart, only lips.

Alice: It is only from lips. Actually his state of Being never changes.

Alice: Well, you are talking so well.

Swamiji: No I won’t

Alice: Okay, I won’t. Anyway, I can see what you mean. He was the same.

Swamiji: No, he has got control on all the gūṇas

Alice: He has got the control.

Alice: So, he can create. So, when he is just yelling and screaming mad . . .

Swamiji: He has created it.