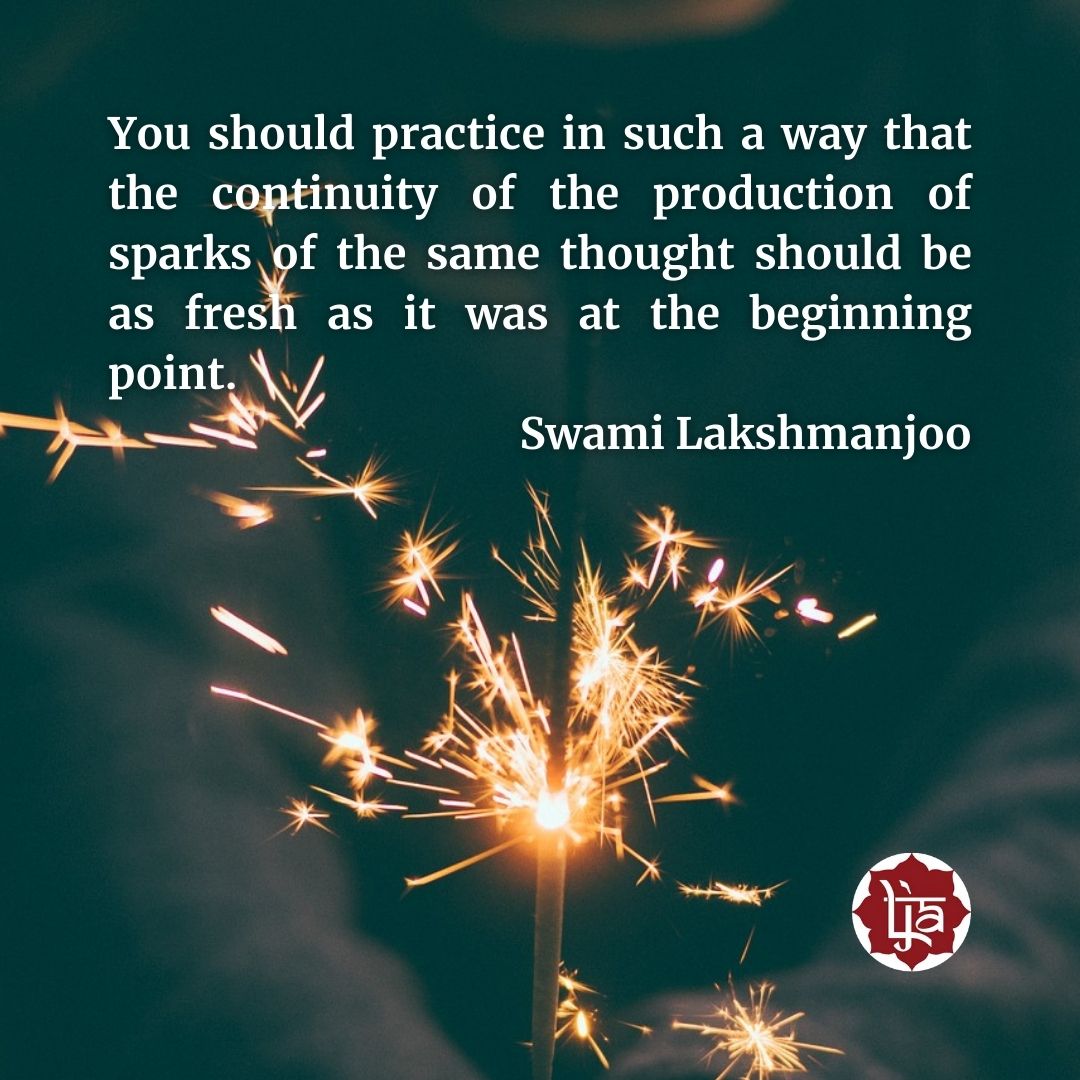 In today’s excerpt, Swamiji explains the most important ingredient to meditation. This is from Tantraloka Chapter 11 verse 81, from the Archives of the Lakshmanjoo Academy, recorded by John Hughes. All Content is subject to Copyright © John Hughes. 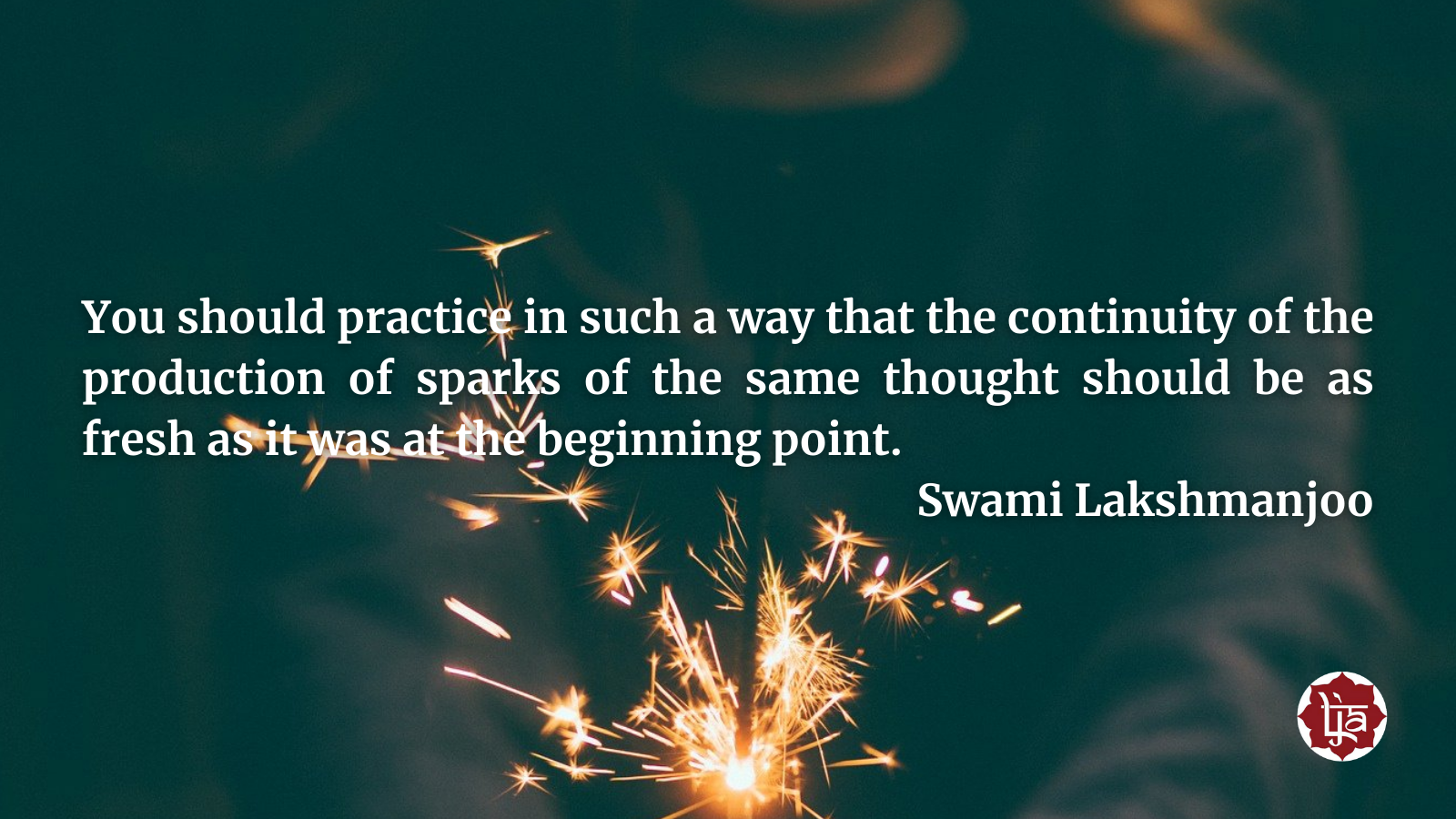 “You should practice in such a way that the continuity of the production of sparks of the same thought should be as fresh as it was at the beginning point.”   ~Swami Lakshmanjoo     (Image by Pexels)

JOHN:  That means meditating with awareness.

SWAMIJI:  Meditating with awareness in each and every spark . . .

JOHN:  Each and every moment.

SWAMIJI:  . . . because there are sparks. When you meditate you have not to put one mind for meditation, “oṁ namaḥ śivāya.”

JOHN:  You mean you must have your attention.

JOHN:  You must be aware during meditation.

SWAMIJI:  . . . it becomes faded. It fades and fades afterwards.

SWAMIJI:  . . . then you go to sleep afterwards. So this happens.

That is what he says, in Mālinīvijaya Tantra Lord Śiva has said; tena guptena tena, when it is locked, when it is subsided, when it is covered by other thoughts, other subsided thoughts, tena guptā, that pramiti bhāva is subsided, it subsides by and by; śeṣā varṇā then afterwards there are only letters and words and sentences.

SWAMIJI:  There is no meaning. It is meaningless.

BRUCE P:  But can’t you carry pramiti bhāva along with all those thoughts?

SWAMIJI:  When you develop strength; you have to be alert.

ERNIE:  Then it doesn’t matter what thought you have?

ERNIE:  You can have any thought if you have the strength?

Any thought will take you to the state of God consciousness; but there must be one thought and this first fresh thought, like that, in all the cycles of thought.

JOHN:  Then why do we use mantras? If any thought will carry you, why use special thoughts?

SWAMIJI:  Speciality, that does not count, special thoughts only we produce in the beginning in disciples. Afterwards, when they have developed this strength of awareness of pramiti bhāva then it does not matter. You can give rise to any thought, any disgusted thought.

SWAMIJI:  An apple, anything, and it will carry you to God consciousness.

It is said in the same Mālinīvijaya tantra:

You can do [it with] any topic, just discuss some points of your business, but there, if you maintain awareness and pramiti bhāva you will rise to God consciousness. You will not rise, you have not to rise; you’ll get establishment in that.

JOHN:  So this strength of maintaining this spark in continuity, that means having that break-less awareness.

JOHN:  Where it doesn’t move to another thought.

Source: Tantraloka Chapter 11 verse 81, from the Archives of the Lakshmanjoo Academy recorded by John Hughes
All Content is subject to Copyright © John Hughes.