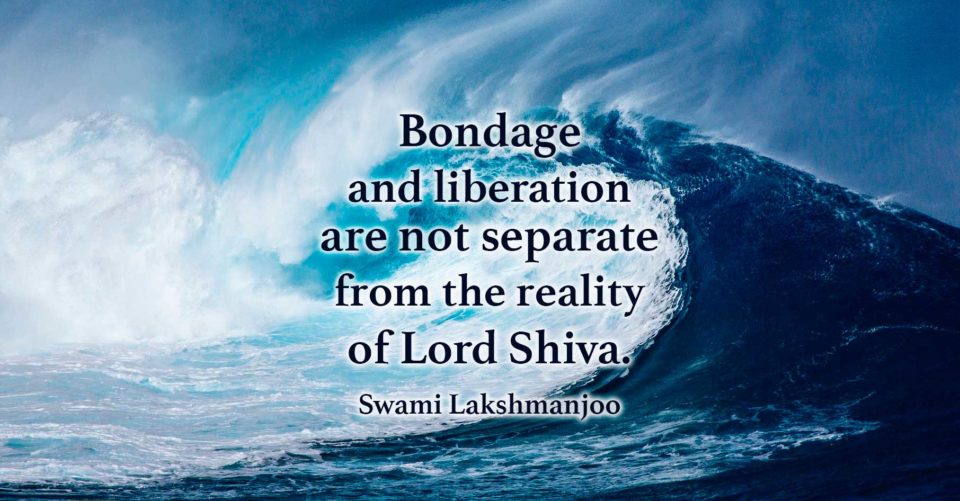 Here Swami Lakshmanjoo reveals that bondage and liberation are not separate from the reality of Lord Śiva. And why this theory of Shaivism is misunderstood. This is a continuation of a previous lecture on the Bodhapañcadaśikā [15 verses of wisdom] by Abhinavagupta, in which it says…

Bondage and Liberation are not separate from the reality of Lord Shiva. ~Swami Lakshmanjoo 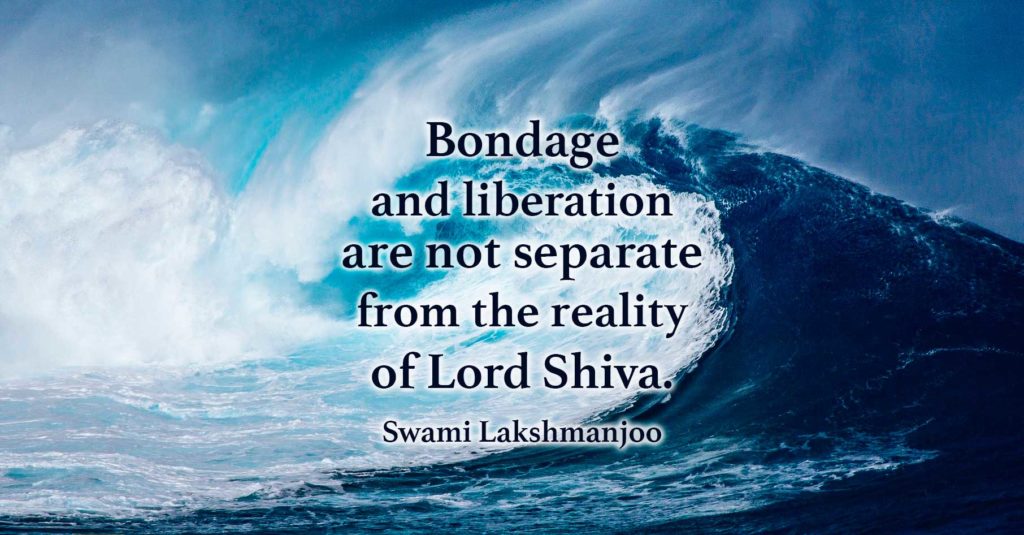 Do you understand what I mean?

Etau bandha vimokṣau ca, but in brief words, in exact words, these two cycles of bondage and liberation, parameśa svarūpataḥ na bhidyete, they are not separate from Lord Śiva, both cycles.

Both cycles are not separated from Lord Śiva.

Etau bandha vimokṣau ca parameśa svarūpataḥ na bhidyete, they are not different from the reality of Lord Śiva. Na bhedo hi tattvataḥ, because differentiated states have not risen at all. It is only a trick that you are ignorant and somebody else is elevated.

SWAMIJI: His trick or your trick?

SWAMIJI: Yes, it is your trick. If it would have not been your trick, how could you be liberated?

SWAMIJI: No, if you’re ignorant, for instance you are ignorant . . .

ERNIE: Is that a trick?

SWAMIJI: It is your own trick, that you have become ignorant.

DENISE: We fool ourselves.

BRUCE P: Because you have done it yourself, to see yourself.

SWAMIJI: You have done yourself to become slave, you can again . . .

SWAMIJI: . . . un-slave yourself and become king.

ERNIE: Or trick yourself in another way?

SWAMIJI: Yes, in another way.

From which point will he be elevated?

Was he not elevated before?

Why this word elevation?

Elevation is meant for those who are sunk, who are sinking down. If you have never sunk down, what for, what is the fun in elevating yourself. You are already elevated and divine.

But you must come to understand this. This is the difference, because it is misunderstood by many people. This theory of Shaivism is misunderstood and you begin to [imagine you have] become Śiva.

And this misunderstanding also too . . .

ERNIE: Is a trick!

SWAMIJI: . . . is found in the divinity of Lord Śiva.

ERNIE: But, what is misunderstood about Shaivism, in this point?

SWAMIJI: No misunderstood that, “I am Śiva.”

ERNIE: Yes, I don’t understand that?

SWAMIJI: . . . you don’t understand that you are Śiva. [So] you are not Śiva! But according to the theory of Shaivism you are Śiva. Then you come to this [false] conclusion that, “you are Śiva!”

ERNIE: Where is the misunderstanding?

SWAMIJI: Because you are not actually Śiva, you have not achieved that state.

SWAMIJI: No, if you have not actually realized Śiva.

DENISE: You shouldn’t go around thinking that you are Śiva. Is that right?

SWAMIJI: If you tell anybody, it means that you are not Lord Śiva.

You know what happens to this India, and Kashmir?

ERNIE: So if you don’t announce, but let us say you keep it secret to yourself?

SWAMIJI: No, you must understand. You must actually understand it. Not till then . . . till then it is all a joke.

ERNIE: No, but I am trying to figure out how does one know?

SWAMIJI: You will come to know yourself. Because you will be blissful, you will be always blissful.

BRUCE P: In pain you will be blissful?

SWAMIJI: In pain also you will be peaceful. And you must come to know and you have to see it for yourself, you have to see within yourself, ‘that you are situated in this way.’ If you are not situated in this way and say that, ‘I am Lord Śiva, I am Lord Śiva’, someone will slap you and make you understand that you are not Lord Śiva, you are just . . . with one slap.

ERNIE: This is a big problem?

SWAMIJI: This is a big problem. And you have to find out yourself, where you are situated.

ERNIE: Or with masters guidance?