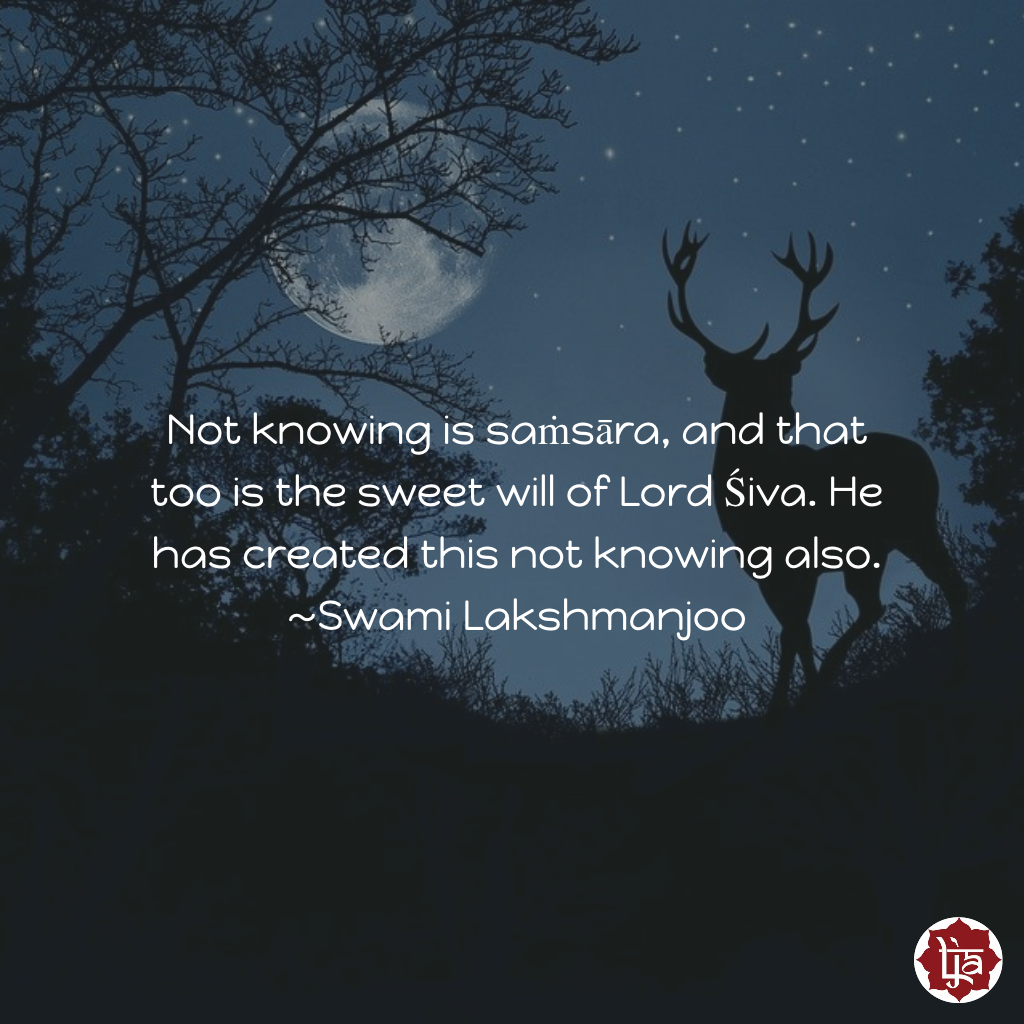 In this excerpt, Swami Lakshmanjoo tells us that through ‘not knowing’ one is caught in the cycle of worldly existence (saṁsāra) and that too is the free will of Lord Shiva.

This is the 11th verse and a continuation of the previous lecture on the Bodhapañcadaśikā by Abhinavagupta, which was about time.

Yadetasya aparijñānam. Now if we don’t understand like this, i.e. that this is only a trick, there is no time, actually, there is no span of time, it (only) appears like that. And if it were correct, then there would not have happened this difference . . . the difference of time. Only your one day is equal to 100 years of a mosquito. In one days time he is created, he protects, he does everything of his own, and he is destroyed.

ERNIE: [Then] 24 hours would be the same for everybody?

That not knowing, not knowing in that way is saṁsāra, this existence of the world.

BRUCE P: Not knowing that they don’t know?

BRUCE P: They feel that they don’t know?

BRUCE P: Then what terrifies them?

SWAMIJI: Pure ignorance. Not knowing that they are ignorant.

BRUCE P: How do they know that they are ignorant?

That not knowing, that is saṁsāra, and that too is the sweet will or svātantrya of Lord Śiva. He has created this not knowing also.

And this not knowing terrifies those who are ignorant. They are caught in that grip, they cry.

18  In the state of Śiva ( Paramaśiva) there is no time. The concept of time only starts with the creation of Sadāśiva.

19  Saṁsāra – in the cycle of worldly existence.

Source: The Bodhapañcadaśikā, Abhinavagupta’s “Fifteen Verses of Wisdom” featuring Swami Lakshmanjoo’s revelation (along with discussion and questions and answers by his closest devotees) is available as a six-part online study series: “Kashmir Shaivism and the Transformation of Life“. Includes a 127-page transcript in PDF format, with downloadable video and audio material (8 hours).