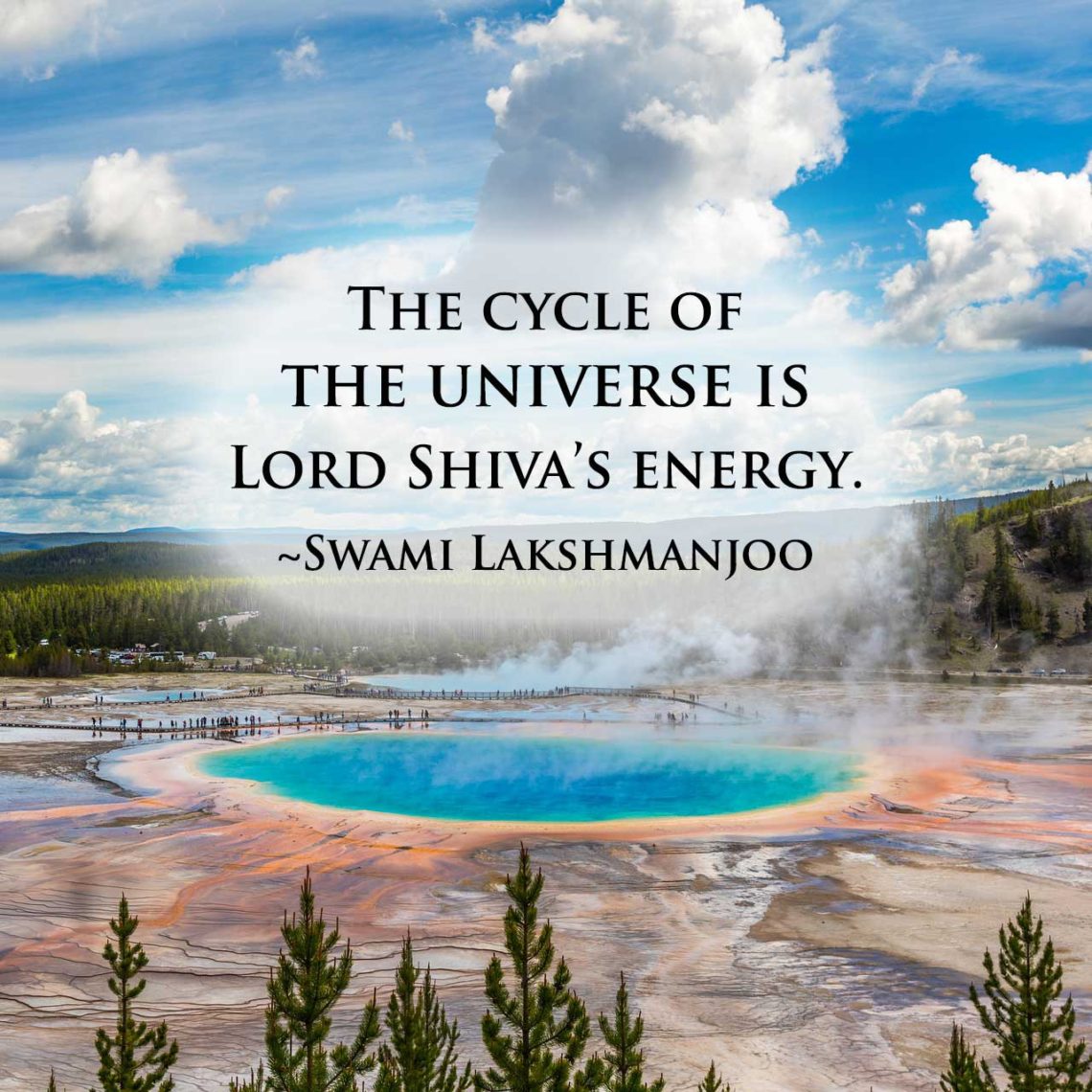 Swamiji explains to us how and why Lord Shiva disconnects Himself from His energy and yet is never disconnected from it at the same time.

This is from the Bodhapañcadaśikā by Abhinavagupta, who wrote the “15 verses of wisdom” for ‘those dear devotees who are not intellectually inclined”.

This part is starting with verse 6 till verse 8. You can review the previous verse here. 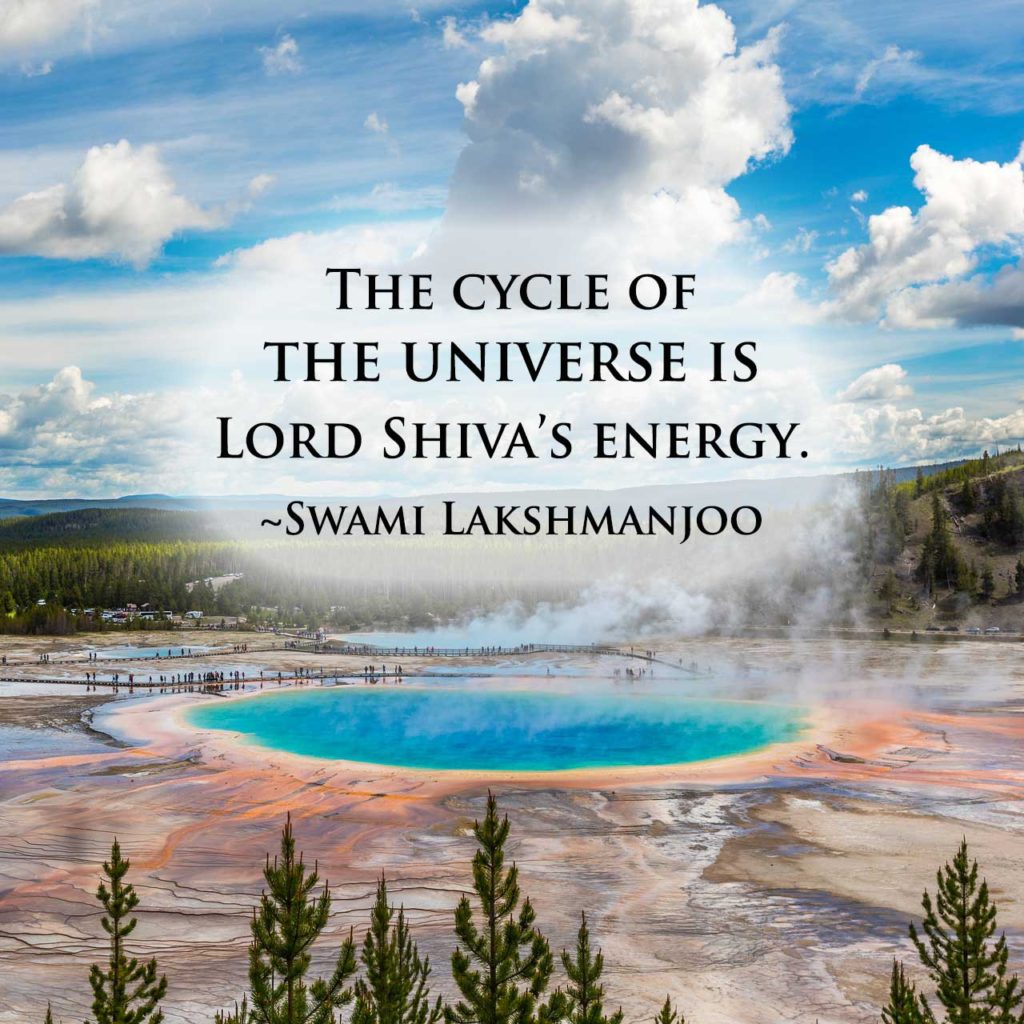 Look at Viresh, when he is too much excited he jumps, he hits his head. In the same way God has done this. He has crushed his own nature because of too much of ecstasy. He wants to disconnect that ecstasy. But that ecstasy in its real way cannot be disconnected at all. He knows that. But still for fun he disconnects this for the time being. And at the time of again realizing his own nature he feels that it was already there.

SWAMIJI: The purpose is to see that God Consciousness is also there.

And he creates it yugapat, simultaneously, he does not create this in succession.10

This, atidurghaṭakāritā, this can be done, this kind of action cannot be indulged by any other power in this universe. Only Lord Śiva can do this. Lord Śiva can just ignore his own nature totally, altogether, by his own svātantrya [independent freedom]. And although he knows that if he totally ignores that; see a rock, see in a rock, where is the existence of Lord Śiva? In rock there is nothing, it is just a rock.

BRUCE P: That is what he sees?

And it is a supreme way of acting. This kind of drama is a super-drama. It is not drama . . . [for example] you can play parts, but with life, you cannot play the part of a rock . . . can you play that?

SWAMIJI: He [Lord Śiva] can become a rock. He can become such a thing, that there is absolutely absence of complete consciousness.

Now, on the contrary, that state of consciousness which can play a part only in an individual way . . .

So in this way he spreads his nature, he expands his own nature. But jaḍa, on the contrary that person who is jaḍa [inert] he cannot, if he lives in such and such place he cannot live . . .

SWAMIJI: . . . simultaneously in another place. If you are living in Kashmir, nobody will experience your existence in the United States, at that very moment. When you go there, you will ignore the existence of [being] here. This is not found in God Consciousness. God Consciousness is everywhere in each and every way, all the time, in present, past and future. He is unlimited.

What is the translation of jaḍa?

BRUCE P: But he has created that. A rock is the creation of God?

When it is only rock [jaḍa, limited], then it is a rock.

So, when this kind of cognition is surviving, then this is the survival state of God, i.e. God not rock. A rock is then a rock when it is only a rock, paricchinna prakāśatvam; paricchinna, that is the limited state of being is jaḍa [inert]. Jaḍāt vilakṣaṇo bodha, this bodha, the possessor of svātantrya is bodha, he is absolutely vilakṣaṇa.

SWAMIJI: Indifferent from that jaḍa.

BRUCE P: But, that is his play though. That’s why he has created differentiation.

SWAMIJI: That is [his] play. And in this play he has played this kind of trick also at the same time, an adjusted trick, that rock has become only a rock.

BRUCE P: Then what use is that rock to him?

SWAMIJI: No he enjoys, he enjoys the state of rock, individually and universally also . . . he enjoys. But the rock does not enjoy. The rock itself does not enjoy, because it is limited. This is a two way existence, i.e. ignorance and knowledge. When there is knowledge, a rock is not only a rock then, rock is universal, a rock is rock also, a rock is Denise also, Stephanie also everybody, rock is an almirah (cupboard) also – in that way.

When a rock is [only] rock, just ignorant; then it is a rock and nothing else. It is limited, crying, in crises, screaming, yelling, sad, not satisfied.

But at the same time God is satisfied in a rock.

This is the reality of Kashmir Shaivism as explained by Abhinavagupta.

10. Lord Śiva creates and destroys this universe simultaneous (yugapat). In the previous verse the  expansion and contractions (unmeṣa and nimeṣa) equates with the principal of spanda (vibrationless vibration) in Kashmir Shaivism.

“It is concluded, therefore, that the supreme reality of Śāṅkara’s (Lord Śiva–Paramaśiva) consciousness is that it is in a state of movement (spanda). It is not fixed or situated in any one place. It is located everywhere. Wherever there is space, it is there. Wherever there is not space, it is there. It is in space and beyond it.” Swami Lakshmanjoo, Shiva Sutra – The Supreme Awakening, chapter 1, page 17.

“Take one thought. Contemplate on that one thought with unwavering concentration. Then, when another movement rises in your mind from that first thought, that is spanda and that is unmeṣa. You have to observe it yourself and that will be spanda.” (Spanda Kārikā 3.9) Ibid., 1, 31.

11. In Kashmir Shaivism, Brahma, Viṣṇu and Rūdra (Śiva) are not the same as the Trimurti of Hindu Mythology, where they are respectively referred to as the creator, preserver and destroyer. 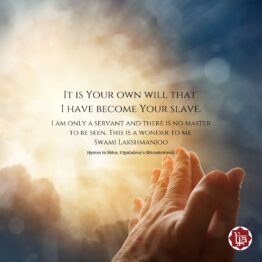 In this excerpt from the Hymns to Shiva, Utpaladeva’s Shivastotravali, Swami Lakshmanjoo explains Utpaladeva’s wonder…