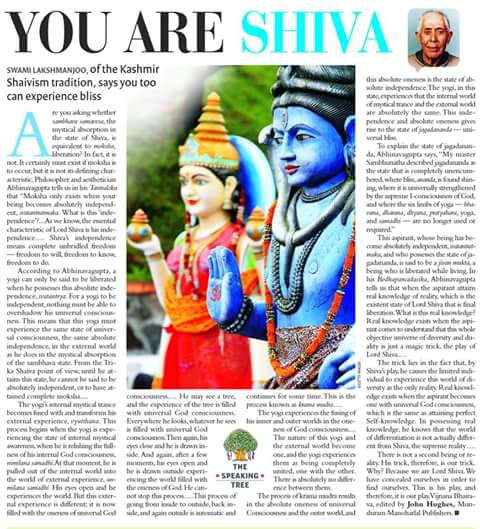 Article from “The Speaking Tree” by John Hughes….. 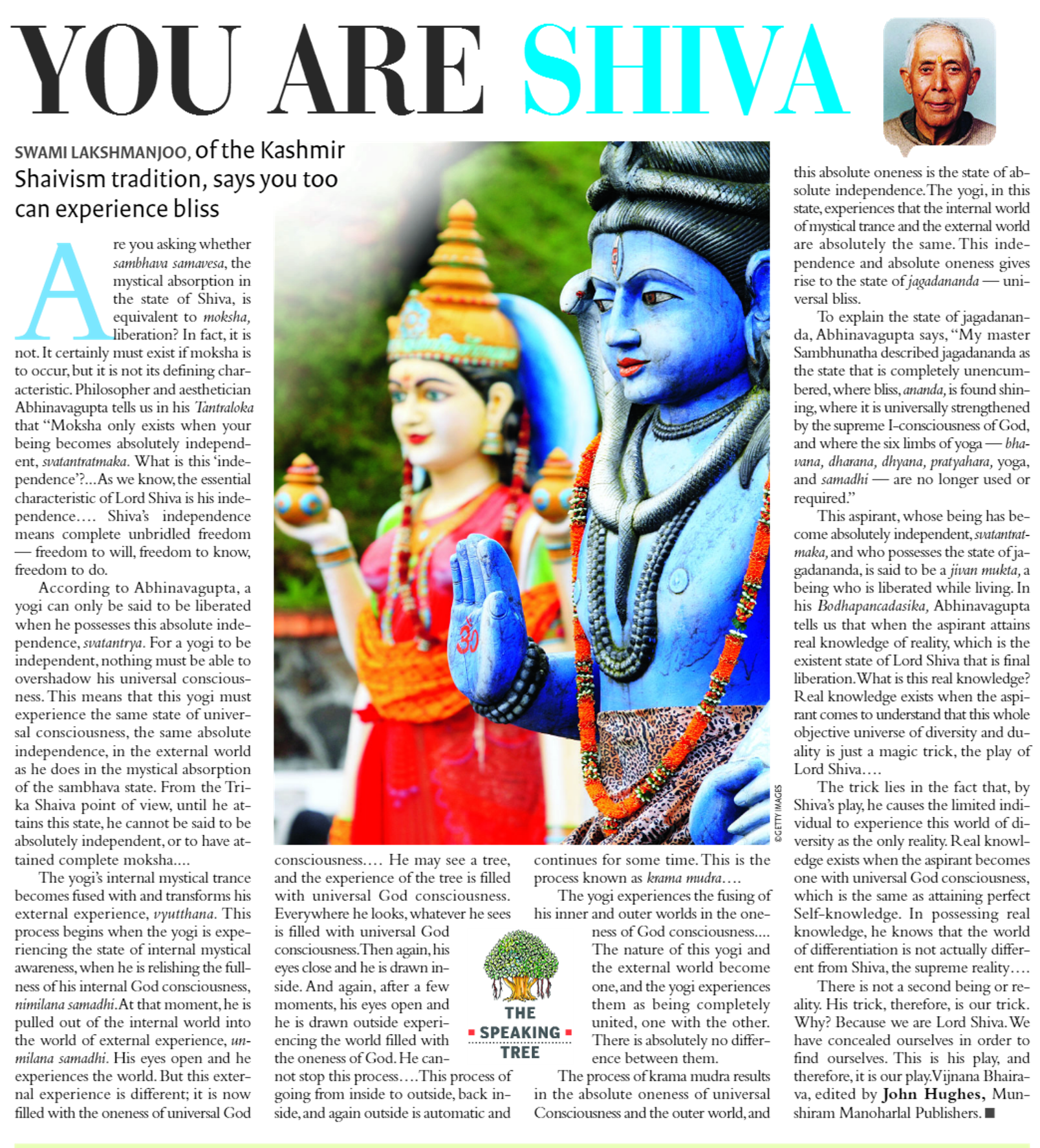 Swami Lakshmanjoo, of the Kashmir Shaivism tradition, says you too can experience bliss

Are you asking whether sambhava samavesa, the mystical absorption in the state of Shiva, is equivalent to moksha, liberation? In fact, it is not. It certainly must exist if moksha is to occur, but it is not its defining characteristic. Philosopher and aesthetician Abhinavagupta tells us in his Tantraloka that “Moksha only exists when your being becomes absolutely independent, svatantratmaka. What is this ‘independence’?… As we know, the essential characteristic of Lord Shiva is his independence…. Shiva’s independence means complete unbridled freedom — freedom to will, freedom to know, freedom to do.

According to Abhinavagupta, a yogi can only be said to be liberated when he possesses this absolute independence, svatantrya. For a yogi to be independent, nothing must be able to overshadow his universal consciousness. This means that this yogi must experience the same state of universal consciousness, the same absolute independence, in the external world as he does in the mystical absorption of the sambhava state. From the Trika Shaiva point of view, until he attains this state, he cannot be said to be absolutely independent, or to have attained complete moksha….

To explain the state of jagadananda, Abhinavagupta says, “My master Sambhunatha described jagadananda as the state that is completely unencumbered, where bliss, ananda, is found shining, where it is universally strengthened by the supreme I-consciousness of God, and where the six limbs of yoga — bhavana, dharana, dhyana, pratyahara, yoga, and samadhi — are no longer used or required.”

This aspirant, whose being has become absolutely independent, svatantratmaka, and who possesses the state of jagadananda, is said to be a jivan mukta, a being who is liberated while living. In his Bodhapancadasika, Abhinavagupta tells us that when the aspirant attains real knowledge of reality, which is the existent state of Lord Shiva that is final liberation. What is this real knowledge? Real knowledge exists when the aspirant comes to understand that this whole objective universe of diversity and duality is just a magic trick, the play of Lord Shiva….

The trick lies in the fact that, by Shiva’s play, he causes the limited individual to experience this world of diversity as the only reality. Real knowledge exists when the aspirant becomes one with universal God consciousness, which is the same as attaining perfect Self-knowledge. In possessing real knowledge, he knows that the world of differentiation is not actually different from Shiva, the supreme reality….

There is not a second being or reality. His trick, therefore, is our trick. Why? Because we are Lord Shiva. We have concealed ourselves in order to find ourselves. This is his play, and therefore, it is our play. Vijnana Bhairava, edited by John Hughes, Munshiram Manoharlal Publishers.