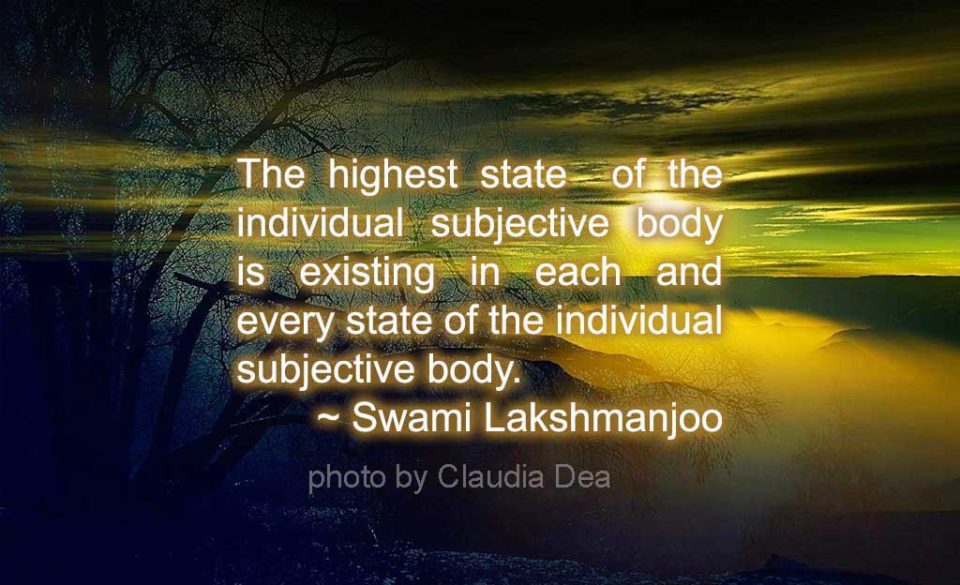 This lecture is a continuation from a previous lecture about the five Subjective States of awareness​ in Kashmir Shaivism. This is from the 11th Chapter of Kashmir Shaivism: The Secret Supreme, revealed by Swami Lakshmanjoo.

Here Swamiji explains the three​ states of turya and why there is not a fourth state of turya. Then he goes on to explain the state of turyātīta, which is above all the others. 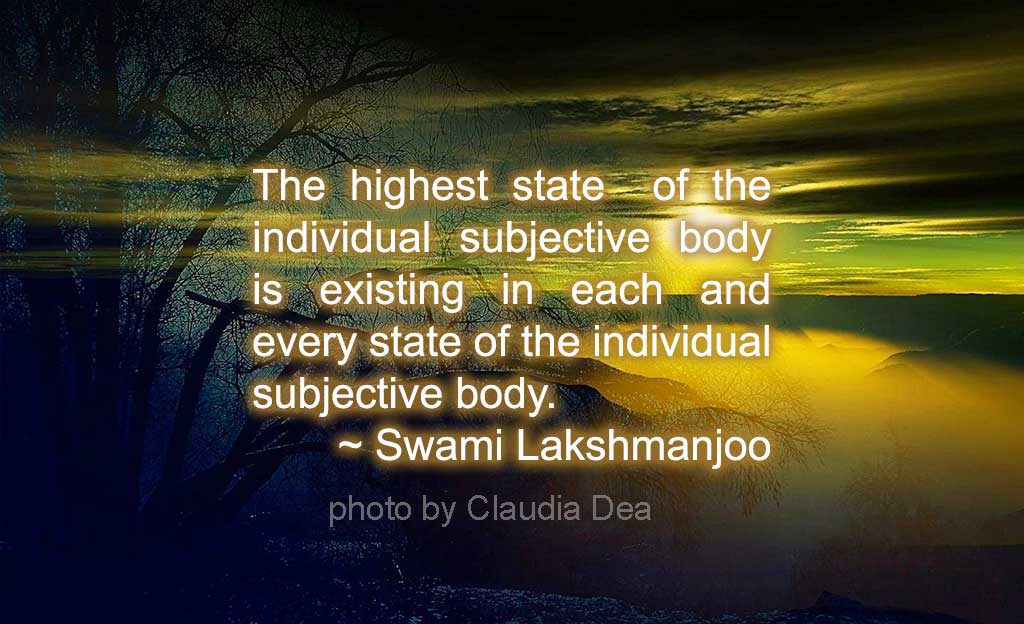 5 States of the Individual Subjective Body

The state of turya is said to be the penetration of all energies simultaneously, not in succession. All of the energies are residing there but are not in manifestation. They are all together without distinction. Turya is called savyāpārā because all of the energies get their power to function in that state. At the same time, this state is known as anāmayā because it remains unagitated by all of these energies.

Three names are attributed to this state—by worldly people, by yogins, and by illuminated humans (jñānīs). Worldly people call it turya, which means “the fourth.” They use this name because they have no descriptive name for this state. They are unaware of this state and, not having experienced it, simply call it the fourth state. Yogins have attributed the name rūpātītā to this condition because this state has surpassed “the touch of one’s self” and is “the establishment of one’s self.” The touch of one’s self was found in sound sleep; however, the establishment of one’s self takes place in turya. For illuminated humans, jñānīs, the entire universal existence is found in this state of turya, collectively, as undifferentiated, in the state of totality. There is no succession here. Jñānīs, therefore, call this state pracaya.

Now I’ll explain the names given to the states of turya jāgrat, turya svapna, and turya suṣupti. Only these three states are possible in turya. As turya cannot be divided, turya turya is not possible. The preceding states of individual subjective consciousness, jāgrat, svapna, and suṣupti, each have four aspects; the state of turya has only three.

Turyātīta is that state which is the absolute fullness of Self. It is filled with all consciousness and bliss. It is really the last and the supreme state of the Self. You not only find this state of turyātīta in samādhi, you also find it in each and every activity of the world. In this state, there is no possibility for the practice of yoga. If you can practice yoga, then you are not in turyātīta. In practicing yoga, there is the intention of going somewhere. Here, there is nowhere to go, nothing to achieve. As concentration does not exist here, the existence of the helping hand of yoga is not possible.

There are only two names actually attributed to this state of turyātīta, one given by worldly people and one by jñānīs. Worldly people, because they know nothing about the state, call it turyātīta, which means “that state which is beyond the fourth.” Jñānīs, on the other hand, have a name for it. They call it mahāpracaya, which means “the unlimited and unexplainable supreme totality.” Yogins do not actually attribute any name to this state because they have no knowledge of it. It is completely outside of their experience. Yogins have though, through the use of their imagination and guesswork, imagined one name which might be appropriate for this state: satatoditam which means “that state which has no pause, no break.” It is a break-less and unitary state. In samādhi it is there. When samādhi is absent, it is there. In the worldly state it is there. In the dreaming state, it is there. And in the state of deep sleep, it is there. In each and every state of the individual subjective body, it is there.

I have explained the nature of these five states of individual subjectivity from the Trika point of view. In the Pratyabhijñā philosophy, the masters of the Pratyabhijñā School have also explained and defined these five states. Their definitions of jāgrat, svapna, and suṣupti seem to differ somewhat from that given by the Trika Śaivites. Their explanations of turya and turyātīta, however, are the same.

So this is general definition of these five states.

*Turyātitā, beyond the fourth, is not found mixed with any other state. Turyātitā is absolute. In turyātitā, there is no contact of either objectivity or subjectivity. It is for this reason that only four different modes are to be found in each of the four states of the individual subjective body. Turyātitā is not explained nor is it recognized in this context.