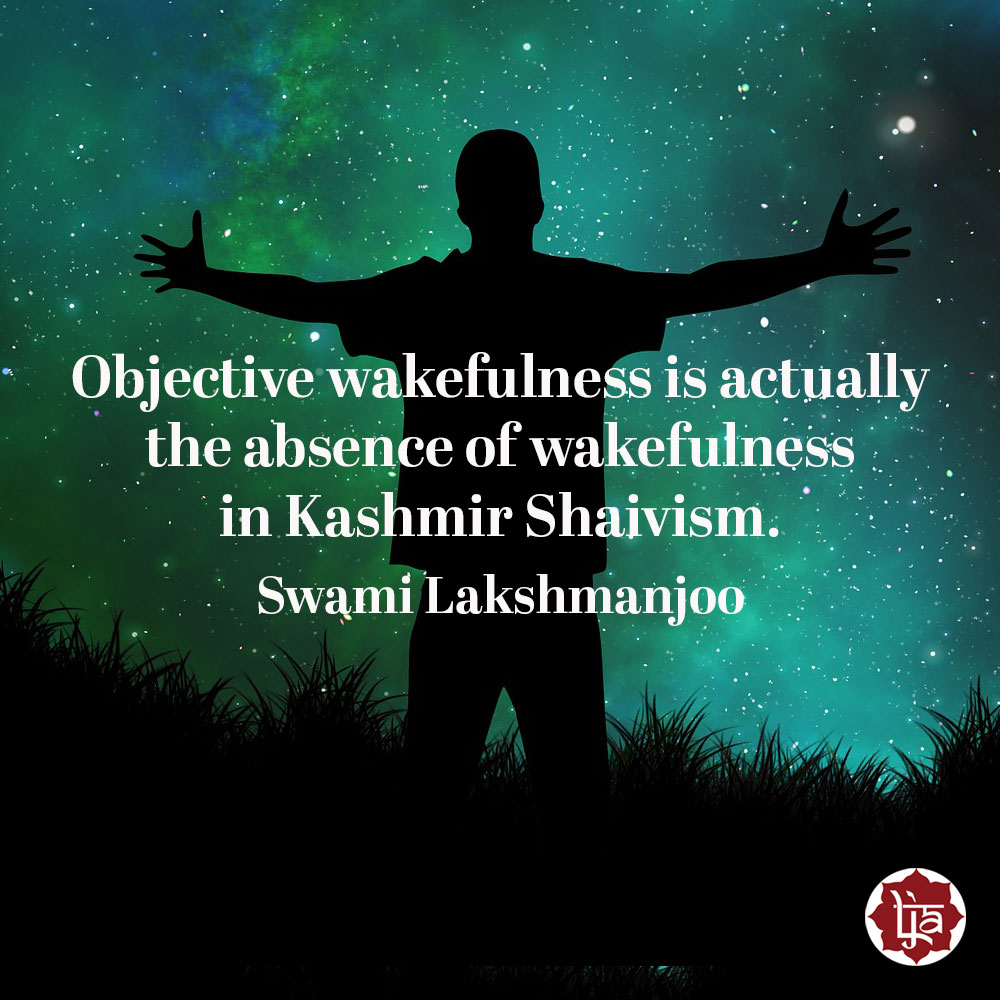 Swami Lakshmanjoo explains why objective wakefulness is actually the absence of wakefulness in Kashmir Shaivism.

This excerpt is from the 11th Chapter of the book, Kashmir Shaivism: The Secret Supreme, revealed by Swami Lakshmanjoo.

This lecture is a continuation of a previous lecture about the 5 subjective states in Kashmir Shaivism. In the next part, Swami Lakshmanjoo talks about jāgrat (wakefulness) and svapna (the dreaming state). 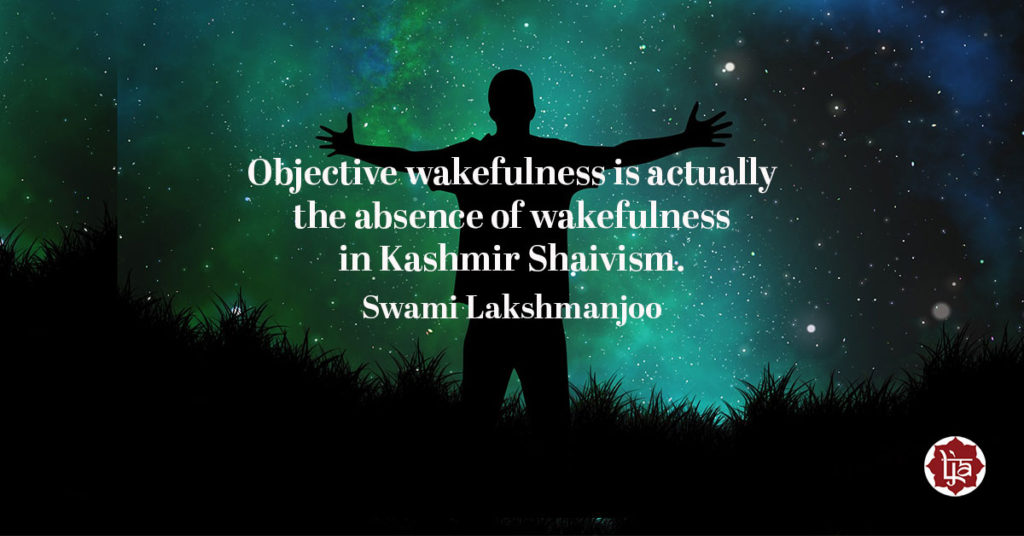 First, let us take the state of jāgrat, wakefulness, and see how these four exist in the waking state. The first state is jāgrat jāgrat, wakefulness in the world of wakefulness. Actually, this objective wakefulness is the absence of wakefulness in the real sense because in this state you are fully given to the world of objectivity and you completely lose consciousness of your subjectivity. This is the state of complete objectivity. People who exist here are totally given to the objective world. They are never conscious of their self. They are absolutely unaware. They never ask the question, “Who am I?” When they observe an object, such as a pot, they become completely one with that object and lose the consciousness that they are observers. In Śaivism we call this state abuddhaḥ, the state of absolute unawareness.

The next state is called jāgrat svapna, dreaming in the state of wakefulness. When subjective consciousness enters into objective consciousness and then loses awareness of that objectivity and lives only in the impressions of objectivity while in wakefulness, this is dreaming in the state of wakefulness. For instance, when, in the objective world, you look at a particular person and you are not aware of looking at that person, then you are traveling in your own impressions; this is jāgrat svapna. In ordinary worldly life when a person is in the state of jāgrat svapna, we say that he is daydreaming or that he is lost in thought. In our philosophy, we call this state budhāvasthā, that state which has some awareness, some consciousness.

Also in svapna, the dreaming state, where you travel only in impressions, the four modes of jāgrat, svapna, suṣupti, and turya are to be found. Svapna is the state found in dreaming, in impressions, in memory, in madness, and in intoxication.

The first state in svapna is known as svapna jāgrat, wakefulness in the state of dreaming. When the subjective body travels in impressions and is given to those impressions in the field of objectivity and, at the same time, loses consciousness of those impressions, this is the state of individuality called svapna jāgrat. Here, this individual sometimes travels in the waves of impressions and sometimes travels in the waves of objectivity. For example, if in a dream you see a pencil and then, when you look again, you see a knife in place of the pencil, you are not conscious of this change. You do not ask the question, “Why is there now a knife where there once was a pencil?” Everything in this state, normal or abnormal, seems normal and ordinary to you. It is objective because you are given to objectivity and are lost in the object, which in this example is the pencil. The question, “How is this so?” does not arise in your mind. This state in Śaivism is called gatāgatam, which means “you come and you go,” sometimes it is a pencil and sometimes it is not a pencil.

The next state found in svapna, the dreaming state, is called svapna svapna, dreaming in the state of dreaming. In this state, the individual subjective body travels only in the world of impressions without the least awareness of their connection of one to the other. You see a pencil, then you see a book, then you fly in the air, then you are driving an automobile, and yet you are not aware of any of this. You feel that everything is perfectly okay. In our Śaivism, this state is called suvikṣiptam, “absolutely dispersed consciousness.” You travel here and there, you do this and that, and yet you do not know anything.

The third state found in svapna is called svapna suṣupti, “deep sleep in the state of dreaming.” Sometimes in the dreaming state, this subjective body, while traveling in the world of impressions and thoughts, also develops some awareness of subjectivity. If, for example, you were to see a pencil in a dream and then in the next moment you were to see a knife in place of the pencil, you would wonder why the pencil has become a knife. You realize that you are not awake, that you must be dreaming. You are traveling in subjectivity; however, that subjectivity does not remain. Because this state is suṣupti in the state of dreaming, your subjective consciousness comes and goes. You question and argue and then you forget, you lose this consciousness and are again traveling in impressions. This state of individuality is called saṁgatam, which means “touched.” Here, you experience the occasional touch of consciousness.

Read more on how this individual subjective body travels in each state in detail
in Chapter 11 of Kashmir Shaivism: The Secret Supreme,
revealed by Swami Lakshmanjoo